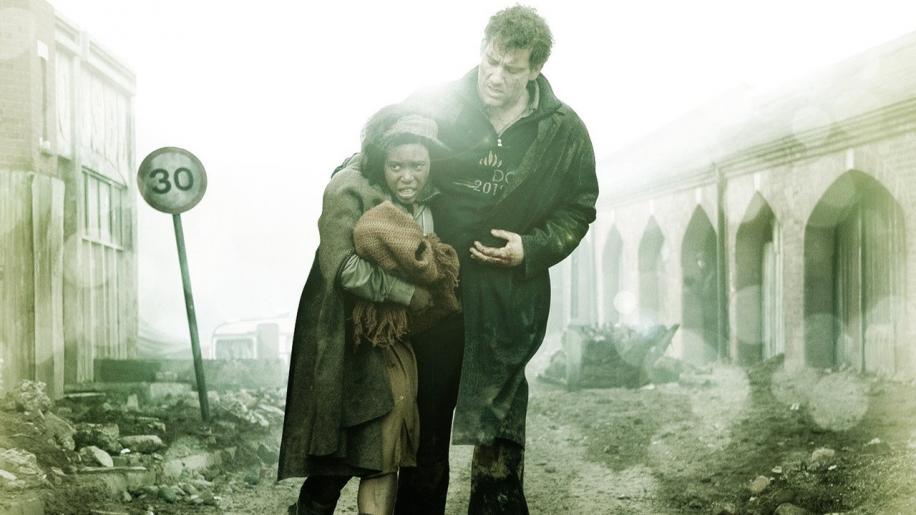 His acting skills honed on British TV drama, our own Clive Owen proved at a fairly early stage that he was a very capable actor indeed, and a defection to Hollywood was somewhat inevitable. With a few noteworthy supporting roles under his belt (his part in The Bourne Identity is one of the best cameo performances I have ever seen) and a couple of quality Film 4 productions to his name (including the superior Mike 'Get Carter' Hodges flick Croupier), he seemed like the obvious choice (and was voted by the public as being the viewer's choice) to play the new James Bond. Losing out to Daniel Craig, for whatever reason, came as something of a disappointment to fans of Owen, who would have liked to have seen what the versatile, broody, and charismatic actor could have done with the role. Even I wondered what would become of him without Bond to cement his star status. Would he forever be given lacklustre roles like that of King Arthur, which far from showcased his true talents? He managed to make the cynical relationship drama Closer much more engaging with his powerfully honest performance therein, provided an interesting bank robber opposite Denzel Washington in Spike Lee's competent if unexceptional Inside Man (and is working on a sequel) and carried his third of the faithful adaptation of Frank Miller's graphic novels, Sin City, but it was not until 2006's Children of Men that audiences finally saw what he was truly capable of. And perhaps without being hampered by the inherent typecasting restrictions that go with the 007 mantle global, his path will be clear for even more interesting projects.

It is 2027 and the future is looking bleak for mankind, as fertility has dropped off the scale and babies are no longer being born. Radical activists are fighting open battles within cities that are under martial law and bombings occur with expected regularity. With news of the death of the world's youngest person - aged 18 - former activist Theo Faron is drafted in by his once lover Julian to help the cause one last time. Julian needs him to escort a young girl across the military-controlled border and to the coast, and give her a chance of making contact with an almost-mythical organisation known as the Human Project, who are supposed to be trying to find a way to save mankind. Initially sceptical about the existence of such a group, and of carrying out such a mission, he soon finds merit in the cause itself, but not before a splinter faction of the already radical activists decided to take matters into their own hands. Will Theo be able to escape their clutches with his precious cargo and escort her safely across the dystopic battle-ravaged future landscapes, knowing that she is carrying the very future of the human race?

Painting a bleak picture of the future that is like something out of Orwell's 1984, Children of Men is a powerful thriller packed with tense action sequences that have a brutal, consequential reality about them. The poignant tale looks closely at human nature, the apathy that goes in tandem with the loss of dreams and of hope - what remaining purpose is there to life when you know that there is no future to the entire human race? More politically, it looks at the in-fighting, rioting, and rebellions that form on both sides of the law - within the supposedly cause-driven activists' camp (quite a sympathetic, yet realistic portrayal of terrorism - and its own twisted ideals), and across the wire within the ranks of the corrupt military and police force. And when a hope emerges - like a single plant in an arid desert - will all these people be able to cope with the resulting change, or will some try and fight it, or use it to gain power?

Written and directed by Alfonso Cuaron, whose myriad film history includes Y Tu Mama Tambien, the Great Expectations remake and even a Harry Potter instalment, the film has got to be one of the best 'bleak future sci-fi' productions in the last few years - far superior to that overblown special effects extravaganza The Day the Earth Stood Still, using smaller scale incidents and scenes to hammer home the oppressive scenario, rather than personality-less effects that are so grand they feel like they have no consequence. Here every detail adds to the impact - feel the desperation as Theo tries to jump-start a car, shoe-less and slipping in the mud, the panic as the car is attacked from all sides down a country road by bikers and an angry mob, lobbing molotovs and shooting at them. Using long, well-constructed shots he manages to keep the tension going for what seems like an eternity, making you feel on the edge of your seat throughout, and positively exhausted by the end of it all. Apparently the car sequence - which involved a camera that could rotate 360 degrees about the inside of the vehicle - was a continuous 4 minute ambush sequence that took a considerable time to perfect. Similarly, the final act's massive military siege scene is also one brutal, shell-shocking take lasting over 6 minutes. They are some of the most memorable action sequences committed to film of late, and they could not have been present in a more worthy movie.

Of course, beyond the story and the amazing set-pieces, it is the actors and their characters that bring further depth to this potent mix, and this is probably Clive Owen's best performance to date. If we have to sacrifice the possibility of seeing his version of Bond in order to get heroes like this out of him instead, then the price was worth it - his beleaguered, cynic al everyman lead character here never even picks up a gun despite the fact that all around him are carrying, threatening with or shooting them. The subtle touches about regret and past loss, the reaction he has to the death of those close to him, the determination he exudes in stressful situations, Owen brings a humanity and depth, and even a dry wit to the character that few would pull off. Almost the entire movie is shot from his perspective, events occurring as he sees them, and as he lives through them, giving a first person impression without ever having to shoot it in an overtly first-person way. In addition to this reporter-like angle, we get a 'first person' sound design which actually allows the viewer to practically 'hear' what the lead Theo is hearing throughout the film, whether the clandestine discussion in another room or the explosions and subsequent 'ringing in your ears' afterwards. Many films now use this 'ringing' effect but here it really works well, totally putting you in Theo's boots - Clive Owen's shoes. And Owen's facial expressions, behaviour and reactions of shock and pain and angst seem to be exactly what you might feel in that position - fear, panic, determination, making the consequences of the movie and threats to his life yet more potent. Daniel Craig could not pull off this role.

Owen is ably assisted by many familiar faces, with an outstanding Lennon-esque performance by Michael Caine as one of his old friends, a decent enough cameo by Julianne Moore as his activist ex (although I have no idea why she warrants top billing) and another powerful performance by Serenity's Chiwetel Ejifor (who is also superb in the little-known Mamet-scripted Redbelt) as one of the more 'extreme' activists, as well as noteworthy cameos by both Danny Huston (The Proposition, Wolverine) and Peter Mullan (scarily excellent in the recent and extremely dark Channel 4 series, Red Riding). Clare-Hope Ashitey is also pretty good in one of her only film roles, here playing the precious cargo and potential future of mankind, the young girl Kee, who Theo has to get to the Human Project.

A modern-day classic, Children of Men is a powerful, poignant action-thriller, set within a painfully realistic, authentically bleak dystopian future. It will, engage you, entertain you and even move you, making for compelling, gripping viewing - with the script, story, actors, characters, stunts and set-pieces all coming together near-perfectly. Highly recommended, this is one of those movies that is destined to make many viewers' top film lists.

“I can't really remember when I last had any hope, and I certainly can't remember when anyone else did either. Because really, since women stopped being able to have babies, what's left to hope for?”