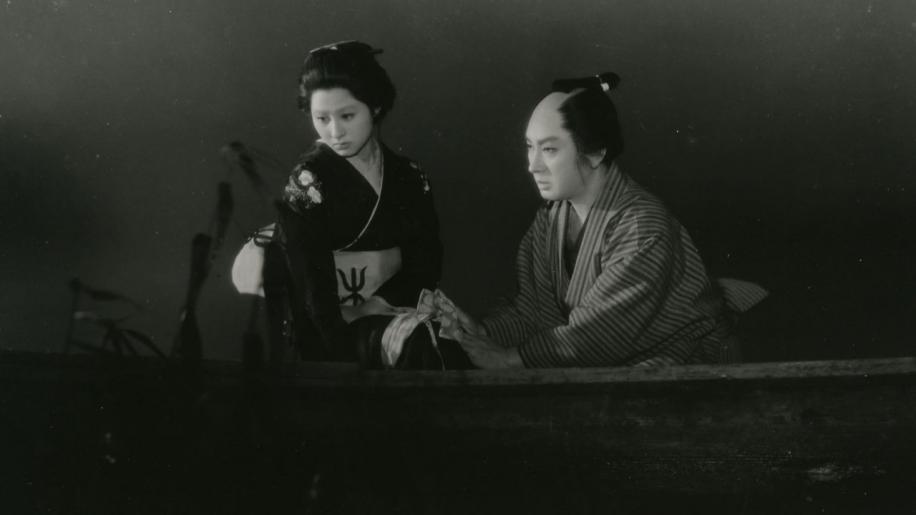 The film is presented in a full frame black & white 1.33:1 ratio. The disc is a standard definition dvd encoded as MPEG-2 and the feature has undergone restoration and re-mastering. The image though, still lacks great contrast and the depth of blacks is quite disappointing overall. Whilst age has probably played its part on the original material, the transfer to its credit holds up far better than 'Owasa no onna' which was also made in the same year. On the left hand side of the image there is a continuous 1” band of fading that is ever present throughout the movie. Once again this is quite likely due to deterioration of the film over time. You have to make allowance that the film is over 50 years old now. The disc also includes an un-restored original teaser and original trailer. Evidence of what age can do to a film is clear to see if you watch both of these. On the whole the video presentation of the movie is admirable but still falls short of higher standards. The score that accompanies the movie suitably befits the whole storyline. It's dour and sombre but there is enough there to add a suitable degree of sobriety to proceedings. The dialogue is clear and the voices are also quite remarkably smoothed off. It's actually a rather polished effort in the audio department considering its age. Everything is presented as a Dolby Digital 2.0 soundtrack although it remains a mono-aural mix. Subtitling is available as an English only option and the translation appears to have been done very well. Watching a foreign film of this age can be difficult. Much importance therefore goes on the subtitles to present the story and translation in such a lucid way that the viewer can appreciate, without it all becoming obtrusive to the film. Overall the audio package is simply a competent offering. The main menu gives you the option of watching the movie with or without English subtitles. You also get three extras, one is Tony Rayn on Chikamatsu Monogatari, an original teaser and the original trailer.

Tony Rayn on Chikamatsu Monogatari - (13mins 7secs) Tony Rayn is presented in black & white and in a 1.33:1 ratio. He explains who Chikamatsu was in Japanese history and the play that the movie is actually derived from. Tony also speaks about Mizoguchi and his rumoured approach whilst making this film and how his personal life was affected by his split with Kinuyo Tanaka . As always Tony Rayn's knowledge of East Asian Cinema is highly impressive and it's a pleasure to listen to such a devotee talk about the works of Mizoguchi.

Original teaser - (2mins 6secs) a short clip about the movie and some behind the scenes footage of the actors as well as glimpses of Mizoguchi at work himself.

Original trailer - (3mins 51secs) the original theatrical trailer is included on this disc. This is un-restored and you can see the toll over 50 years of age has on the film medium itself. Chikamatsu Monogatari was one of three films Mizoguchi made in 1954. That is quite an achievement for anyone to deliver including from a master filmmaker. It's made all the more so considering that this film was made only 5 months after 'Uwasa no onna' and was remarkably filmed in only 28 days.
Whilst it obviously has the hallmarks of Mizoguchi, it lacks any real sentimental depth that is usually so evident. It is apparent in many ways that he must have gone through the motions in simply making this film in as short a time as possible. That's not to say everything was done in anything other than a professional manner. The sets are immaculate, the acting elegant, the mood very sombre and the shots are beautifully composed. You are actually conveyed back to 17th century Japan in quite convincing form.
You may find that the drama on offer is quite slow and also find it all a bit tedious for the first half of the film. However, it is worth persevering with as things do pick up in the second half. As a film it is generally not considered as one of Mizoguchi's better works and it is rumoured that he was never enamoured or as immersed into the project as maybe he should have been when he made it. Still, the strength of the original play by Chikamatsu really does hold this film together and the storyline gives it an admirable virtue. The disc comes available as part of a two-disc set that includes both 'Chikamatsu Monogatari' & 'Uwasa no onna' I suppose this does go someway in helping make it an attractive proposition for Mizoguchi fans.