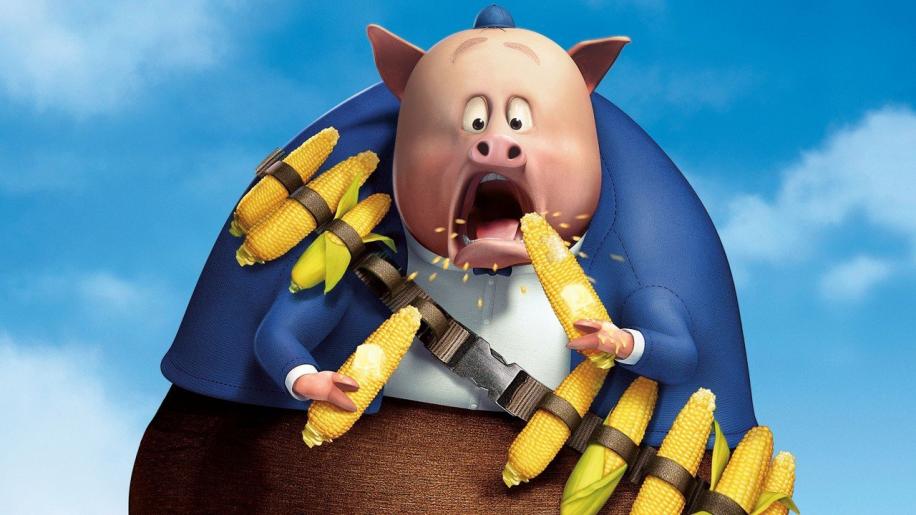 The Sky is Falling! is a fable that can be traced back, unbelievably, to Buddhist teachings some twenty five centuries ago, though its most common reference, with the identifiable characters that are associated with it, is from an early nineteenth century tale where the main character, Chicken Licken/Little or Henny Penny, incites panic in his friends after he mistakenly believes the ‘sky is falling’ when an acorn falls on his head, as such the phrase “The sky is falling” has become associated with a mistaken belief in imminent disaster. Used to teach about thinking for yourself, finding evidence, mistrust in unsolicited advice and other such ideas, the fable has endured due to its simplistic storytelling, neat premise and easy understand-ability. Indeed there have been many short stories written, and filmed, about it not least by tonight’s esteemed makers Disney who tackled the story, as written, in 1943. However, tonight’s feature is only very loosely based on the original prose; in fact, the opening few minutes neatly encompass the entire fable whereby our protagonist, Chicken Little, rings the alarm bell inciting much panic and when questioned why, his assertion that the ‘sky is falling’ falls on unbelieving ears, that is until an acorn bounces off his head leading to the conclusion that that is what happened in the first place. The film then uses this as a springboard for the rest of the story which picks up a year after these fateful events.

The character of Little is played with charming assuredness by Zach Braff, best known as JD in Scrubs, who manages to imbue the chicken with enough warmth and gumption that we inevitably side with him despite the craziness of his predicament. Since the ‘sky falling’ incident Little has to endure all sorts of teases and pranks levelled at him due to his outrageous statements; these he brushes off and happily uses his natural inventiveness to see him through the day – however, there is one person he wants to impress: his father. Buck "Ace" Cluck in his heyday was a superior athlete and star baseball player and held in good standing amongst his friends and peers alike, but now widowed and bringing up Little by himself, struggles to come to terms with being a ‘good’ parent and frequently takes to apologising for his son rather than believing in him. This emotional turmoil is the backbone for the story that follows as the very drive behind Little is to impress and make his father proud. Writer, producer, director and actor Garry Marshall gives voice to Buck who spends the majority of the film being depressed, resigned and apologetic, and it is only in the climactic chase that he finally emotes some enthusiasm; now while this reads like it’s a bad thing, in actual fact it brings the character to life in a way at we, and Little himself, have never seen – widening the emotion and giving more for the audience to hold on to.

Chicken Little himself is a very small chick, but despite his size is incredibly inventive and plucky; however due to his impetuous nature and the ‘sky falling’ incident is consigned to the ‘B’ team within the school pecking order. Thus his friends too share the ‘lower’ standing that comes with being ‘outcast’; Runt of the litter (voiced by Steve Zahn) is a huge pig with an even bigger heart, though easily frightened he has a knack for drawing resolve from song, Fish Out of Water (voiced by Dan Molina) is a goldfish that uses a divers helmet to live ‘out of water’ meaning his speech is unintelligible, though he is absolutely fearless and, finally, Abbagail Ducktail Mallard is Little’s closest friend, an ‘ugly duckling’ she too has a huge heart and wants to resolve Little’s parental issues by getting the pair to talk about their issues, she also has a secret crush on him. Abby is voiced by comedienne/actress Joan Cusack, who does her best kooky but endearing voice and maintains a credible chemistry with Braff’s Little. These four share a firm friendship and through it are able to survive the school days and ‘dodge-ball escapades’. It is in this latest lesson that Little, through a series of unfortunate events, accidentally sets off the school fire alarm and his father is called into school – this greatly deflates them both, and Little, on discovering about his father’s past glories resolves to follow in his footsteps and become a champion baseball player. Things, however, rarely work out to plan, particularly for our protagonist, but despite not being put into bat for any matches, a series of team injuries sees him called to bat to save the championship match – all he has to do is not swing, move on and let the star player win for the team. But not this time. Little draws his line in the sand and grasps the bull by the horns to take his place in his father’s heart. Of course it is only sheer luck and circumstance that sees him win the day, but for the first time the ‘sky falling’ incident is forgotten and Little becomes the toast of the town.

However, just when things are looking up, something comes crashing down – literally. And suddenly the world seems a lot smaller and the worst fears are actually true. Well, almost. From this point on the film enters the realm of pure science fiction, referencing everything from War of the Worlds to Independence Day yet it still remains true to its core values of parental bonding. For when the first invasion manages to, once again, make Little look like the fool he has been portrayed as, all that good will from the baseball win goes out the window and the town people and more especially his father sink into that depressed funk. Perhaps the biggest criticism could be levelled at this scene as it is purely there to tug on the heart strings and to make the climactic chase and eventual reconciliation seem all the more poignant, but Little was not alone this time; his friends were right there and knew exactly what went on, so how come he has to suffer alone? It’s a minor plot-hole and one that doesn’t derail the narrative, due to the strong scenes that surround it, however it irked me a little. The makers do a good job of keeping the suspense up with regard the perceived reason for the invasion in the first place – and when the actual reason is revealed it follows suit with what is going on in Little’s life which is a nice piece of symmetrical writing and rounds off the narrative extremely well. Nonetheless everything is wrapped up pretty quickly after this revelation, as if the writers had no-where else to go. The pacing of the story is quick as it is, we are in children’s animation territory after all, however that shouldn’t necessitate rapid exposition and conclusion; just look at any of Pixar’s entries. That’s not the case here, though, it's all about the pace, and towards the climax it becomes pretty frantic – even the slower reconciliation moments between Little and his father has Abby jigging about in the background reminding us that we need to get a move on. It’s not necessarily a bad thing, of course, the story does deliver everything it sets out to do and, apart from the last few minutes, doesn’t feel rushed, but it does give the film a ‘popcorn’ sense, in that there is nothing for the mind to hang on to and so is instantly forgettable.

Chicken Little was, incredibly, Disney’s first fully CG animated feature film, a mindboggling ten years after Pixar’s Toy Story, one wonders why it took them so long! Even more mindboggling is how computer generated the graphics look, even Toy Story has better detailing to its characters and environments. And with the slightly rushed story and quick empathy delivery, there really is nothing else to see, particularly with regard to eye candy; in short it looks cheap – lighting is bright and vivid, colours are bold yet centred around the primaries, and whilst you can argue that it is a ‘cartoon’ and meant to look like it, Cars, which was released at the same time, looks infinitely better both stylistically and especially with its backgrounds and lighting, irrespective of its more compelling story. It is the superior quality of Cars that convinced Disney to buy back Pixar as a wholly owned subsidiary and the rest, you could say, is history.

As for the Chicken? Well it’s a harmless little story that races along with none of the grandiose effects nor depth that one has come to expect with computer generated animation; that’s still best left to Pixar; but it is not without its charm and, with its short runtime, never outstays it’s welcome. It’s not a patch on Pixar, but then nothing is.