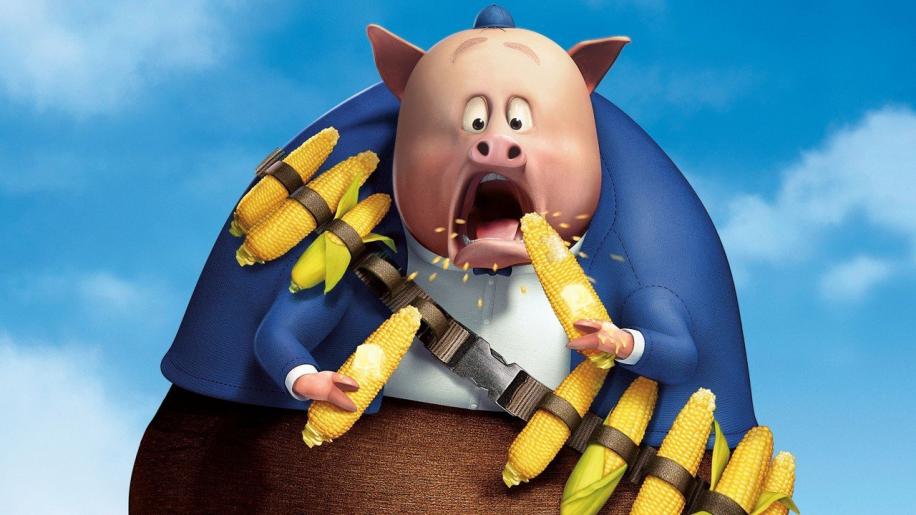 Coming in with an anamorphic 1.78:1 image, Chicken Little's transfer is nice and clean, but saddled with a softness that recalls the way Dreamwork's early animation was pale and limp when compared to Pixar's lush visual canvas. Colours are actually deep and reasonably strong, but they seem to project from a palette that has been downplayed and somewhat drained of vitality. Things do improve in the second half, the alien invasion act. From hereon in there is a delightful green theme at play - from the traces of the hexagon flying across the fake sky, to the myriad swirls, glowing lasers and flashing lights heralding the appearance of the alien ship. The green has a terrific throbbing light like the Kryptonite seen in the likes of Smallville. Many other colours finally come into play during the frantic final stretches of the film, but the spectrum still seems to lack the brightness and the life we've come to expect from animated features.

Detail isn't bad at all, but look at the vast swathes of grass, hedgerows and cornfields - we've certainly seen this done much better than this. But this is broad-stroke animation with no need of close 'n' clever finite detail, a quick spit and shine process to keep the kids happy. The scene in which the sky cracks apart and disgorges its alien armada looks terrific, though. Blacks are deep and the contrast is fairly accurate.

I had no problem with edge enhancement, blocking, smearing or pixellation. There is no grain or damage present and the picture is certainly pleasant to look at, but the overall impression is one of a film that is afraid to shine. That said though, this is still a fine transfer from the original. Chicken Little has a full Dolby Digital 5.1 mix that, at times, is very effective. Employing good, consistent use of the surrounds - it is constantly alive with hubbub, voices and activity - the mix is still decidedly family-friendly and couldn't possibly upset anyone no matter how loud it is played. But, whilst it may be quite active and entertaining, it never does anything that is particularly special. In fact, listen to how underwhelming the crowds' roar and the swelling music sound during the baseball game, despite utilising the full set-up.

Dialogue, songs and score are all decently showcased, and the effects offer a few nice instances of whiz-bang fun - especially once the aliens appear - but this is a Disney mix that seems to harness all the power and the bombast that other studios might have chosen to exploit, keeping the sound-design reined-in and under strict control at all times. It is well thought-out and features nice steerage across all the speakers, and the sub gets in on the act when the invasion begins with plenty of good-natured rumble and some decent-enough weight, but time and again, you can't help but wish that the mix would really let rip.

So, certainly not a bad track at all, just one that is heavily held in check. Don't get excited by what's on offer here, folks. This is bargain-basement stuff.

Commencing with some Deleted Scenes, which include three Alternative Openings and a small, and wholly superfluous, two-minute segment entitled Lunch Break, we don't really get much here of any worth. The Alternate Openings are just different stylistic slants on what we get in the finished film, and it is easy to see why they were dropped in favour of the Lion King-esque introduction that does front the movie. For the record, these are called Chicken Little Storybook (2.50 mins), Cooking With Klaus (6.10 mins) and Chicken Little As A Girl (2.05 mins). Presented as a mixture of animatics, storyboards and completed animation, the set are also introduced by Director Mark Dindal and Producer Randy Fulmer.

Next up comes the Making Of featurette. Entitled Hatching Chicken Little and running for 18.15 mins, this is very much your conventional, kid-friendly type of deal. Everyone is excitable, enthusiastic and totally devoid of genuine insight. All aspects of the film's production are covered, though not in any real detail, and the emphasis is squarely on how much fun they had making it and how much fun we're going to have watching it. We even get a tedious “Day in the life of” for Mark Dindal. This is second-rate fluff that nobody will ever return to.

Music And More is actually just a couple of music videos and a Chicken Little Karaoke/Sing Along. The videos are Shake Your Tail Feather (3.05 mins) from The Cheetah Girls and One Little Slip (2.50 mins) from The Barenaked Ladies.

Then we get an extremely tedious Where's Fish Trivia Game, which mixes questions with a rather pointless quest to find Fish. I can't imagine anybody, young or young at heart, sticking with this for long.Finally, rounding out the release are trailers for The Little Mermaid, The Wild, Dumbo Special Edition, Howl's Moving Castle, Airbuddies, Brother Bear 2, That's So Raven and Cars.

It's a lacklustre set ... but, given the un-ambitious release it accompanies, this is hardly surprising. Bright and bouncy but light on laughs, character and overall scenario, Chicken Little still flies by without becoming a bore. Kids may find it engaging whilst it is unfolding before them but, I feel, that they will be unlikely to return to it once the credits have begun to roll. Definitely a misstep for the House of Mouse and one that confirms Pixar to be the jewel in Disney's crown.

The DVD has a fine enough transfer, but some unappealing extras further sink the project in mediocrity. If the little ones liked this at the cinema, then sure ... go ahead. I'm sure they still will. But Chicken Little really is a wasted opportunity that will fade from memory in about as much time as it takes to boil an egg.