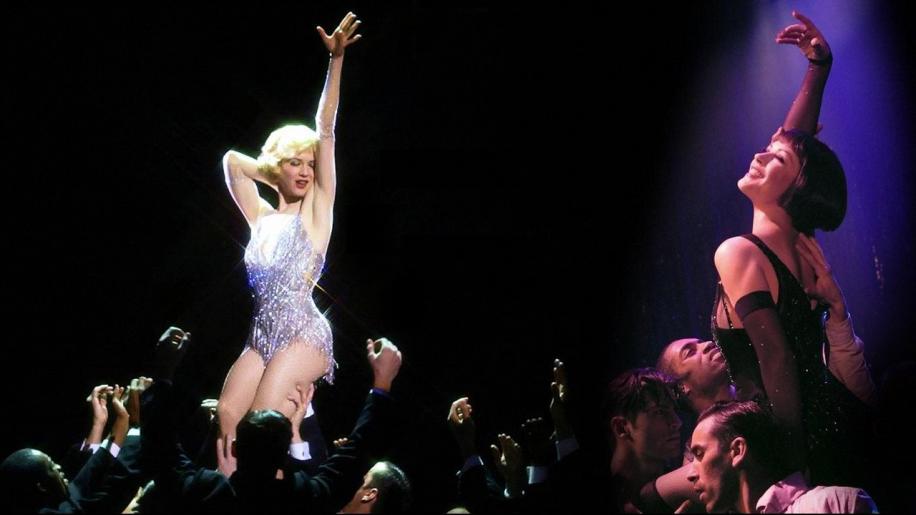 Earlier versions of Chicago had a superb print and image quality to them which was completely ruined by the level of grain. Both the R2 UK and Japanese editions, which I own suffered this quite shocking level of grain which I believe is unforgivable for a title that is A-list. Sadly, it seems that we're treated to that very same print here as I can't see any change in the volume of grain from my R2 Japan to this - and I checked! In terms of skin tones, everything looks natural and colours are vibrant, from the red neon glow of the Chicago logo in the opening through to the bright whites and contrasting colours in the finale. I didn't notice any artefacts present and the detail levels are high, from the opening on Zellwegger's eye to every fishnet stocking, it's all good stuff. But.......all that grain. Being a musical, it needs to sound good or else the musical numbers will fall flat. With both a Dolby Digital and DTS mix in 5.1, this had better hold up well and it does, but it's not any different to the previous versions either. That said, the original mix was very good, with clear vocals and a nice presence to the musical numbers, although I will say that the LFE isn't particularly worked out, it's not that important. From the slow start to the fast finish of “And All That Jazz”, the crescendo of “Cell Block Tango” and the comparatively calm “Mister Cellophane” all sound clear and crisp with excellent usage of the rear speakers giving a nice ambience and enveloping soundtrack. During the acting scenes where the story progresses, the dialogue is very clear and natural sounding without any need to increase/decrease the volume from the music. Of course, Dolby vs. DTS comparisons are inevitable and while the DTS is clearly slightly louder and has a slightly more natural sound, there's nothing to really split the two. I won't go over old ground for this release, suffice to say on Disk 1, we have the same commentary track and deleted song “Class” as the previous version. However, we also get the 27minute documentary “From Stage To Screen - The History of Chicago”, which discusses, among other things, the opening night thru to the casting and opening night of the movie itself. It features stars Chita Riviera and Jerry Orbach from the original stage show telling short stories of their experience and how Fosse would have loved the movie. Certainly interesting for those who want to know more about the original stage show. Disk 2 starts with the extended musical performances, which are for “And All That Jazz”, “When You're Good To Mama”, “Cell Block Tango”, “We Both Reached For The Gun”, “Mister Cellophane” and “All I Care About”, which aren't really extended as such, but what they are is actually far more interesting. What you get is the original song as seen in the movie, but it's interspersed with alternate angles or rehearsal footage and sometimes you see these on the same screen all at the same time in little windows. It's quite a nice way to get behind the scenes without the normal talk track or people playing to the camera. Of course, I'm biased when I say that Cell Block Tango is the best one, but honours do go to “And All That Jazz” as this was quite lengthy and you could see a lot of effort by Zeta-Jones in the rehearsals. On the second page of this part of the extras, we get “All I Care About”, “Nowadays” and “And All That Jazz” from Start to Finish. These are similarities to the aforementioned footage, but these are more focused on the rehearsal side of things, where we are treated to the stars and dancers rehearsing the numbers, see the stars recording the songs in the recording studios and also see the rehearsal gaffes. On the third page of the part of these extras, we get the rehearsals for “I Can't Do It Alone”, “Hot Honey Rag”, “We Both Reached For The Gun” and “Cell Block Tango”, well that's what the menu says - the Cell Block Tango is more behind the scenes than a rehearsal, but it's all good stuff to watch anyway. Chita Rivera's Encore is a 5:09 minute featurette where they focus on Chita Rivera's cameo in the movie, which is nice especially as before I didn't know who she was, but now I understand who she was in terms of Chicago and why she's in the movie. Nice to see the passing of the torch, so to speak. An Intimate Look at Director Rob Marshall is a 19:40 minute featurette about the director, complete with glowing testimonials from the stars. It's a little gushy at the beginning, but it is quite interesting to see him behind the scenes as the choreographer. Not bad. When Liza Minnelli Became Roxie Hart is a 13:15 featurette where we're informed how Liza helped out the show when the actress playing Roxie Hart feel ill and she offered to stand in (without publicity). It's also interesting as they have show her singing with Chita Rivera on the “Dinah” show the song “Nowadays” - apparently the only footage available of them performing a Chicago duet from the 70's. Certainly one extra that will appeal to fans. Next, we have 2 featurettes which feature on John Myhre, the production designer and Colleen Atwood, the costume designer. These possibly are here as both individuals won the Academy Awards for their relevant field as well as the fact that both of these contribute towards the overall look for the movie. It's not particularly fascinating but they are short enough to get an idea of their ideas and where they were coming from in their designs. Finally, we have the 35:49 minute featurette of VH1's “Behind the Move - Chicago”, which is a very typical making of featurette. I loved the anecdote for the bruising of Zeta-Jones legs, due to the strenuous rehearsals where she asked “Who wants to ice my thighs?” Of course, who could resist an offer like that? Still, it's full of facts, like did you know Richard Gere starred in Grease in the West End? Neither did I. Informative, but not groundbreaking as such. Overall, a considerable leap from the original release. I really like the movie, it is as stated one of the only musicals I can stomach, but I can't help but wish for a better transfer. Sound wise, this is as pleasing as ever and the extras are comprehensive, interesting and informative. The musical numbers just work very well and even if we wondered how odd the casting was at the time, it does work but I can't reiterate enough that this really needed a much better transfer. Oh well, it's the best edition to date extras wise and if you don't have the movie, there's much to like and appreciate here.