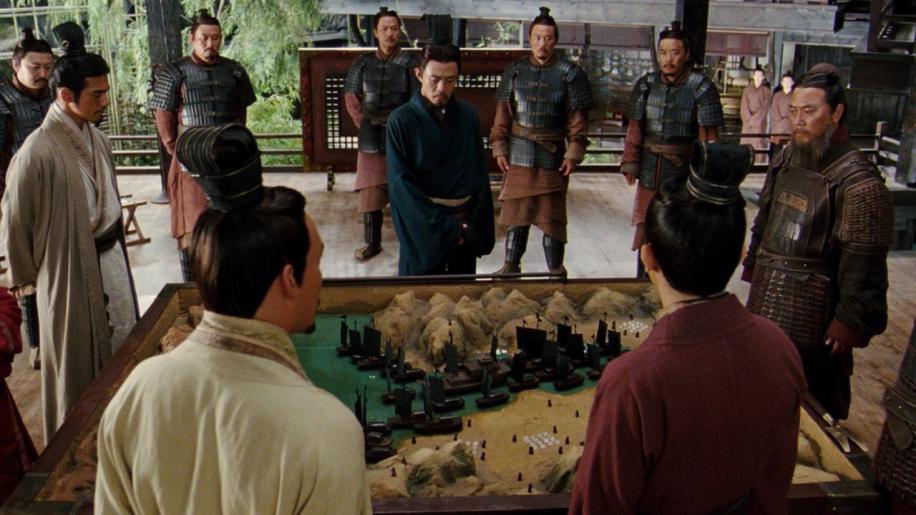 Having already reviewed John Woo's first instalment in the Red Cliff saga, it is with great pleasure that I finally get to see how the story concludes with this sequel. Not that it is indeed so much a sequel as a continuation of the same story. For those who are unaware, Red Cliff is a film adaptation of the classic Chinese text Romance of the Three Kingdoms. This tells the tale of a warmongering statesman, Prime Minister Cao Cao from the North, who convinces the weak Emperor Han to rally his armies in order to travel South and conquer the territories there by brutal force. He does so under the pretext of ending conflict and pre-emptive action against potential enemies, but his true motives are not so morally upstanding. Standing in his way are the leaders of the two kingdoms he intends to capture, Liu Bei and Sun Quan. Neither man is a great military force by himself but they both possess great generals and tacticians who, when combined, could make a potentially strong fighting alliance. Thus they choose to unite and fight their shared enemy rather than simply surrendering. Having won a few significant early battles, the forces of the South were still massively outnumbered and retreated to be pinned down in the coastal fort of Red Cliff, this is where the first film left the story, with our heroes looking out across a vast fleet of ships that seemingly stretched out to the horizon, moored across from their rocky stronghold.

As I mentioned, this is by film lore a sequel. However, like the Lord of the Rings films and the Kill Bill double bill, the production was continuous. Constructing some of the largest sets ever made and with a budget reported to be the most expensive foreign film of all time, this was never likely to hinge the possibility of whether the story would be concluded on box office returns, or the public's interest in what happened next. The story, which is said to be some eight hundred thousand words in its text format, would have been nigh on impossible to fit into the short space of a standard film's length. Thankfully the faith the Chinese still place in Woo, despite his arguable dip in creative output since moving to Hollywood, was great enough to have made splitting this mammoth tome into two separate cinematic outings viable. Whilst some may have argued that Kill Bill didn't necessarily warrant a double bill of feature films and that there was a lull in the pacing, the Red Cliff story falls far closer to that of The Lord of the Rings in that it is so great in size, in terms of source material, that to condense its weaving narratives would be to do a great disservice to the written word upon which it was based.

There is much change afoot in this second part though, as the emphasis shifts slightly. The first instalment focussed for a large amount of its two hour and twenty minutes running time on the brokering of the alliance between the two Southern kingdoms. Zhu-ge Liang, on behalf of Liu Bei, was sent to convince Sun Quan to join with his master's army and help rebel the invaders from the North. In between political discussions and musings on the nature of conflict, there were many scenes which served to establish characters. Centre stage were Zhu-ge Liang and Zhou Yu, Sun's top general and military tactician. Playful verbal sparring and the underlying themes of honour and duty to ones own as well as a greater cause, were all explored. These moments were the foundation of the relationship which brought the two kingdoms together and allowed the viewer to genuinely believe that an earnest decision had been made, the outcome of which could have been in question. What transpires fairly early in the sequel is the breaking of the alliance between the Southern states. I don't want to go into too much detail and spoil it for those who are eager to see this concluding chapter but what I can say is that it seems rushed. There is reason behind it, yet it never seems entirely logical that greater thought isn't put into the arrangement. One moment there is a united force opposing Cao Cao, the next it is halved. From a dramatic point of view, this only serves to ramp up the tension as the remaining beleaguered forces face an even more daunting task. The drawback is that by partially failing to draw out the painstaking nature of the decision to be made, the action comes across as that of impulse and almost betrayal. Characters that had been established as honourable men and profoundly contemplative figures, rush away in retreat without the slightest talk of reuniting or having a contingency plan. In one brushstroke, the cast of players is greatly reduced and some of the more colourful individuals are kept from the screen for some time. I wouldn't want the film to rewrite the story, rather I feel that more emphasis could have been placed upon what should be depicted as a painstaking decision for a man to choose the safety of his people above the honour of his own word.

This development has advantages, namely allowing for a greater inspection of the three central figures on the landscape. There are many relationships contained in Red Cliff, mainly those of duos sparring, but the triumvirate that dominates is surely that of Cao Cao, Zhu-ge Liang and Zhou Yu. Mind games abound as friend and foe alike try to impress their intelligence and will upon others of the three. Some times it is in the arena of war, yet there are notable moments when the burgeoning friendship of Zhu-ge and Zhou appears combative and testing. There is little in the way of action in the first hour, a departure from the first film which threw us into the midst of Liu Bei's plight and the fighting of his general Zhao Yun against an invading army wreaking carnage upon a village. Instead what Woo moves to the centre ground is the battle of wills. Like a chess match played out with people instead of pieces, the result is a slower pace but a story that builds, intending to heighten the pressure in this situation. Like a boiler ready to blow, this intensifies, hinting at the inevitable explosion that must surely happen once battle finally commences.

One of the problems with several characters fleeing and this slower pace is that Woo decided to sporadically fill time with a select few instances of comedy. Not only does this fail to hit the mark consistently with regards actually being funny, but it also detracts from the intense atmosphere of nerves and trepidation surrounding the situation as a whole. The saving grace of this infusion of a lighter mood is that we get to see more of Vicky Zhao as Shang Xiang and what has to be viewed as a progression of Woo's treatment of female characters. She is at once strong and able and yet when bedecked in her finery still holds an air of delicate femininity. The role often descends into light relief for the main plot in the first hour but there are instances when Zhao gets to flex her acting abilities and show subtle emotion. The feminine element of the film is quite apparent in the key ways the women of the cast are utilised during plot turns and shifts in tone. Lin Chi-ling shines even when given few lines as Xiao Quiao, Zhou Yu's wife and a sort of Helen of Troy figure for whom the war is partially fought. This though is always likely to fall as a secondary measure to the masculinity that this production hangs its name on; action sequences. The primary concern of most viewers will be the quality of the battles and whether they match the exquisite dance-like formations and ingenuity displayed in the first film.

Fortunately, although the vast majority of the film is without violent conflict, it saves all the dramatic action for the final act. Once the talking is dispensed with, what we are witness to is one of the most full blooded and protracted assaults on the senses eastern cinema has ever delivered. Considering the emphasis on the naval threat of Cao Cao's amassed fleet, I was a little worried that this may have been the focus of any further action, to the detriment of the ground based military tactics of part I. Instead, we are shown an invasion of sorts that is conclusive in its tactics. Ships sail loaded with explosives, fire is utilised as a valuable weapon, catapults hurl flaming objects, archers rain down arrows on their enemies, mounted soldiers break through barricades and opposing generals duel in the midst of the maelstrom. The visuals employed for these scenes are simply perfect as the night time naval fire fight gives way to a dusty early morning battle on land. In amongst the plethora of bodies flung to and fro by explosives and cut down by swords and arrows, we see some of the same creative strategies as in Red Cliff (part I), although they never approach matching the glorious formation used to ensnare enemy troops as was employed at the end of that film. Part II takes the approach of simply giving more. What starts out as more talking and more posturing gives way in the final chapter to more carnage, more bodies and more thunderous action. Yet for all this, the war ends on a sombre note of reflection, as ultimately the war benefits no one. The final meeting between Zhu-ge and Zhou gives both an indication of potential future conflict, drawing back to reveal a lush landscape and a message of optimism and beauty. Some have not appreciated this second instalment for its ponderous start and thus questionable pacing, but for me it is exactly what it should be; the concluding chapter of a longer story. When viewed in tandem with the first, it becomes a work that is arguably greater than the sum of its parts and feels akin to an epic fairy tale of sorts. Lines that hark on about the importance of the elements are finally brought to fruition once the war is waged proper and earth, air, fire and water all play their role. Personally, I have enjoyed both but found this film to be far more to my liking in terms of characterisation. We see Zhou's priorities tested, Sun Quan finally turning into a warrior, Xiao Quiao fulfilling a Helen of Troy role and placing herself between the two warring parties and all against a backdrop of Cao Cao's desperate struggle for power and slow mental unravelling. It isn't perfect, but it is pure entertainment and there's certainly enough substance to the narrative that even when bodies aren't falling, it is just as mesmerising.