Cheaper By The Dozen DVD Review 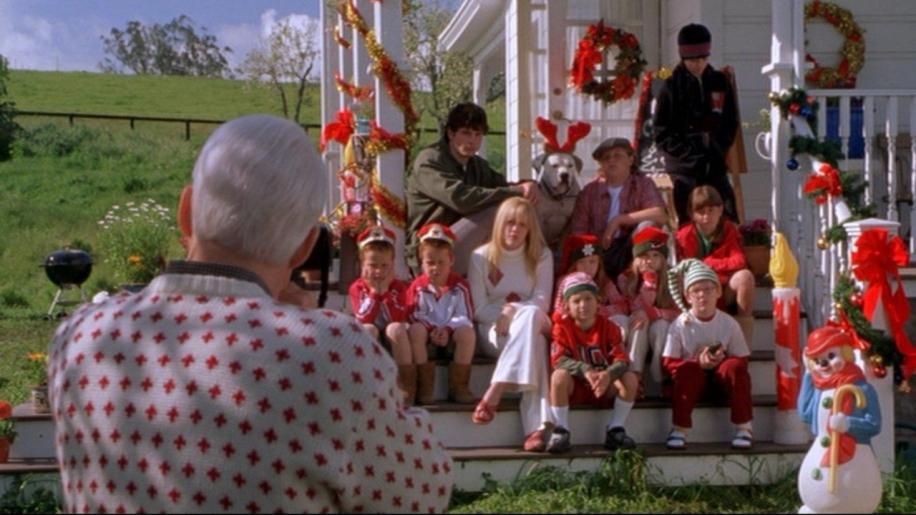 The DVD comes with both a widescreen and fullscreen presentation on either side of a DVD 18 disc. Both pictures offer a nice quality print. The movie is generally brightly lit and has a warm feel to the print, generally meaning a slight push towards the red end of the spectrum. This is confirmed by a warm glow to skin tones, and vibrant reds and magentas. All primary colours are vivid and clean, and the picture exhibits high levels of detail. The checked shirts and open weave of the woollen sweaters as the family take the Christmas card photos are clearly visible. Contrast is good, and further enhances the feelings of warmth. The Dolby Digital track is a 5.1 affair recorded at 448kbps. It is a run of the mill affair that fails to impress but does the unchallenging job in a competent manner. Voices are rich and warm, which matches both the tone of the movie and the picture quality. They remain nicely focussed, and some nice foley work is done to the left and right of the screen during the family mealtimes, and house moving scenes creating a nice ambience. The soundtrack opens out to the surrounds and is kept light and middle of the road. Not unsurprisingly this average movie gets a very average group of extras. The behind the scenes featurette repeats many of the comments and observations that director Shawn Levy reveals on the commentary track. Indeed apart from a few montage shots from the set, it is basically a five-minute interview with Levy. This brings us to the commentary tracks, for there are two. The first is with director Levy. Levy has a fast-talking, whiney voice that soon starts to annoy. The recollections are of how wonderful his whole team is from his star actors to the tea-lady. They provide some insight to the process of film production, but there is nothing you have never heard a hundred times before. The second track is from the Baker kids, and is as dreadful as the thought of listening to a room full of kids sounds. They giggle, they talk over each other, and they say “Ohmygod..” a lot. A few deleted scenes with optional commentary fill out the disc. This is a family movie but is directed very much at the younger end of the spectrum. Having the Baker kids provide one of the chat tracks for the disc highlights this. The picture and sound are fine but if you are over the age of 14 you won't care. You will be longingly hoping for the return of the wild and crazy guy who tickled ribs with is comedy classics.