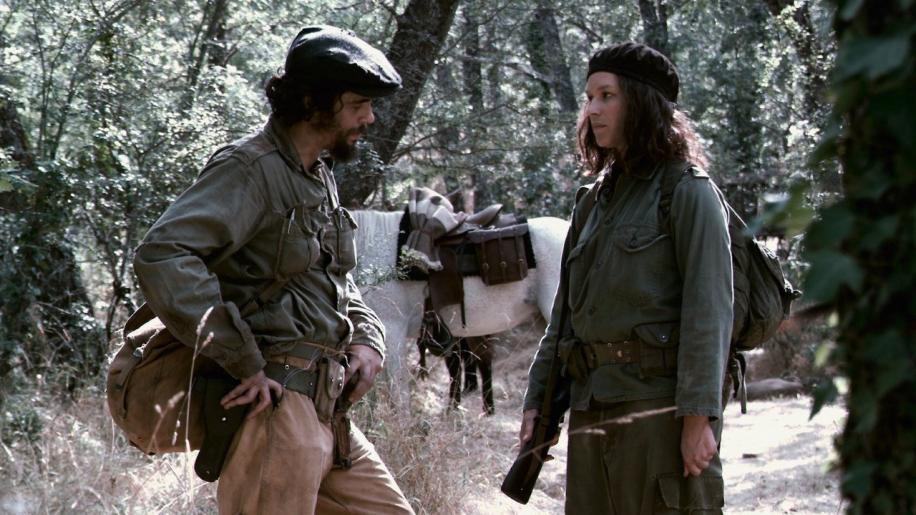 Che 'The Guerrilla' takes on a very different tone to the first instalment. Some people have flamed both these movies for not being the biopic that they should have been. What we get here in Part Two cements the fact that this project was something quite different to your average biopic.

Steven Soderbergh appears to have set out to make a pair of films that were an over the shoulders and impartial look at Ernesto Guevara. He's left out the heavy political undertone and opted to let the viewer decide which side of the fence they fall upon. However, it would be fair to say that both films take a rather sympathetic view of Che and the Communist ideals that he stood for.

After having overthrown Fulgencio Batista and helped install Castro as Prime Minister of Cuba, Guevara became known as the political face of the Communist revolution. His appearance at the United Nations in 1964 propelled him onto the global platform and he was soon recognised as one of its more distinctive faces.

Whereas Part One outlines the Cuban revolution; Part Two delves more into the physical aspects of one. Those looking for or perhaps expecting a more thorough background about the man may be disappointed. This second instalment is nothing of the sort.

The movie begins with a map of Latin America being uncovered. All the major countries of the continent are slowly highlighted. The date is then the 3rd October 1965 and a disconsolate Fidel Castro addresses the Cuban nation reading a letter from Che. Clearly Cuba had not been enough for him and mysteriously he had gone missing. Perhaps he felt he had achieved all that he needed to in Cuba and his cause needed to spread further afield?

Given the geography of the continent you can see why he chose Bolivia. I guess the simple thought must have been to overthrow the country slap bang in the middle of the South America; leaving the ripples of Communism to shape the political landscape all around. The theory was good but the execution was incredibly ill thought out.

Unfortunately Che demonstrated all his naiveties in this doomed venture; this really was a lost cause long before it even started. Whereas in Cuba, the revolt was led by a Cuban native, the Argentine accomplice was never seen as the main protagonist of events. In Bolivia, Guevara was simply an Argentine accompanied by some Cubans.

The film starts to move along when he enters Bolivia disguised as a member of the Organisation of American States. Once in the country he heads straight for the mountains to join a small group of rebels waiting for him at their training camp.

Even under the new alias of 'Ramon' and strict orders not to disclose that they were Cubans they could not hide the fact that they were outsiders. The Bolivian peasants have little or no association with these non-natives. It's clear that it is going to be incredibly difficult taking on volunteers and supporters of their cause.

Even though you can see the confidence gradually drain from the faces of the rebels, Guevara chooses to completely ignore some of the more blatant signs and warnings. Trying to tap into the Bolivian Communist Party, he meets with their representative Mario Monje (Lou Diamond Philips) only to be told that he is simply not welcome in the country. What the movie does well through this phase is highlight how the rebels are slowly suffocated of any political support or sympathy.

Castro had many concerns when he discovered Guevara was in Bolivia. When the Soviets instruct the BCP not to support him, he's left a man leading a small group of disparate rebels roaming the mountainous wilderness of Bolivia.

The Americans also waste little time in trying to suppress any form of a Communist uprising in South America. The Bolivian Government is forced to deny that Guevara is in their country for fear of causing an uprising. When the CIA meets with President Barrientos in Bolivia and offer to train his army with their weapons, equipment and surveillance techniques, that truly is the end; the rebels were dead ducks from thereon.

Even so, Che remained a man whose influence and inspiration went undeterred. He may have been far removed from Cuba but he was still revered across all of Latin America. You get a surprising and far reaching sense of the man and the feeling that even against all the odds, anything could still happen.

Soderbergh cleverly plots the weary lines of the truth dawning upon Che's face. His stubbornness, the defiance and the sheer dogged determination prevent him from seeing sense of the situation and fleeing the country. The apparent obliviousness to the peril he was in is astounding.

Plagued with a worsening asthmatic condition, the spluttering and wheezing Guevara looks a shadow of his former self. Soderbergh prepares you for his inevitable fall from glory in horribly efficient fashion. The small group of rebels are whittled off one by one and replaced by a growing sense of despair.

As the stakes draw closer the camera techniques employed start to accentuate and highlight the increasing desperation of the situation. The cinematography here is different from what you saw in Part One. There is far more freehand camera technique employed and the camera shake induces a panic stricken and claustrophobic feeling. The sad end is inevitable but all of the cinematography leading up to it remains stunning.

Perhaps 'The Guerrilla' is not as good as 'The Argentine' but Benicio Del Toro is in blisteringly brilliant form. I have admiration for any actor that can transform themselves so thoroughly. His performance in the first film was fantastic but in Part Two he becomes the Che Guevara that people were expecting to see. In many ways this second instalment does have some virtues of its own. The story is far simpler and the focus is on a physical struggle in the face of abandonment.

Both films do actually work independently of each other having a polarised approach. Unsurprisingly there is also a balance to be drawn between the pair and I would strongly suggest that you watch them together. Part Two is a shade behind the first film but still comes as recommended viewing.