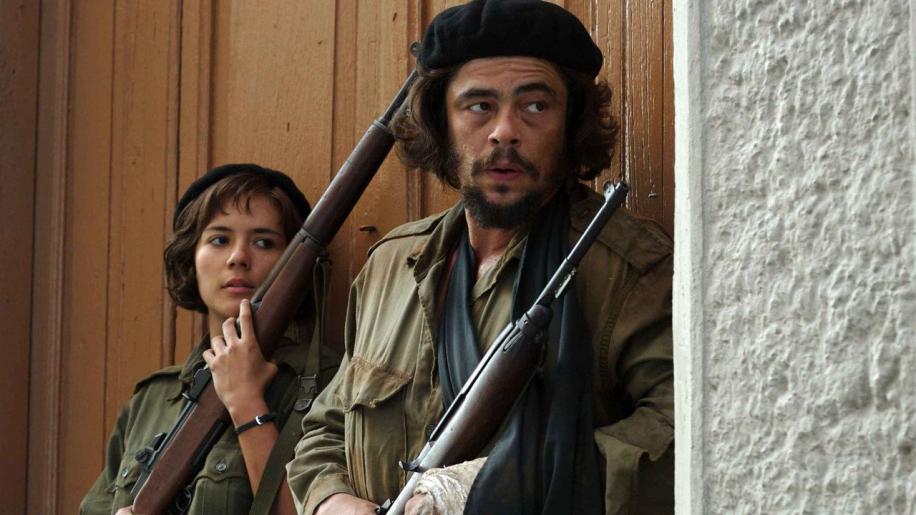 If ever there was a face that's been imprinted on many a t-shirt that has become recognisable the world over it's got to be this guy. Who he was and what he stood for however will probably be met with a more uncertain response. The name is 'Che'....Ernesto 'Che' Guevara to be exact.

Steven Soderbergh takes on the challenge of charting the life of one of the most interesting and yet quietly influential characters of the 20th Century and most certainly in the political history of Latin America. Whilst one film would never cover his life, this biopic is actually made up of two parts. Che Part 1 'The Argentine' and Che Part Two 'The Guerrilla'

The film starts with a long drawn out scene overlooking the map of Cuba, it's regions and major cities. As it opens up the time is July 1955 and you're at what appears to be a civilised dinner party somewhere in Mexico. Fidel Castro (Demian Bichir) and a small group of select friends are gathered after dinner planning a coup to overthrow the then Cuban dictator Fulgencia Batista. One of those guests was a man called Ernesto Guevara (Benicio Del Toro) who was actually an Argentine doctor. His origin made his allegiance to this Cuban cause all the more strange really?

In 1956 this small group of revolutionaries (about 80 strong) left Mexico by boat and set sail across to Cuba. What these guys initially lacked in military and physical might they more than compensated with the ability to win over hearts and minds. As Castro mobilised an army and gradually took over town by town using physical force it was actually Guevara who really turned the minds of the young and the not so young towards a unified cause.

Soderbergh purposefully concentrates Che Part One on the revolutionary years. Fidel Castro may have been the figurehead for the Cuban cause but the Argentine doctor became equally acclaimed or maybe more so as the 'real' revolutionary. This film tries to go about how he did just that progressing from being a field doctor right through to becoming a revolutionary commander.

Guevara would be the man to train the army to believe in what they fought for and to fight with their hearts and all their might. The Cuban people loved him and his revolutionary stance has left a distinct mark of principle upon the young the world over ever since.

In many ways the film lacks some grounding for the uninitiated. Obviously defining moments shape men like Guevara but there is none of that here. There is precious little of the man and why he has chosen to become like this. I guess if you want a story more about his formative years then 'The Motorcycle Diaries' is perhaps a film to use as a pre-cursor to this one.

Instead, Soderbergh chooses to track the army as it goes through Cuba and captures the essence of the revolution and the spirit that was encapsulated at the time. You appreciate the fine balance between the physical and the intellectual that he tries to portray through Benicio Del Toro. It's not all a softly, softly approach though. The battle for Santa Clara shows the brutality of the war that was taking place.

Unsurprisingly the film has Soderbergh's trademark style of editing and jarring techniques. You will find it tends to hop, skip and jump scenes and then return to whence it came. Part One essentially tracks the 1956-1959 Cuban Revolution but there is much politics thrown into the mix as well.

Ernesto Guevara addressed the United Nations in New York 1964 and the whole event appears to be accurately depicted with what happened there. There is a mix of black and white footage, snippets of interviews and an interesting view upon the smouldering relations that led to the rise of tensions between the USA and Cuba.

Acting performances remain strong throughout and Benicio Del Toro delivers a career defining moment. This film would have counted for nothing if the calibre of the lead wasn't up to the mark. He is genuinely believable as Guevara and I doubt he'll ever play a more suited part.

Che Part One is for all intensive purposes a must watch film. Whether you'll feel that you know more about the man after watching it though is rather more sceptical. This film is not an all emcompassing look at the man's life and Soderbergh never designed it to be. What you get instead is an intriguing look over the shoulder of an iconic figure of the last century and how he went about his remarkable revolutionary ways. As I say it's definitely worth a watch.