"I can’t sleep at night. I'm a lead programmer on a product that can revolutionize the power industry." 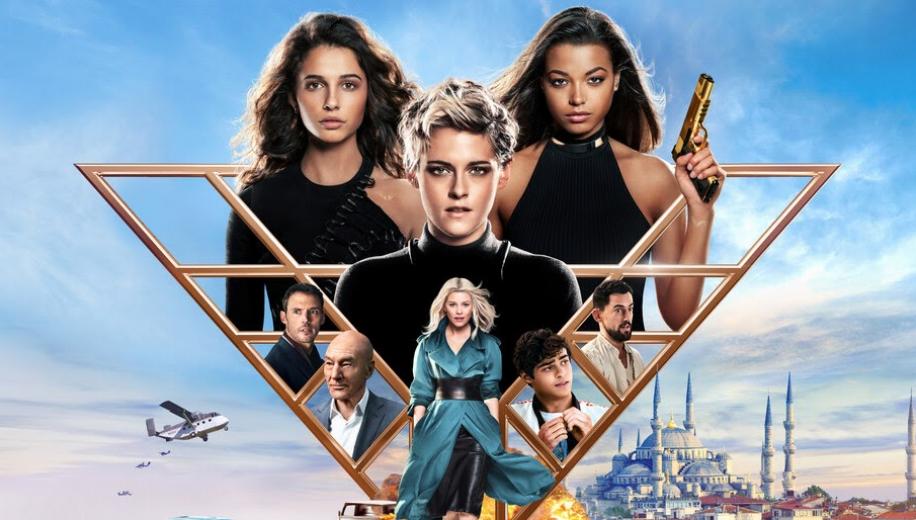 The frivolously fun 00s reboot movies were hardly game-changers, yet this vapid second reboot manages to somehow threatens to lower the bar, with only Kristen Stewart proving a fun, eccentric, distraction.

Clearly not a great deal of thought goes into the Charlie's Angels outings, with filmmakers across the last 20 years hardly seeking to reinvent the harmless but already throwaway original series as a decent Mission: Impossible-style franchise (or Man from UNCLE, for that matter), with the legs to run for a few iterations, which is a shame. Nonetheless, one of the few things that the first cycle of reboots successfully did was cast a decent trio of distinctive 'Angels' in the core roles, giving it a little comic edge and some superb chemistry between them.

Perhaps 20 years later nobody expected to find it hard to replace Cameron Diaz, Drew Barrymore and Lucy Liu, but this latest endeavour proves the opposite, with but one interesting member in the newly formed group of bland modern counterparts, fumbling their way around an ostensibly globe-trotting mission of debatably high stakes.

Kristen Stewart's off-the-cuff jokes are funny and fast, and it's almost enough to make you wonder whether the film might have been a whole lot better if they'd found a better duo to team her up with

With no significant plot to speak of - this is the kind of narrative you get in a 90s Jackie Chan action romp like First Strike - it's the cast that are the only hope of holding your attention, and whilst Naomi Scott was suitably alluring in Aladdin, she's second only to Denise Richards's Christmas Jones in the miscast-genius-scientists department (the mouse-cord whipping sequence is a particular low). Unknown Ella Balinski also disappoints with her TV-star-scale charisma - although it's more forgivable as it's her first major role - and it's left to the supporting cast (Patrick Stewart and Elizabeth Banks - who directs - get the more interesting parts) to make up the difference. Of the villains, Adrift's Sam Claflin acts like a petulant brat, but Westworld's Jonathan Tucker nails his menace, albeit woefully underused here.

Kristen Stewart, however, appears to be in her own entire world for this feature, and it's a wonderful, wacky, eccentric one which involves the best lines, best delivered too, as well as some fun mannerisms, moves and even faces (the face-pulling scene is just the kind of unpretentious heart the film needs more of). Her off-the-cuff jokes are funny and fast (the wedding line), and it's almost enough to make you wonder whether the film might have been a whole lot better if they'd found a better duo to team her up with.

Charlie's Angels earned a full 4K release for its US bow, but doesn't quite get the same fanfare here, presumably due to lacklustre Box Office returns, at least making for a shiny and largely demo Blu-ray release.

Detail is immaculate throughout. This is a very glossy presentation, lapping up the colourful locations and outfits, and picking up on the nuances and skin textures, as well as background flourishes. It's really quite hard to fault, even with the knowledge of a 4K alternative out there, few will have any complaints about this. The colour scheme is rich with striking primaries and neons, super-tanned skin tones, and supported by solid black levels with no signs of either any noise or digital defects. It's excellent, really.
﻿

There's no immersive audio track like the 4K release's DTS:X mix but the DTS-HD MA 5.1 track is a suitably bracing offering nonetheless, booming around the soundscape, engaging with its boisterous score, and peppy action sequences.

Dialogue comes across clearly and coherently throughout, dominating the frontal array, whilst effects get some keen dissemination over the surrounds, bringing the gunfights, fisticuffs, and chases to life with a suitably energetic vibe. It's not actually that big in scale, but the mix doesn't care - and neither does the score - which hardly distinguishes itself from the generic norm for these kinds of mid-tier reboots, but tries to keep you engaged nonetheless. It's a very good track.
﻿

Well at least we don't miss out on any 4K extras, as all of the 4K release's extras were relegated to the Blu-ray anyway, and remain therefore identical to what we have here, which is a solid if unspectacular set.

A solid in unspectacular set

There are a quartet of reasonably decent behind the scenes Featurettes fleshing out the new cast, director, action scenes and wardrobe, as well as a few unremarkable Deleted Scenes and a fun if short Gag Reel, as well as a Music Video and some Trailers.

It's unlikely anybody was expecting anything decent from the new Charlie's Angels reboot, which often threatens to disappoint those with such modest expectations, however a fun turn from Kristen Stewart (who continues to impress, even in some less impressive productions - c.f. Underwater) just about leaves it not an unpleasant watch, even if it is an utterly forgettable one.

Not an unpleasant watch, even if it is an utterly forgettable one

Sony's UK treatment of Charlie's Angels arguably signals their faith in the feature, as we don't even get the 4K disc that was released stateside. Nonetheless the Blu-ray is a very good one, with excellent video and audio and a decent salvo of extras. Fans should consider it a solid offering, although may well be tempted to import the 4K anyway.
﻿