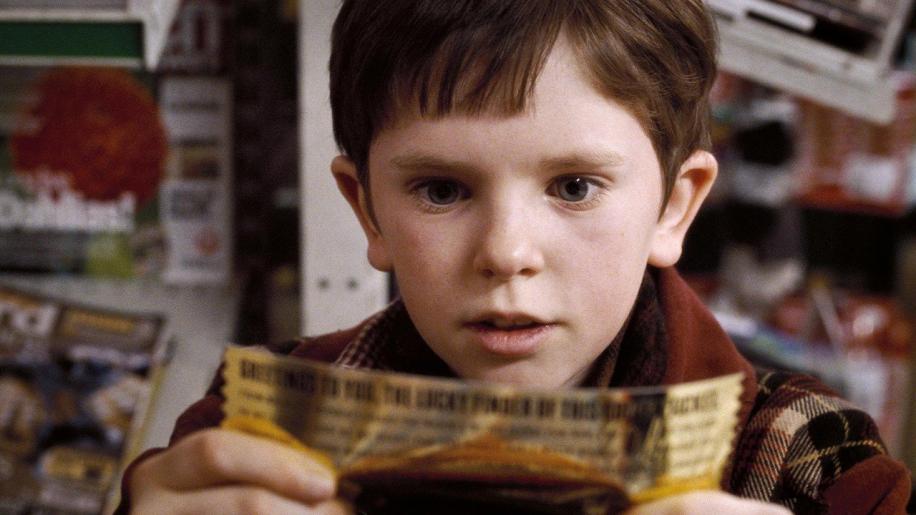 Charlie and the Chocolate Factory Movie (2005)

Who hasn't read or heard the story of Charlie, Wonka and a chocolate factory? I'm sure if you've never been near the book, you've at least seen the movie with Gene Wilder as Willy Wonka. It certainly was part of my childhood and even now, if I catch the movie on TV, I tend to watch the whole thing, orange Oompa-Loompas and all!The story, for those 2 people who are oblivious, is about an amazing chocolatier named Willy Wonka (Depp), who has a rather large factory but is reclusive after his secret recipes were stolen and sold to rival companies. He therefore fired the staff and closed the factory, until one day it started up again, however no-one ever goes in or out through its gates. One day, Wonka decides to place 5 golden tickets into chocolate bars and for the five lucky people who find a ticket, they and a family member are able to spend a day with Wonka in his factory as well as having all the chocolate they will ever eat in their lives. For one of the 5, there is the promise of a special prize, which is unknown to the winners, suffice to say the lure is attractive and the world goes Wonka chocolate mad in the scramble for the tickets. Charlie Bucket (Highmore) lives with his family in a very tiny, rundown house and are clearly poor. Poorer than Kenny from South Park in fact. So poor, that Charlie receives a Wonka bar of chocolate for his birthday and that's the only one he gets every year, so with his birthday approaching, he will receive his annual bar - but alas, no golden ticket. Even after his Grandpa Joe (Kelly) buys another one for him, he fails in his quest for a golden ticket. However, one fateful day, Charlie finds a $10 note and buys another bar and he finally finds the fifth and final ticket, which will enable him to enter the factory, meet Wonka and bear witness to some fantastical sights, but with competition in the shape of the other 4 ticket finders as well as a variety of temptations, will Charlie get the special prize?

The obvious question is how could this movie fail, with Burton and his particularly stylistic and unusual approach and Dahl's comic yet dark material, but it does, sort of. I think the easiest way to word this is that it is Burton-lite, which still isn't a bad thing, but it never quite reaches the expectations we have. For example, everything is present and correct, from the bleak look of the town to the vivid sets inside the factory, Danny Elfman supplying the soundtrack and the slightly sinister undertones, but it doesn't quite hit the notes I expected - particularly the darkness to the movie. Some people may even argue that the songs aren't a wise move, but they were in the original movie (and the book if I recall correctly), so it's only natural that they appear in this version and they aren't that bad - they're quite good fun, well, for the movie - I wouldn't want to listen to them in the car or on an iPod. So, that's my criticism of this as such, but there're many positives. Casting wise, I don't think it could be any better, with Highmore looking suitably mousey and sympathetic, the other children being equally obnoxious from the rather large Augustus Gloop to the spoilt Veruca Salt, they are certainly fit the bill. David Kelly, who plays Grandpa Joe is inspired casting for a Hollywood movie and after seeing this, I'd be hard pressed to think of anyone better than this. Then, we have Wonka himself, Johnny Depp, whom certainly has come a long way from 21 Jump Street and A Nightmare on Elm Street. Much has been said about the inspiration for his portrayal, indeed the extras point out that at length that he is supposed to be akin to a local TV children's presenter. No, I have to agree that he's channelling the likeness of Michael Jackson and if you need further proof, the opening line to the 5 lucky winners of “Good morning Starshine. The Earth says Hello” certainly made me think of only one person with the suffix of “Whacko” as a nickname. Not sure about the haircut, but other than that he portrays Wonka as part-childlike, part-adult and very mischievous in his machinations.

Although I mention that Burton's vision isn't quite up to his earlier work (I think Beetlejuice is still the yardstick for him), there are some inspired moments, from Wonka's father, played by Christopher Lee who just has such a presence when he is on screen, the glass elevator itself and its travelling and my personal favourite, of young Willy where he is wearing braces - clearly influenced by Marilyn Manson's “The Beautiful People” video, but very visually impressive when a child is wearing the device. There's also a wonderful 2001 homage in the sending of the chocolate bar via TV, which is a nice reference if ever there were (and I'm not just talking about the music!). As I mentioned in my review of Alias season 4, the same holds true here - even average Burton is still better than a lot of Hollywood's output, it's just a shame that with the source material and possibly the best person at the helm, it didn't hit all the right notes, but the ones it does hit, it does so magnificently.