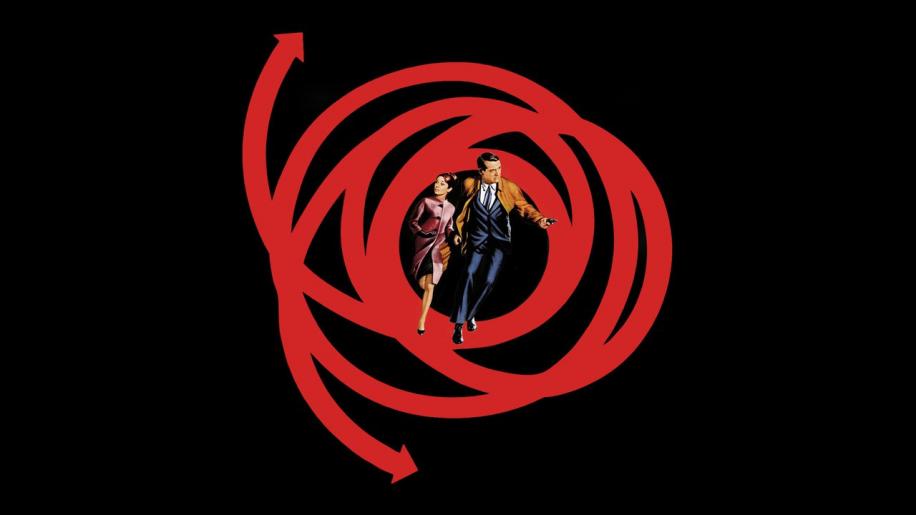 The romantic thriller, a one time popular genre albeit one that hasn't been attempted much in modern cinema, but quite popular during the fifties and sixties with Charade being a above average example of such films.

It is a dark night, a train speeds by. There is a scream, and a man falls dead from the train. Thus begins Charade with some wonderful trippy opening credits. Mrs (Reggie) Lambert (Audrey Hepburn) is contemplating her return to Paris; she has been skiing with her friend Sylvie (Dominique Minot), and confides in her that she is going to divorce her husband. It is here that she first meets Cary Grant's character (his character goes through so many name changes I'm not going to use any!) and they immediately strike up a rapport. Upon her return to her home, Reggie finds it completely empty; furthermore she is summoned before the American embassy and Mr Bartholomew (Walter Matthau). He informs her of the deadly peril she is in, her husband has been murdered (at the beginning of the film) apparently by four men, all of whom are after a quarter of a million dollars that Mr Lambert has about his person. These men are now under the assumption that she has it; though she has no idea. Calling on Grant for help, the run time of the film is then filled with Hitchcockian twists and turns, murders, mystery and intrigue as all try to find the missing loot.

Charade is highly regarded amongst critics and fans alike, and I can see why. The film oozes style, the acting is top notch, the story has enough twists to keep the interest and the score by Mancini is a joy. However, I'm afraid to say it didn't do much for me. Let's look at the pros and cons; the film is technically superb, with a well crafted story, believable and likeable characters. The on screen chemistry between Grant and Hepburn is one of the highlights of the picture, their dialogue and situations are the main emphasis for the light comedy and romance. Even when you are kept guessing about the true nature of Grants involvement such is his charm that he remains pleasant, easy to see why Reggie would confide in him. The 'evil' characters too still retain an element of charm, with the possible exception of James Coburn, whose Tex maintains menace throughout. As good as the plot is, for me this is its downfall, in 1963 everyone was kept guessing and the final twist was a shock, but to a modern audience brought up on a diet of Alias and 24, I, (and I'm sure others) spotted the villain in an instant, somewhat killing the suspense. Yet I do not dislike the film, and do not score it as such, rather it played to me as a daytime TV afternoon film, eminently watch-able but not bothered to miss it. But according to the IMDB I am clearly in the minority.