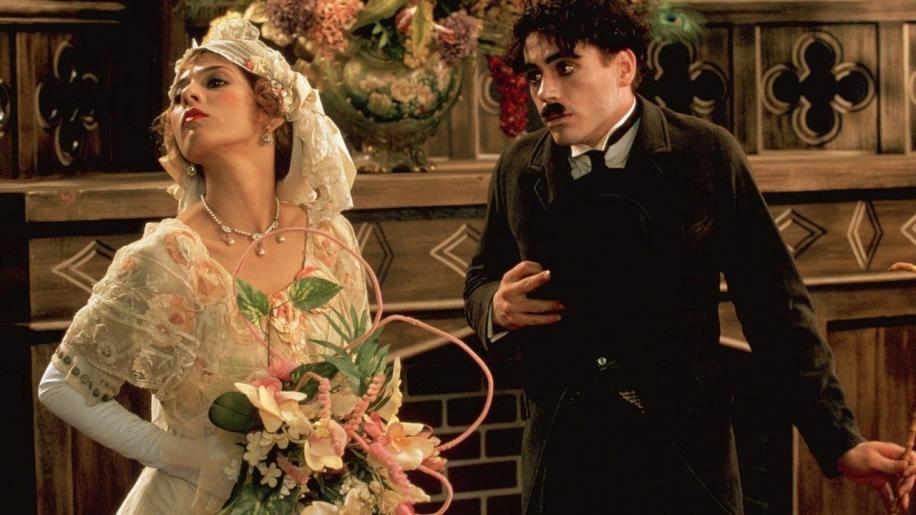 As people rush by the former Cinema (now a Bingo Hall) in Aldershot High Street, their minds focussed on their daily tasks, not many - if any - take the time to stop and read the small plaque on the wall. If they did, they’d learn that it’s where the legendary Charlie Chaplin first performed live on the stage back in 1894. This same momentous occasion features in the opening sequence of ‘Chaplin’, directed by Richard Attenborough (now Lord Attenborough), released in 1992 and recently available on American Region free Blu-ray in a 15th Anniversary Edition. Now, arithmetic was never my strong point, but if I take my shoes and socks off even I can work out that adding 15 years on to 1992 doesn’t come to 2011. So someone must be worse at doing sums than me. Phew, that’s a relief!

But back to the movie. It was the film that really launched the career of Robert Downey Jr and, in the bonus material on the disc, Lord Attenborough recalls the search for an actor to portray Chaplin and the day that a ‘total madman’ walked into his office. Later on, that same madman (Downey Jr) walked out the door with the lead role in the movie. This led to him watching almost every Chaplin film ever made as research so that he could learn every mannerism, every nuance and capture the way he moved. Downey Jr’s performance in the movie is a superb photocopy of Charlie Chaplin but it’s not only in the stage and screen persona that it excels. In some of the quieter moments, we see Charlie alone with his thoughts and it’s here that Downey Jr breathes ‘human-ness’ into the part and makes us care for Charlie, the man. It was this performance that gained Robert Downey Jr a Best Actor BAFTA and nominations for an Oscar as well as a Golden Globe.

Director Richard Attenborough doesn’t try to be too gimmicky in his approach to telling the tale of Chaplin’s impoverished upbringing in London, his extraordinary success as an actor and director, his troubled marriages, scandalous affairs, shocking exile to Switzerland and his triumphant return to Hollywood. The film sticks close to the known facts, but Attenborough had a problem in how to link the various sequences of the film together. The only fictitious character in the movie is Hayden, played by Anthony Hopkins, a ghost-writer whose conversations with the old Charlie as they work on his biography are used as a vehicle for the story – allowing it to be told in flashback and sometimes out of chronological order.

The huge star studded cast includes Kevin Kline (as Douglas Fairbanks), Dan Aykroyd (as Mack Sennett), John Thaw (as Fred Karno), Milla Jovovich, Diane Lane and Geraldine Chaplin (playing her own grandmother). In the early part of the film, Lord Attenborough has great fun copying the style of scene transitions used in the silent era, including wipes and iris effects which look rather odd to the modern CGI accepting audience – but they do stir memories of a bygone era as seen through the camera lens.The tone of the film is somewhat reverential towards Chaplin – as well it should be for he was probably the world’s first Megastar, although they didn’t have such a word to describe him back then. If the film had done a hatchet job on Chaplin, it would have been rejected by the audience as you can’t do that to someone for whom the world has a longstanding great affection. This being the case, Chaplin’s affairs with young women aren’t so much swept under the carpet as kept in the background and the audience is asked to accept his behaviour simply because he’s “the most famous man in the world.” The film doesn’t go so deeply as to probe the roots of his attitudes or behaviour – or to psycho analyse him at all. There’s just so much to cram into the film, even with its two and a quarter hour running time. One of the biggest changes in film distribution history came when Chaplin, Fairbanks and Mary Pickford set up United Artists in order to take control of their own films and the revenue from them rather than give them to a studio owned by someone else. This is pretty much glossed over – perhaps because it was felt that an audience wouldn’t be so interested in the business aspect of the movie business.

‘Chaplin’ succeeds in transporting us back to the turn of the century with some great period set design and costumes. The look of the old Victorian Music Hall, the cobbled streets, the gasometers and the grime bring home the intended feeling of authenticity that plays as a backdrop to Charlie’s early years. To be around when moviemaking was ‘all new’ would have been fantastic, but the closest we can come is when a film like ‘Chaplin’ becomes our own time machine to this magical age. As Charlie turns up in the middle of a scene being shot by the great Mack Sennett, it’s presented very much as actuality but those of us with a love of film feel that we’re getting the chance to be a fly on the wall.

I’d almost forgotten that the late John Barry had composed the music for ‘Chaplin’ but it’s not the John Barry of the wide sweeping vistas, soaring strings and rising horn section that we get here. It’s the much gentler, laid back flute, piano and strings approach which is also quite low level in the sound mix. Nonetheless, the unmistakeable characteristic style is there and it’s a pleasure to hear it again. Although the music isn’t such a strident voice in the movie, it did still receive an Oscar nomination.

The pacing of ‘Chaplin’ is leisurely as director Attenborough takes his time to tell the story well, although I do feel that it’s a film for the right kind of audience. I doubt very much if it will appeal to the same audience as ‘Fast and Furious’ for example. Those who will get most from it will be long time fans of ‘The Little Tramp’ who want to know more about him without too much of a documentary approach. The fact is that Robert Downey Jr simply does become Chaplin, so much so that you forget you’re watching an actor. One of the best accolades afforded to an actor is when an audience doesn’t think they’re watching good acting. They just take it for granted. For 135 minutes, ‘Chaplin’ lives again.