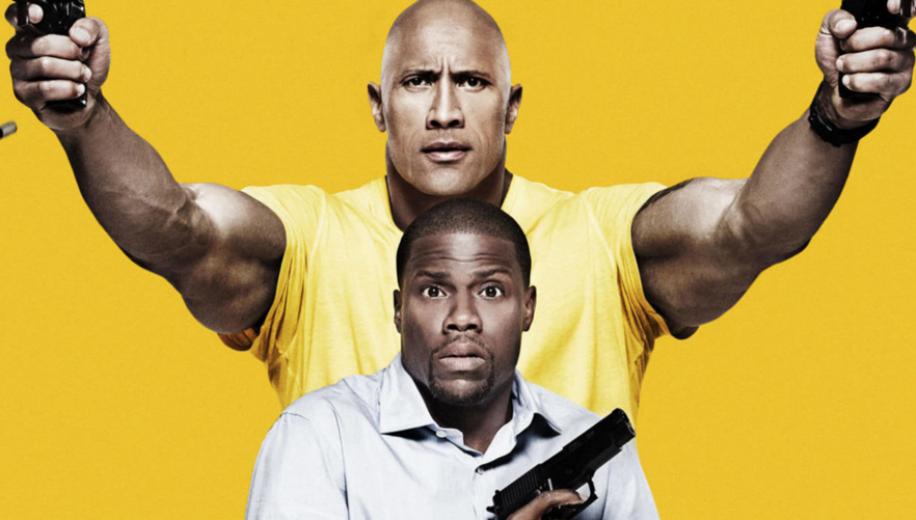 Central Intelligence is an enjoyable action comedy that benefits from the undeniable charisma of The Rock.

The film centres on Calvin Joyner (Kevin Hart) who's life hasn't quite gone as he'd hoped. At high school he was voted the student most likely to succeed but he now works as a forensic accountan and feels he has failed to live up to his potential. Despite being married to his childhood sweetheart, Calvin feels unfulfilled and his approaching high school reunion isn't helping with his sense of failure. However all this is about to change when Robbie Wheirdict, an unpopular kid from school that Calvin was nice to, re-enters his life. Wheirdict has reinvented himself as Bob Stone (Dwayne Johnson) but despite now being a CIA agent he is still the same misfit he was back in high school.
The majority of the film centres on Calvin and Bob's attempts to uncover a mysterious villain whilst avoiding the CIA but along with all the jokes and explosions there is a story that has a good heart (no pun intended) and a strong message about standing up to bullies. What's surprising is how likeable Kevin Hart is, as he plays straight man to The Rock's genuinely funny turn as goofy Robbie, who can kick ass but also likes unicorns. Central Intelligence is predictable but remains enjoyable, with enough comedy, action and fun cameos to propel the narrative forward. However it's the chemistry between the two stars that really keeps you engaged and will entertain you until the very end. Central Intelligence was filmed digitally using the Arri Alexa XT at a resolution of 2.8K and was finished using a 2K Digital Intermediate (DI). This 2K DI presumably formed the basis for the Ultra HD Blu-ray release and was then upscaled by Warner Bros. to 4K. The film is presented using a 3840 x 2160p transfer in the film's correct 2.40:1 aspect ratio, the disc uses 10-bit video depth, a Wider Colour Gamut (WCG) and High Dynamic Range (HDR), and is encoded using the HEVC (H.265) codec. We reviewed the region free US Ultra HD Blu-ray release of Central Intelligence on an LG 55B6 Ultra HD 4K TV with a Samsung UBD-K8500 Ultra HD Blu-ray player, because the film has yet to be released on the format in the UK.

Although it could be said that any film can benefit from things like WCG and HDR, the reality is that some films are better than others. Whether that's a result of the production or the grading is debatable, it's probably a combination of the two, but there's no doubt that whilst some Ultra HD Blu-rays are clearly superior to their Full HD counterparts, others seem like less of an upgrade. Central Intelligence falls into the second category and whilst there are slight improvements if you go looking for them, the Ultra HD and Full HD Blu-rays do appear very similar.

Since the film was finished using a 2K DI, there isn't any real increase in resolution but that's to be expected and in direct comparisons the amount of detail in both discs is essentially identical with plenty of fine definition present. Where Ultra HD Blu-ray should improve over the Full HD version is in terms of its wider colour gamut and higher dynamic range but this is certainly less obvious with Central Intelligence. There is definitely greater brightness and detail in some of the specular highlights and on occasion more detail in darker scenes but in direct comparisons the improvements are minimal.

The same is true of the colour gamut, with the colours largely appearing to be the same between both discs, although on occasion there is greater saturation with the Ultra HD Blu-ray. The digital source is clean, the encoding is well done and the image is free of banding or other unwanted artefacts but ultimately the benefit gained from buying the Ultra HD Blu-ray over the Full HD Blu-ray is minimal and doesn't really justify the additional cost. The Full HD Blu-ray of Central Intelligence is excellent, so unless you really need to own every new Ultra HD disc, you may as well go for the regular Blu-ray instead. Central Intelligence was released theatrically with Dolby 5.1 and 7.1 soundtracks but there was no immersive audio mix and Warner Bros. have chosen not to create one for the domestic release. Although some studios are creating Dolby Atmos or DTS:X mixes for Ultra HD Blu-ray, Warners approach is to use the theatrical mix and as a result Central Intelligence has the same lossless DTS-HD Master Audio 5.1-channel soundtrack found on the regular Blu-ray


The soundtrack is the same enjoyable DTS-HD Master Audio 5.1-channel mix used for the Blu-ray

Despite not having an immersive audio mix, the soundtrack of Central Intelligence is generally excellent with aggressive use of the surrounds and a very active sound field. The audio designers use the surround channels to enhance all the scenes, so in offices, bars or on the street the subtle use of effects help but create a sense of environment. Once the actions scenes kick off, the sound design moves up a gear and there is excellent directionality and steering of effects. The dialogue is clear and centred to the screen, whilst the largely forgettable score is spread across the front array. For an action film the low frequency effects seem rather subdued at times, with explosions sometimes lacking the bass impact that we expect these days but there is a nice percussive kick to the gunfire and overall this is a great soundtrack.

The domestic release of Central Intelligence uses seamless branching to include the theatrical version of the film and a longer unrated cut that basically includes more dirty jokes and swearing. The Ultra HD and Full HD Blu-rays both included the theatrical and unrated versions of the film but all the other extras are on the regular region free Blu-ray.

Audio Commentary (HD, 1:47:37) – This commentary with director Rawson Marshall Thurber and editor Mike Sale only accompanies the rated version of the film and is a rather dry but informative feature with some interesting production anecdotes.

Line-O-Rama – As the name suggests this is a collection of scenes where the actors ad-lib extra lines and there are two versions, a rated one (HD, 02:27) and an unrated one (HD, 02:31) with literally a few seconds of more risqué comments.

Dance Off (HD, 02:26) – An amusing dance off between The Rock and Sione Kelepi who was the body double for the younger Robbie in the film.

Couch Time Lapse (HD, 00:41) – This short extra demonstrates how a particular gag in the film was achieved practically. Central Intelligence is something of a surprise, not only is it a decent Kevin Hart film but it's also an entertaining action comedy that combines laughs and thrills with genuine emotion and a positive message. There is excellent chemistry between the two leads and the biggest surprise is Dwayne Johnson who delivers a genuinely funny performance that relegates Hart to the role of straight. We all know The Rock can do action in his sleep and has charisma to spare but who knew he could be so funny as well. The film is available in both rated and unrated versions and we preferred the latter, which had more laughs courtesy of some extra swearing and the odd risqué comment.

Whilst Central Intelligence is definitely worth seeing, the Ultra HD Blu-ray is a bit of a disappointment, offering an image that isn't much of an upgrade over the regular disc. There is no more detail despite the higher resolution disc format and although the Ultra HD Blu-ray has a wider colour gamut and higher dynamic range, the results aren't much of an improvement on the Full HD Blu-ray, in fact you'll have to go looking for the differences in order to find them. Both discs have the same DTS-HD Master Audio 5.1 soundtrack and they both include the two versions of the film but all the other extras are on the regular Blu-ray. So if you're a fan of The Rock you'll definitely want to pick up Central Intelligence but you might want to buy the Full HD Blu-ray instead and save yourself a few quid.