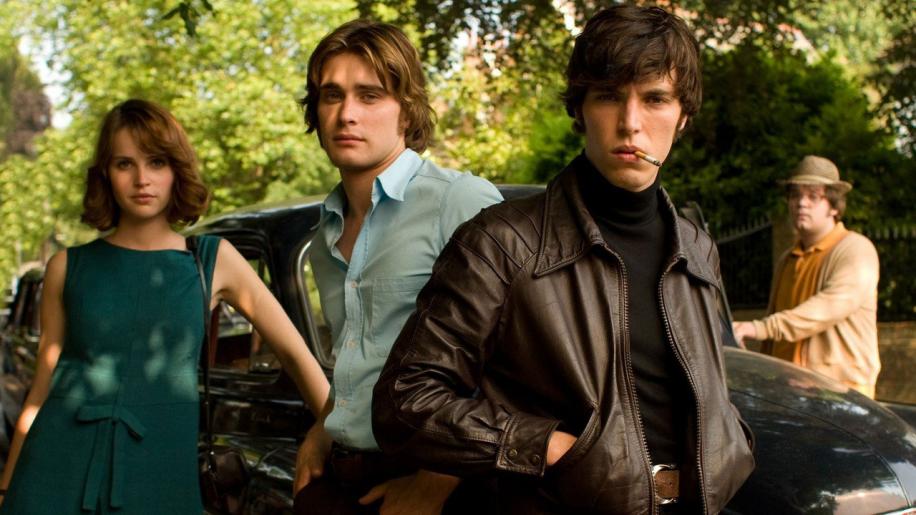 The UK BBC TV show, The Office, was truly seminal – a fantastic bit of biting modern comedy, set in a quintessentially British locale – Slough, Berkshire. Despite being so great, good enough to warrant a fairly addictive (and hilarious, in a very different way) US remake series – which has gone on for 7 seasons so far and stars Steve Carrell in the lead role – the UK show has not really worked out as well for its lead star, Ricky Gervais. Unfortunately, despite his stand-up antics, his dabbling in various Hollywood rom-com fare and his occasional attempt to play a different role to his usual (he even had supposedly serious parts in both Alias and 24, although his scenes were sensibly deleted from the latter), he has remained firmly pigeon-holed in the part of put-upon sarcastic man. Sure, he’s laugh out loud funny, but little else, and I think this is largely due to his intentionally painful turn as David Brent.

Now Gervais was born and bred in another little town in Berkshire, Reading, which happens to be my hometown too, so I was particularly chuffed when he announced the title of his latest film ‘The man from the Pru’ because I knew all about taking your first job at the biggest office in town – The Prudential – before (hopefully) going on to bigger and better things. I may not have gone there myself, but there were only two major office recruitment drives for those who are at, or who have just left, university – and they were both pretty much identical in what they offered: a lot of paper-pushing and an early look at office life. The fact that the setting was the 70s didn’t put me off either – surely things hadn’t changed that much in 20 years? When it came to release, however, it looked like Reading was going to be pretty incidental to the narrative, really. The trailer boasted locations that never existed, even forty years ago, and the pitch was definitely of the romantic-coming-of-age-drama variety. It’s title was also changed – because apparently The Prudential didn’t particularly like the way in which their firm was portrayed here. Instead, they named it after a part of Reading, which amounts to little more than a set of crossroads, a couple of pubs and some Indian shops. Oh, and a cemetery.

Freddie, Bruce and Snork have always been friends, all coming from a working-class background. Bruce is the coolest of the trio, but also – as is always the case with the ‘coolest’ character – the most dangerous, always getting them into fights and/or trouble with the law. Snork is the slightly chubby bespectacled oddball of the group: his nickname saying it all, although it’s obvious that he has a heart. And Freddie. Well, Freddie’s the dreamer. Whilst the other two are happy staying at their class level, following in their father’s footsteps, working in the steel mill or in the railway station, respectively, Freddie dreams of bigger, better things. And when given the opportunity to go and work for a large insurance company, he finally thinks he can jettison his limited heritage and become a suit-wearing rich-kid. With class. Unfortunately, complications occur as Freddie finds that his childhood sweetheart, who is also the son of his boss, is also betrothed to one of the leading salesmen in the company. And when Freddie’s two best friends start to become more of an embarrassment to him, he has to reassess his whole life – does he want to be a suit-wearing door-to-door insurance salesman with no heart but a lot of cash, or does he want to work hard at a menial job, and be true to himself and his genuine friends?

Cemetery Junction is a well-meaning, feel-good coming-of-age drama which, rather than focussing on adolescents, looks at a group of wayward twenty-somethings who need some direction to their lives (although one might argue that, forty years ago, this was the equivalent age range). At once giving you a keen insight into what life might have been like growing up in a small but growing town back in the 70s, the film also allows modern generations to reflect upon their own drive – and lack thereof, and their own relationships with their parents. Parents (and older people) were generally afforded a greater amount of respect, but that also meant that many people were more restricted. Tempered behaviour is not necessarily a bad thing, but it would be years (some would argue it still has not happened) before more of a happy medium was struck. So rock music, freedom of expression, and generally unruly behaviour were still heavily frowned upon, particularly by the more upper class members of society. And, conversely, the Police were shown much less overt respect (even if, these days, it might just be a facade).

Following these three particular youths we see what life must have been like living up to the expectations – and perhaps the paths laid out by the careers – of your own parents, coping with the youthful urge to generally wreak havoc and break rules, and the desires to break free and strike your own claim on the planet. By showing them as close friends, we also get to reflect upon all of those times when we have grown away from childhood companions – for one reason or another – and the way in which such relationships often have to mature in order to last the duration.

Ricky Gervais may be fairly pigeon-holed in his career as a comedian, but his writing and directorial work here (again paired with his lifelong production companion Stephen Merchant) is really quite decent, an ostensibly simple story, which is richly infused with all of the little details that smack of personal experience, and brought to life using lovingly rendered cinematography. It was also a good move for him to step back and take a small supporting acting role within the movie itself, as – in a film that is much more drama and romance than it is comedy – too much classic Gervais could have offset the balance of the entire affair.

As is, the film is basically carried by three lead performances by some relatively fresh Brit talent. Christian Cooke does well as Freddie, the guy who doesn’t want to follow in his father’s limited footsteps, and sees greater things in his life – even if he does not know what they are or how to get them. He’s marginally insipid for much of the narrative, but that’s his character: trying to break free from one domain only to get restrained by the limitations of another. Tom Hughes (who was in the Brit TV series Trinity alongside Christian Cooke) is the cool Bruce, who doesn’t really know where to draw the line and seems to think he can be that eternal rebel without a cause. And Jack Doolan brings out the best from Snork, a very genuine character, who just seems to be a little rough around the edge.

Of course, aside from Gervais himself, on terrific form playing Freddie’s dad (who is endlessly, and hilariously, oppressed by his mother-in-law), we also get a bunch of familiar faces in supporting roles. Ralph Fiennes is getting good at playing slimy as he ages, and here he oozes pretentious emotion-less decorum as the head of ‘the Pru’ – Freddie’s new boss, and also the father of his childhood sweetheart. Emily Watson (Punch Drunk Love) brings some humanity to the role of the repressed wife, who wants better for her daughter, and Matthew Goode (A Single Man) plays the stuck-up future husband, who is the epitome of the father. Felicity Jones is the girl in question, and for such a pivotal part, she really does not get much breathing room – nor does she bring a great deal to the proceedings. Still, overall it’s a minor blemish in a superbly chosen cast that breathe life into such a richly character-driven tale.

For those who have some perspective of the setting on offer here, I suspect you will find it an authentic, nostalgic representation of the 70s, complete with correct attire – to reflect the fashion across all walks of life; classic cars and suitably old-styled buildings. Did Reading actually ever look like this? No, not as far as I know. Was there ever actually a Cemetery Junction railway station? No. But, unless you’re familiar with the ever burgeoning, just-outside-London town, you won’t really notice any of these things. That said, to be fair, they could have just used any town for the story here: the fact that it is Reading is more incidental – just a tribute to Gervais’s own Reading history. However, for born and bred Reading-boys, the nods are still a pleasant surprise, even if the setting is off – with a few familiar names bandied around (the Pru, Kendrick – also the name of one of Reading’s main schools, and some of the street names).

Cemetery Junction is a nice little drama which cleverly juxtaposes modern and traditional values, infusing a richly-painted narrative with some solid characters who are all going through very typical – and normal – periods in their lives. It offers up some nice reflection, as well as an engaging story, which drives us through the events in these lives as if they were our own experiences. It’s not some lofty, heavyweight Oscar affair, nor is it as frivolous and throwaway as many of its ilk can be (on both sides of the dramatic spectrum – romantic and comedy). It may not be a classic, or even a must-see, but it is nevertheless an entertaining piece of Brit drama, a Saturday afternoon kind-of flick that offers something for several generations.