Catch Me If You Can Blu-ray Review 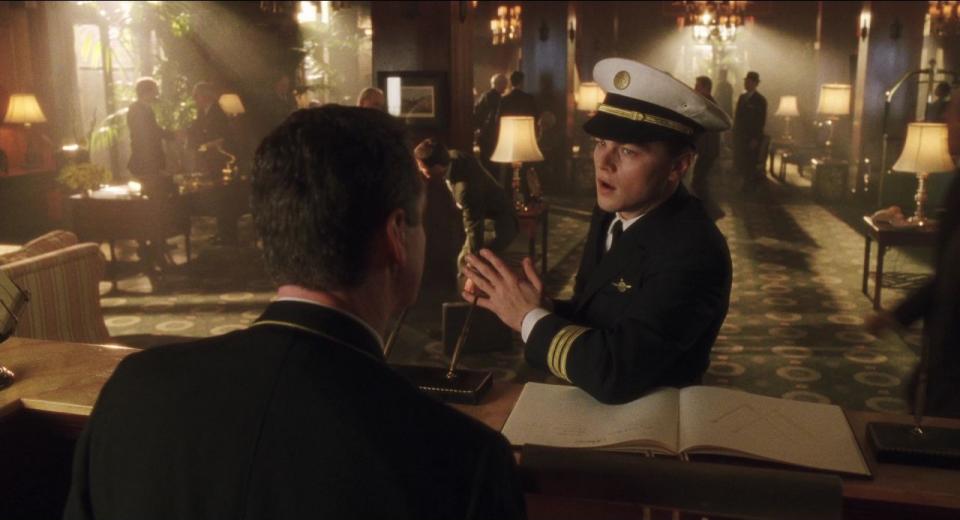 Shot in 2002, this movie was filmed in 1.85:1 on 35mm stock and the AVC-MPEG transfer looks very good for it. The retro nature of the film is replicated in the colourising, with a slightly muted, blue-grey palette and squashed black levels. The dynamic range is a little lacking, with some shadow detail feeling a little lost, but it is easy on the eye and nothing leaps out as particularly wrong. Edge enhancement has been applied during the mastering and has left some of the characters looking a little too stand out against the background, with a visible hard line around them. This is a pity as the softer focus found elsewhere in the frame looks really nice. There are a few digital effects that are showing their age, with the take-off scene with Di-Caprio in the cockpit looking very dated and somewhat false. Film instability and dust and scratch marks are negligible throughout. A good transfer from a high quality negative is only slightly marred by a degree of over processing. The DTS-HD MA 5.1 stream is, like the rest of the movie, gentle, polite and unobtrusive. Vocals are clear but very much confined to the centre channel, while the surround sound is quite under-utilised and the LFE remains dormant for 99% of the movie, waking up for a few crashes of thunder and the occasional jet taking off.

John William’s score is not one of his most memorable, but is still very pleasant, melding jazz and orchestral into something perilously close to easy listening. More music of the period might have been good here, but the main score fits very well all the same. To be fair, there are excerpts from a few top 40 hits, but a few more might have helped to set the scene. At first, the extras seem quite comprehensive, but a bit of digging and you realise that actually what you get is a couple of featurettes split into individual clips. The good news here is that the content and editing is good, with plenty of background information about both the movie and the real Frank Abagnale. All are in SD, having been lifted from the DVD, but even so, still look very soft and low resolution.

Behind the camera is a fairly standard making of documentary with plenty of input from Spielberg, Di-Caprio and quite a few of the other cast members and crew. Spielberg’s preferred method of directing is highlighted, along with the behind the scenes activity to dress the large number of locations and sets. This leads neatly into:

Casting of the movie. There is no getting away from the fact that this is all part of the same short, and is further split down into individual interviews with the cast, interspersed with location footage and clips of the movie. There is the usual amount of sycophantic back slapping, but also a degree of genuine respect between the cast, although nothing new is revealed.

Scoring: John Williams has a long relationship with Spielberg and this movie gave him the opportunity to write a jazz score, something he had not explored up until now. This short discusses the music choices – including the few contemporary tracks that made it in and discusses how the music fits to the style and pace of the movie.

FBI Perspective follows the production of the FBI scenes, along with the hired ex-FBI investigators, some of whom worked on similar cases during the ‘70s and could relate to the characters and settings within the movie.

Closing is the wrap up, bringing the production shorts together. Taken as a whole, this is an interesting and varied documentary with the menus more of a hindrance than a help to viewing it.

The only extra that does not really fit into the above category is the short that details the real Frank Abagnale. Although made in the same consistent style as the others and featuring plenty of footage from the movie, it is much more about the back story of the man himself and less about the fictional character.

We must not forget the stills library, but there is not a lot of interest here, as most of the shots are covered or used in the other documentaries.

Language support is limited to English, French, Spanish and Portuguese, both in terms of soundtrack and subtitles. The disc loads quickly and directly to the main menu and there are no trailers to plough through. This gentle yet compelling thriller is easy viewing, but does feel hurried towards the end. There are fine performances from the cast and the score matches the pace of the movie perfectly. You may not have heard of Frank Abagnale, but his criminal activities in the early 70s made him something of a criminal notary at the time. This film hits the balance between telling the all but unbelievable true story and not sensationalising criminal activity.

Technically, the transfer is good, with a few niggles over edge enhancement and a little lack of detail in some of the darker shots. The sound is fine, given the nature of the movie, but is not dynamic or expansive in terms of surround or low frequency information.

This is a good film to get immersed in, but is not a classic, nor a good test piece for your home cinema. It may not be Spielberg’s finest hour but the light hearted feel and slick direction make for enjoyable viewing.