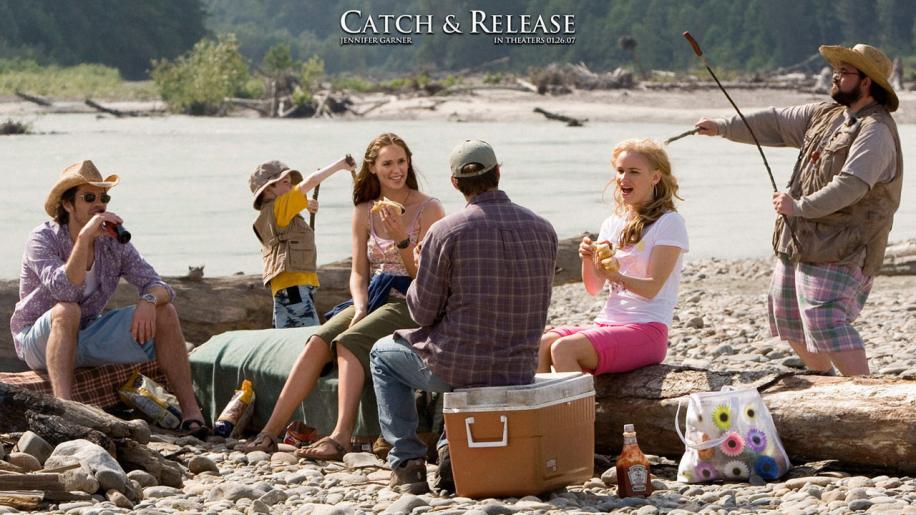 I can't lie and say that it isn't a relief to be covering something light like a rom-com once in a while. Although the genre certainly isn't my preferred tipple - far from it, in fact - it is definitely one of the easiest to write about. Of all the standard film-formulas that Hollywood enjoys packaging its products in, the rom-com, or chick-flick, just has to be the least demanding to manufacture and, as a direct result, dissect. The target audience is primed from the get-go and knows exactly what the outcome will be even before the principals have uttered their first lines. Thus, the margin for originality is narrower than a BNP member's airtime on Big Brother.

However, in recent years there has been a concerted attempt by screenwriters to concoct newer, fresher and altogether stranger variations on the form. From the rat-race, situation contrivances of Bridget Jones and Love Actually to the surrealism of Stranger Than Fiction and Eternal Sunshine Of The Spotless Mind, the triumph of love over adversity has been bent around so many different obstacles and conundrums that the genre feels like some enormously stretched elastic band. But, with that in mind, elasticity can only go so far before pinging right back in on itself. With Catch And Release, director/writer Susannah Grant also tries to break the mould, creating an initial scenario that is, shall we say, somewhat graver than usual. Jennifer Garner, tackling a different role than has been customary of late, plays Grey Wheeler (sounds like the name for a mobility-scooter, doesn't it?), a young woman who, in the struggle to come to terms with the sudden loss of fiancé Grady, ensconces herself in the fold of a trio of his closest friends, who are determined, in their own bumbling, squabbling fashion to care for her throughout this troubling time. Although we never see Grady, himself, not even in flashback, he looms large over the course of events that Grey finds herself in, even down to some to totally unforeseen - at least by her - revelations that will conspire to rock her worldview and her memories of him quite radically.

The trio of friends - fishing-trip buddies Dennis (Sam Jaeger), Sam (Kevin Smith) and Fritz (Timothy Olyphant) - are going to provide the shoulder for Grey to cry on, the camaraderie that she needs and, of course, the deep-seated love interest that will become the next thing to loom large in her life. The situation inevitably muddies still further when Maureen (Juliette Lewis in a terrible blonde wig) turns up with her young son in tow looking for Grady and his regular financial support. Oh dear, oh dear. It seems that the love of Grey's life had a secret or two and that perhaps the one person she now finds herself drawn to may have all the answers. Whilst nothing is particularly original, apart from the initial plot introduction, that is, Grant's strict determination to keep matters fizzing with an effervescent and character-based script is largely successful. Ultimately bland in my opinion, but still successful in terms of genre expectation. What we have here is another case of mismatched lovers, thrown together amidst a situation that they cannot control, yet having to make the necessary steps, no matter how uncomfortable they may be, in order to find happiness. Grant, who penned In Her Shoes and Ever After, here takes some assured steps into directing but reveals no interest at all in rocking the established tradition of the chick-flick. Rather, she celebrates the innate “inevitability” of it all - not unlike an Agent Smith struck by Cupid's Arrow ... in bullet-time, naturally. The characters aren't anything new and the concept of bouncing from one interested party to another whilst all along being obviously drawn to one particular individual - the one that, on face value, is a wrong 'un - is as old as the hills. Yet, as samey-same as this all feels, Grant gets by on warm atmosphere and a vibe that cannot help but be likeable.

There are a fair few clunky lines punctuating the otherwise reasonably well thought-out script. But the film does have a soft, cosy feel that quickly nudges tragedy out of the way each time it rears its ugly head. An early sequence, taking place appropriately enough at the wake after Grady's funeral, sees immense sorrow glibly turned on its head by some impromptu comedy sex. So it is that pain gets conveniently fuzzed over, and angst diluted. Confrontations and revelations have no sharp edges to them, swapping vigour and intensity for either slapstick or verbal smarts to win the day, so it is hard to imagine anyone getting too swept away by the histrionics on offer. Awkward moments - and there are quite a few of them, in flavours stretching from the unfortunately eavesdropped conversation to the sudden-shock “face-to-face meeting with someone you never, ever wanted to see” varieties - are never as suffused with the pregnant-pause, wide-eyed frustration that this type of deal usually supplies, keeping the tone on an perpetually even-keel throughout. And although there is a bit of soul searching going on in here, it is always kept on a tight leash. The uniqueness of the original hook is, like the title of the film implies, eventually released as the plot dovetails neatly back into the same, well-worn path that almost all movie romances tend to follow. Ergo, there is never any doubt at all that Grey and Fritz will find themselves irrevocably smitten.

Regarding the cast, Garner can certainly deliver the goods, becoming at once, fatally flawed and admirably resilient as a woman caught between two worlds - the first one that she had painstakingly worked towards and dreamed about, and the next, one that provides a trapdoor beneath her feet that will lead, inevitably, to a life and a love that is dangerous and unpredictable. She may never really spread her wings as Grey, but Garner is still convincing enough in the role to keep the attention. Although, is it just me or does she have truly hideous lips? Timothy Olyphant manages to weave Fritz over and under the fine line between jerk and hero with charismatic ease. Again, this is hardly a demanding role to undertake, but he still manipulates the audience to good effect, although we can never be under any illusion that he will not eventually become the best catch for Grey in what appears to be an overstuffed river. There is a surly arrogance about him that seems, at first, to be pure cliché-set-dressing, but Olyphant is talented enough to skirt and duck around the sometimes quite naff dialogue he is forced to deliver and the somewhat cardboard characterisation that wants to present him as a misunderstood cad with a heart. And if Sam Jaeger's Dennis is predictably the boring safe one, there is nevertheless a deep longing that he projects through his puppy-dog eyes and a dependable best-friend status that makes him possibly the easiest of the trio to root for. As Sam, Kevin Smith is admirably restrained and watered-down, but it is reassuring to discover that he is still allowed to verbally meander from time to time. Fulfilling the typical fat-boy, no-hoper staple requirement smacks of the trite and the conventional, but Smith just oozes affability and turns Sam into such a reliably goofy member of the team that the film would simply fall apart at the seams without him. And the delectably kooky Juliette Lewis ditzes into and out of the plot with enough screwball charm to perk the interest whenever she is onscreen. Again, the role is culled from the stock library of antagonists, but in Grant's hands we instinctively know right from the outset that there can be no serious threat there and, thus, even Maureen becomes just another member of the team.

The film is also a terrific tourist commercial for Boulder, Colorado. John Lindley's cinematography is truly sublime and makes even the most otherwise mundane of shots - people talking in a room, for instance - look immaculately composed and visually enticing. But his exterior framing is simply majestic to behold. From the likes of the river fishing sequences, featuring tremendous panoramic views of the landscape and the woods which are unsurprisingly beautiful to look at, to the simple tracking shots of characters ambling down the busy streets, which are, Catch And Release can be quite a sumptuous film to savour. Lindley enables the plot to live and breathe in a way that Grant's script, despite being much better than many others in the genre, cannot. He literally opens the movie up and allows the characters room to roam.

But, even considering all these better-than-average qualities, I sadly remained emotionally unconnected to Grey and her plight, and despite the ensemble cast coming across well and never irritatingly over-egging their characters - even Smith, which is a minor miracle in itself - I was left feeling underwhelmed by it all, and came out the other side of it to find myself sitting beneath a big fat cloud named “So What”. But I will cheerfully concede that Catch And Release will be a tonic to many other people, who will find simple solace and joy in the story's heartfelt message and determination to be thoroughly genial. Never as funny, nor as dramatic as the subject matter could have lent itself to being, Susannah Grant's ode to acceptance of the flitting and elusive nature of love remains an interesting and certainly well-written addition to Hollywood's ongoing thesis on the fragility of human emotions. Although it provides no new answers to many tangible and heartfelt dilemmas, the film and its cast manage to elevate the topic through sheer likeability. Therefore, if rom-coms are your thing, then this may well float your boat.

Certainly worth a look if you like this type of tale.