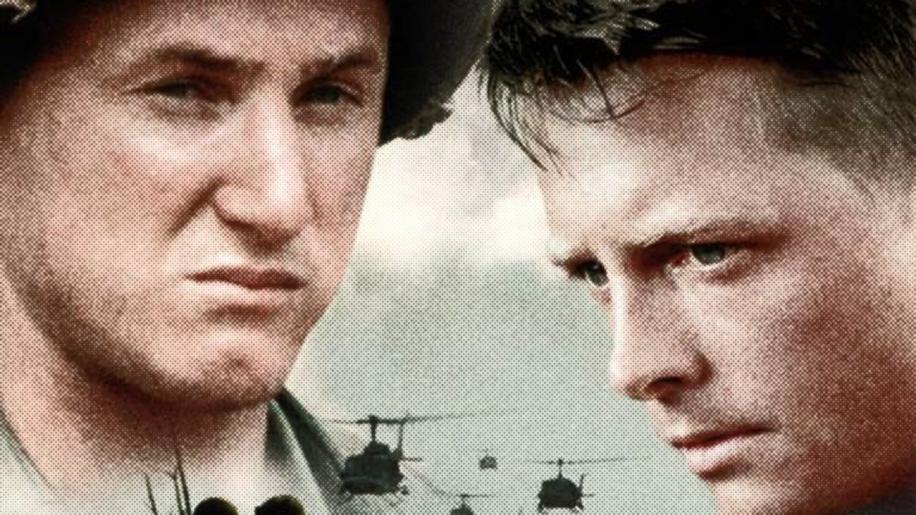 Whatever my misgivings about the film itself, the transfer that Sony have provided for this Extended Edition is simply amazing. The anamorphic 2.40:1 image is stunning to look at, with rock steady visuals, deadly accurate framing and a level of detail that belies a seventeen year old film. The colours are splendid - full and rich and never prone to over-saturation or smearing. The black levels are wonderful - just check out the tunnel sequence near the start, or any of the night-time scenes. Skin tones are spot on, and there are a great many close-ups to prove that. Eyes gleam, foliage glistens and blood is suitably deep and garish.

A sharp image supplies heaps of detail, from the sweat on Hatch's brow, to the glinting on the ammo belts. The rain on the leaves and upon their ponchos looks great, too. Even distant jungle looks clear and well-defined. There are two marvellous shots that showcase great detail, wonderful contrast and DePalma's sublime framing - the first occurs when Eriksson tells his friend back at the camp what Meserve is planning to do, with lightning and rain shimmering outside against the pure black night whilst the characters stand inside amid a warm orange and shadowed glow; the second is the immaculate shot of Eriksson and Meserve out in the trees under another rainstorm after the rape has taken place. Just look at the blue-lit image amid the lightning and the silvery rain. Fantastic.

However, there is still some occasional print damage, and some grain that finally shows up during the hearing towards the end. There is some minute edge enhancement, too, but this tends to reveal itself really only on the odd silhouette of mountain peaks, or a figure in the distance. A great transfer, overall.

The fun stuff doesn't stop with the audio transfer, either. The DD 5.1 mix is very well thought-out and presented with absolute clarity and a tremendously forceful presence when required. There is some nice bass on the mortar attack, the river boat explosion and the latrine-fragging incident, but we're not talking out and out bombast here ... just a reassuring sense of power. The rears are used often, whether it is ambience, musical boost or gunfire, but I felt that some of the rippling bullets sounded a little bogus and unrealistic. The choppers, too, didn't sound as convincing as they could have done, despite whump-whumping their way across the soundscape.

Dialogue is always clearly audible and Morricone's score benefits from a sterling presentation that swells right around the set-up.

All in all, an enjoyable aural experience ... just don't expect the whiz-bang supersonics of Black Hawk Down.

Apart from theatrical trailers for Tears Of The Sun (which is presented in DD 5.1) and Black Hawk Down (which isn't), this Extended Edition comes with only two actual special features - both compiled and presented by famed movie documentarian Laurent Bouzereau. The first is Eriksson's War - A Talk (and not a Conversation as it states on the box) With Michael J. Fox. Lasting for 18.03 mins, this is a frank and honest and well-discussed series of recollections from the actor, who covers all bases from his desire to leap from Family Ties to something weightier, from the training he and the other actors underwent at the mercy of Dale Dye to the phenomenal bout of sickness that they all suffered in Thailand. He addresses the moral decisions that his character makes, and pays remarkable respect to Thuy Thu Le, Penn, DePalma and the people of Thailand. He fondly recalls the dog that he rescued from being eaten and offers some brief, but interesting, insight into the working practices of Brian DePalma and his sometimes intense take-after-take methodology. It is a good piece, with Fox clear, candid and comprehensive.

The Making Of Casualties Of War, clocking in at around half and hour, is also pretty good value. DePalma discusses his feelings about the war and how his stumbling across this particular story summed them up. We also hear from producer Art Linson and editor Bill Pankow. Featuring lots of clips and quite a few recurring production photos, this piece covers the casting and the actors' subsequent training - one military advisor was apparently fired for pushing the actors too hard (not hard enough in my opinion) - and reveals some snippets of the original script, and even provides tantalising evidence of a different ending to the movie. An ending that Rabe would purportedly have been much happier with. One nice little anecdote surrounds the train trestle that forms the setting for the distressing murder of the village girl ... apparently this was the real-life site of the original bridge over the River Kwai.

Not a very comprehensive set, really. Apparently, these features were the same as on the original release, but this Extended Edition is the only version that I've seen on DVD, so I can't really comment. But, if this is true, it seems very doubtful that it is worth upgrading to this release if you already own the previous one, with or without the extra six minutes this one contains.

There is a powerful story in here somewhere, and one that needs to be told. But DePalma overblows the whole thing by being too elaborate and too theatrical. He nevertheless provides some indelible images along the way and finds some terrifically bravura performances from Fox and Penn. Casualties Of War received some positive reviews upon its theatrical release, but it never did that well at the box office. This isn't particularly surprising given its grim subject matter. But DePalma's films - even the naff ones - have a habit of becoming cult items. However, even if it is way better than the likes of Snake Eyes or Raising Cain, I doubt very much if it will ever be considered one of his more accomplished outings, no matter how many more minutes he adds.

Sony's new release has a terrific picture to recommend it, and the sound - give or take a little bogus effect here and there - is still pretty engrossing fare. The extras aren't too bad either, although a commentary track would have been nice. The Fox interview is good value in my opinion, though.

Not a great film at all ... but an interesting attempt from a director who was attempting to break new ground - but couldn't help bringing along all his usual tricks as well.