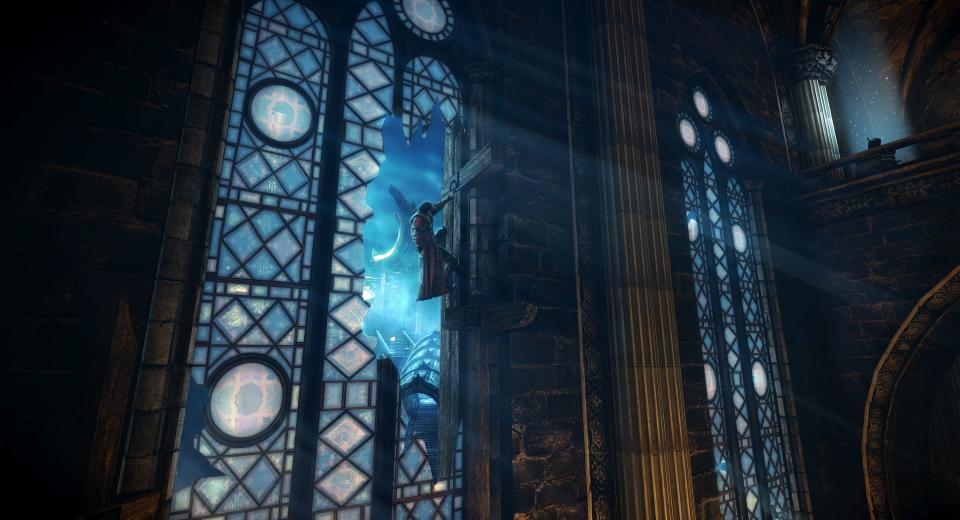 Within the rebooted Castlevania mythology exists the Mirror of Fate, a magical object possessing the ability to expose the owner’s past and reveal their future. As Dracula this powerful artefact once guided your hand, though now its remnants are simply an heirloom of your still mortal bloodline. A link to their dark past, they carry it so as not to forget. More than that, however, this single object sums up so much about Lords of Shadow 2.

Several hours into the adventure it is conjured into existence by the personification of your guilt for your lost son. Far from being the strangest entity you’ll meet, silver haired and with a thick Scottish accent your wee one pleads with you. Only a minute ago this imaginary lad was playing with toy soldiers but now he’s consumed by an as yet unmentioned broken mirror, demanding that you, Dracula, run fetch quests to find the missing shards. It’s a strange request but you are his imaginary dad after all so what can you do?
But just like the mirror, Konami’s classic franchise is fractured. The overarching story may be of Dracula rising from the grave once more to vanquish Satan, but our journey is one that severely lacks flow. Smaller narratives come and go with little consequence; mechanics appear, irritate, and are forgotten; and areas that look impressive on aging hardware are so small that you often wonder whether those few seconds of visual polish were worth the loading that’s regularly endured. It’s a game of many parts, few of which come together to form a whole.

Right from the off they feel the need to cram as much information as possible down your neck, hampering the flow. The opening act is spectacular. Pulling a leaf from God of War, Dracula fights a lumbering mechanical titan, the dark lord climbing its limbs and fighting knights on all manner of body parts as it pounds your castle. But rather than keep the adrenalin pumping and moving the fight on, once you’ve dispatched the last of the forces of good you’re presented with a fifteen-minute info dump. In one of the densest cutscenes I’ve ever witnessed it fills you in on the entire history (and possibly future) of the Belmont clan. It then drags you to the modern day where you’re weak from a sleep that has lasted many centuries and over the next couple of hours pounds you with collectibles, dark forces, skills, time travel, wolves, summoning family memories from your subconscious, unlockable combos, insipid stealth sections, a castle that hates you, magical immortals, locked doors, demons…

There came a point where I felt that Castlevania and I weren’t going to get on. Such was its neediness to tell me about everything that I could ever do within its digital world and within such a short space of time I felt overwhelmed. The utter barrage of information, locations, and storylines were stilted and confusing. Whether it was a recap and had I played the original Lords of Shadow I would be thanking them for the reminders, it’s hard to say, but for someone fresh to the series it was not a welcoming experience. At this stage the most disappointing aspect of this was that behind the disjointed approach were elements that I really liked. The titan attack in particular was very notable as it conveyed just what power you possessed; you were an immortal capable of tearing down a machine the size of your own castle. It sets a standard for the game that whilst the sheer scale may not be repeated the sentiment is.

Boss fights litter the game. Large boss fights. From huge blobs made from your own blood to enraged demon dragons they all take place on a grand scale. If you’re not dwarfed then you’ll be out numbered as developer Mercury Steam never reuse a trick and ensure each one you face is not only varied but memorable. It’s a commendable achievement that’s made possible by a marriage not just of the twisted imagination of their concept artists but the possibilities at your fingertips when it’s time to fight.

It’s a game of many parts, few of which come together to form a whole.

Your primary weapon is a blood whip, a carryover from your previous life as Gabriel Belmont. It’s an all-purpose weapon capable of hitting from quite a range whilst also offering an element of crowd control as you lash it in wider arcs. To complement this there’s also the void sword, a vampiric blade that tops up your health with each slash to your foe, and the chaos claws, flaming gauntlets that hit with such a force that they will break even the surest of guards. Both are powered by the blood of your enemies so are not always available but they are switched between with a dab of the shoulder buttons, keeping the face buttons free for stabs and sweeps. It’s a simple but effective system, allowing combos to be built up on just a couple of buttons. All this is laced with the red of the whip, the blue of the sword, and the orange of the claws, creating a colourful display.

With these three weapons in hand combat is always an interesting prospect, not least because even on the default difficulty your opponents won’t be found wanting. Your powerful whip will wreak havoc but sooner or later it will be blocked and you’ll face a counter. Some can be blocked in turn, opening up an opportunity for swift retaliation, but some are so powerful that evasion is the only choice. This all results in a wonderful ballet as you lash out before dashing sideways in a blur of red mist to avoid a crushing blow, following up with your claws unleashed to smash down on the now stunned adversary. The climax being either them evaporating into a cloud of glowing dust or standing there stunned, inviting you in to drink their blood, restoring your health in the process. Beyond the basic brawl though there are levels of depth that, considering how much it reinforces every other aspect of design, it oddly lets you discover yourself. The void sword especially is crucial during the lengthy boss sequences as it’s worth keeping it in reserve so as to top up your flagging health. The mist ability, too, which you gain later on operates as a second dodge, letting attacks pass harmlessly through your smoky form. With all these tricks at your disposal combat feels strangely rhythmic when compared to the staccato feel of the game as a whole. The ease at which you move, the simplicity of executing an attack, and fluidity by which you switch weapons only adding further to this disparity.

Thankfully as Lords of Shadow 2 progresses its ADHD does settle down. Environments may still flick by on a regular basis accompanied by strands of narrative, but on the whole it relaxes. At this time you can then begin to appreciate the adventure and the battle you have on your hands.

It’s not all battle, though. As you explore the old castle it’s full of traps and hazards, large sections have crumbled away leaving you clambering nimbly across broken stone and loose beams to reach new areas. To keep the background looking lush grips and handholds blend with the scenery having to be called out by small clusters of squeaking bats. It’s a strange aesthetic and the actual routes they highlight are fairly routine; this isn’t like the Castlevania of old. Barring the mist ability that sneaks you through iron gates, it doesn’t have the same penchant for hidden areas. The odd secret may be hidden out of reach but your home and the city around it never feel coherent, just levels lashed next to each other, removing the want to explore every inch once you’ve completed the main quest. Many of the areas have one off puzzles or mechanics, but most add little to the experience. Transforming into a rat or blinding a guard with a swarm of bats are reoccurring favourites, though those mediocre stealth sections are but a ray of sunshine compared to the instant death suffered when hiding from an satyr in a garden full of rustling leaves. There’s even a brief portion where you join a co-op buddy, but that only lasts a couple of moments before yet another concept is thrown to the wind.

You can count on me

Castlevania: Lords of Shadow 2 is a game trying to do too many things. It touches upon so many stories and mechanics that I don’t feel 1,500 words are enough to describe the scope of its flawed vision. Rather than focusing in on a couple of core concepts it spreads itself far too thin, dabbling in areas that more often than not detract from the whole rather than enhance it.

What it does do incredibly well is combat. A deep and easy fighting system is matched with a memorable series of bosses and set pieces, handing Dracula the power and stature he deserves. Sadly, for as stylish as besting building sized demons is, it cannot salvage a game that is so fractured that it only gets into its stride during the closing stages. Hopefully Konami will reflect that, with just a little pruning, this could have been so much more.