Castle in the Sky Movie Review 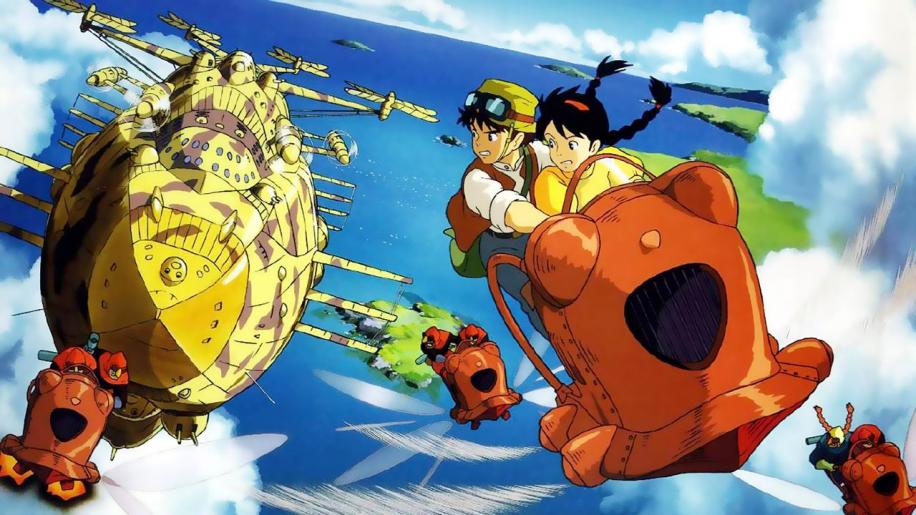 Few animators have claimed a place in the public consciousness as Hayao Miyazaki has, and even fewer still have managed to do so in a modern era where Disney features and similar family-friendly animated tales of magic and mystery have become displaced by audiences taken with cutting edge 3D computer generated imagery from the likes of Pixar. The shift in attention has as much to do with the aforementioned studio’s brilliance at capturing the hearts of both adults and children alike with striking imagery and subtle humour as it is attributable to a noticeable decline in the output, both in terms of volume and quality of the previous standard bearer for all things animated – Disney.

So it seems only fitting that a man so inspired by the works of old Walt should be the primary defender of the art form as we move into the new millennium, and Laputa: Castle in the Sky was the first of the Studio Ghibli manifesto to stake a claim to the relevance of this type of artistic expression. Having scored both a financial and critical success with 1984’s Nausicaä of the Valley of the Wind, Hayao Miyazaki, Toshio Suzuki and Isao Takahata took that momentum and founded Studio Ghibli – their first feature would be Laputa: Castle in the Sky.

A classic tale of childhood wonder and battles against adversity, it would not only set an early high benchmark for all later Ghibli films but also, in conjunction with the previous feature Nausicaä, help build the framework through which fans would come to view all films produced by the studio. The themes of discovery, nature, flight and a world that is both recognisable but skewed with elements such as intricate machinery and perspectives that are stretched would all be found in this early parting shot across the collective attentions of film fans.

The story conforms to the template of many narratives of fantastical animations, mixing the standard elements of magic and children on a voyage of discovery. There is scant time for introductions as Laputa immerses you in a world of the unexplained, as a young girl, Sheeta, travelling on an air ship finds the vessel attacked by pirates travelling in their own otherworldly elaborate crafts. After striking one of her captors within the airship, she manages to escape, but this only results in her falling seemingly to her peril. Far below, in the humble surrounds of a mining village is Pazu, an adolescent orphan who spends his days toiling away with the machinery that aids the workers and is key to the prosperity of the community. What he witnesses, a girl floating from the sky, unconscious, with a glowing crystal around her neck, is the moment that changes both the two youngsters’ destinies.

The artistic depiction of the village in which Pazu lives is said to have taken its roots in Miyazaki’s time spent in Walesaround the time of the miner’s strikes, and it is easy to see the influence straight away. As with everything within a Ghibli universe, the environments and objects found inside them have a tangibly real quality yet have been moulded to contain enough of the fantastical and avant-garde to make you sit up and take note. As Pazu rises in the morning he takes the ladder onto the roof of his stone oast-house style dwelling and plays the trumpet as a sort of dawn chorus, whilst the doves he has let out of the roost on the roof soar over the village below. The rolling fields of greenery, the rows of unassuming terraced stone houses with their slate roofs and the birds weaving over the host of brick chimneys – the mining community atmosphere is punched into the narrative with style and panache, yet it not only sets the scene but also lays the groundwork for the characterisation of Pazu, placing him firmly in the role of the classic working class child that looks beyond the walls that confine, a la Charlie in Charlie and the Chocolate Factory.

Unfortunately this scene also highlights one of the problems that some may find with Laputa: Castle in the Sky on disc, namely the Disney dub. Having gained the rights to distribute Ghibli films in the US, Disney set to work on an English language track for Laputa featuring young stars of the day, James Van Der Beek (he of the Dawson’s Creek and large forehead fame) and Anna Paquin (X-Men). This creates a slightly different dynamic between Pazu and Sheeta as they are invariably older than their Japanese voice actors and as such, male and female adolescents on an adventure invariably have a more romantic atmosphere of possible young love. Now this is far from striking, and the voice acting alone couldn’t shift what was already on the screen into altogether different waters, but the dub differs in a few places to emphasise this fact, namely upon hearing Sheeta’s name, in the original Japanese version Pazu comments as a child would, with a hasty “nice name” and moves on without taking breath. In the English dub this becomes a Van Der Beek acting master class of portraying a youth several years his junior (complete with wavering voice, like a kid with bum-fluff trying to buy cigarettes whilst his voice breaks into pieces), earnestly declaring with what one assumes to be dewy eyed wonder that Sheeta is “a beautiful name”. The shift from “nice” to beautiful” may not sound significant, but along with the manner of delivery, it wreaks of the kind of Disneyfication (I may have made that word up) that is constantly striving for a different, more tweenage market.

Other changes were also made, namely the score. Music maestro Joe Hisaishi’s original score was not necessarily one of his best, but again Disney being unable to deliver something in its original condition felt the moments of quiet and subtlety needed a bit of oomph. Hisaishi agreed, added to many of his original compositions and significantly altered others and, once it had the Miyazaki stamp of approval it was all set to go (though it wouldn’t be released for another few years after the relative failure of Princess Mononoke in the US market).

The story and its themes prevail through even the fog of the Disney dub though, and in some instances actually have a touch more vigour to them. No matter which version you watch, the core of the narrative remains the same, it just shifts in tone slightly from wistful to rousing, child-like innocence to tweenage emotion. The imagery however simply could not be sullied by even the most ham-fisted attempts at Americanisation; the unmistakable finesse of cloud scenes and the wonder of animated flight are pure Ghibli through-and-through. The sense of wonder is perfectly drawn from the viewer as an undiscovered land looms into view from through the clouds, mixing different M C Escher-esque architecture full of steps and angles with multiple visual cues of the eternal power of nature. Even if you have grown tired of similarly rehashed eco-moralising having been rammed down your throats from many pretenders and copy-cats in the intervening years since its initial release, Laputa: Castle in the Sky still contains all the undeniable stamps of Ghibli soul that simply cannot be replicated.

As a film it has seen many duplicate its style and message, but no matter the quality of the animation, the likes of Origin: Spirits of the Past and similar titles can never quite capture the aura that surrounds those Ghibli features directed by Hayao Miyazaki. They speak to the child full of wonderment that resides in us all still but do so in a manner that never seeks to merely evoke childish emotions. Laputa works not only as an homage to various literary and cinematic moments (with one of the best takes on the King Kong finale you’re likely to see in animation, almost as full of angst and pity for a misunderstood lumbering beast as the 1933 classic it takes it cues from) but also as a remarkably prescient vision of the direction animation in both East and West would take. Full of airborne adventure, magic, myth and mystery, Laputa: Castle in the Sky is an odyssey of discovery, infused with an infectious charm, that few animators since the heyday of Disney are capable of delivering.