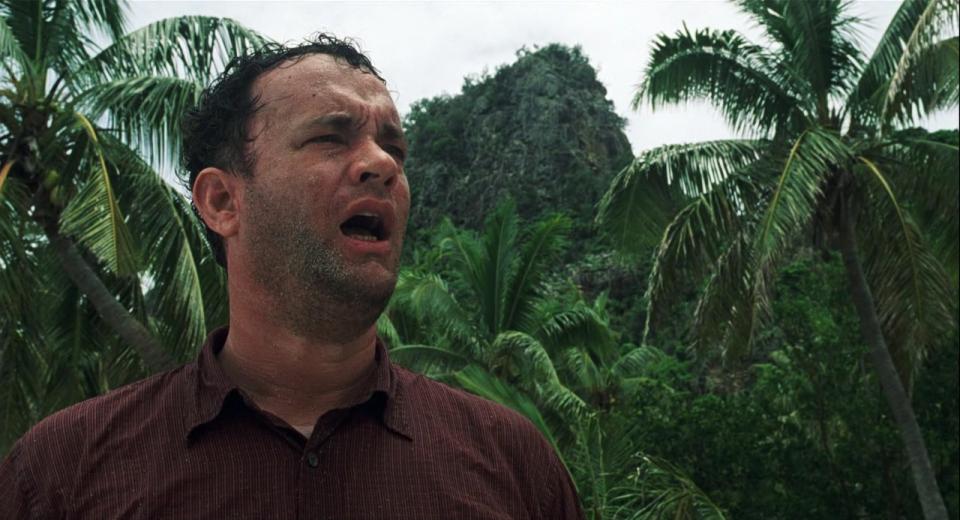 For an actor to make you feel genuine pity for their character takes a certain kind of ability. It is a rare skill. Some do it well, others less so. For example, I find it categorically impossible to ever, and I mean ever feel sorry for Will Smith. I can't do it. It's not that I dislike the guy, or enjoy seeing bad things happen to him, but whenever I'm supposed to feel sorry for him, I draw a blank. I am Legend - nothing. The Pursuit of Happiness - Zip. Bruce (Perma-smirk) Willis is another example; pity is not an emotion I can willingly offer up for him, despite many of his roles in the past demanding it of me. The Sixth Sense? Stop laughing, Bruce. Unbreakable? Stop laughing, Bruce. You get the picture; some actors just can't draw that emotion out of me. Tom hanks, on the other hand, I feel sorry for even when I'm not supposed to. He's one of those actors that I find exceptionally believable in his roles, and one that I have no problems empathizing with. Forrest Gump, Big, Philadelphia, Saving Private Ryan, The Green Mile; even writing the names of these movies out is making me feel a little pang of pity for the guy. And then there's Cast Away, and on this one, though an unquestionably brilliant performance, I'm divided as to how Tom makes me feel.

The fact is, that I just don't think I like Chuck Noland (Tom Hanks) very much. It's not that I'm given very much reason not to like him, but there's something in the way that Hanks plays this role that makes me wonder if I could sit and have a beer with the guy or not. I can completely imagine sitting down over a cold one with Capt. John H. Miller, or chewing the fat with Michael Sullivan (though admittedly, with one eye over my shoulder here), but Noland seems to exude a faint air of mild superiority, though it's never suggested this is the case in the script or screenplay. This is testament to the ability that Hanks has consistently shown over the course of his illustrious career, and his talent for evoking emotion from his characters that you just can't write into a script or a screenplay. It's a rare gift. Enough about my reservations about whether I could sink a few with Chuck Noland or not, let's instead take a look at what the movie's all about.

The story follows Chuck Noland, a middle management Fed Ex analyst who works as a Liaison and problem solver, often posted in foreign countries to help iron out potential problems in setting up sorting offices around the world. His life is run by the clock, and he is a loyal employee the global delivery giant. Noland, home for Christmas to see his family and girlfriend (Helen Hunt), is suddenly called away to help with some business issues abroad. He leaves the idillic warm glow of being surrounded by family and loved ones during the holiday season, and boards the ill fated Fed Ex plane. Bad weather and failing navigational instruments result in a terrific plane crash, of which Noland is the sole survivor. After drifting amongst the wreckage for some time, the lucky survivor finds himself washed up on a desert island, completely isolated and utterly alone. With only the rubber material from his lifeboat, and the occasional washed up Fed Ex parcel, Chuck Noland struggles to survive on this uninhabited and unforgiving land mass, located somwhere in the middle of the Pacific Ocean.

Wrestling with both his sanity and his unwelcome solitude, he finds some solace in imparting an imaginary personality on to a Volley Ball that washed up on the shore. It's therapeutic to the human psyche to speak aloud, and Wilson (the brand of the ball), soon becomes an entity without which Noland would surely have lost his mind. Wilson, though merely a volleyball, has the effect of allowing Chuck to express himself. It gives him a reason or excuse to voice opinions on his situation, and is, in effect, a sounding board for Chuck to weigh his thoughts on day to day things. He becomes increasingly attached to Wilson, and it's here that Tom Hanks is really allowed to shine. It's a dramatic performance on the whole, but it's his interactions with this inanimate object that really astound me. No wonder he received nominations for best actor in both Academy and Golden Globe awards.

Over time, Noland's hopes of being rescued slowly erode, and when survival is no longer the primary focus of his existence, he sets about attempting to build a raft to try to escape the island's clutches. With the odds immeasurably stacked against him, and the consequences of daring to face the open sea on nothing more than fashioned logs so enormous, it is a frightening prospect, and a difficult decision to make – and one that Chuck clearly does not make lightly.

The last time Zemeckis and Hanks paired up, they won six Academy Awards for their efforts on Forrest Gump. Six years later, Cast Away hit our screens, but although a slightly left of centre offering by hollywood standards, was met with critical acclaim. It was not without its naysaying critics though, and was equally met with some critical apathy. Part of the issue with Cast Away dividing critics at the time, is that so many of them seemed to take the premise of the movie so seriously. Not to say that the examination of man's relationship to nature and the effects that enforced solitude can have on the mental psyche is not relevant, it's a huge part of the movie - in fact, it would be fair to say that a large part of Hanks' outstanding performance in the movie was in some ways attributable to his ability to comprehend these relationships - but to dismiss the obvious comedy of certain situations so easily, and to focus only on the more intense and dramatic elements of the movie, is to in some ways miss the point entirely. Zemeckis offers us a dire situation - one that, although perhaps not in a literal sense, we can all relate to - and invites us to experience both the highs and lows with his central character, Chuck. The discomfort of solitude, the rediscovery of ones self, the reshuffling of the hierarchy of what is truly important to us. With that, he also gives us moments of comedy, light and hope; all things that despite the dark nature of the film's narrative, are impossible to neglect. Tom hanks plays the part is such a way that allows us to reflect on how we might react in these situations ourselves, as unlikely as they may be, and also pulls us into his moments of elation and humour.

From the comfort of our living room, we experience Chuck Noland's desperation and fear and loneliness so vividly. As I mentioned, the lows are not without contrast though, such as the primal sense of victory and elation when Noland manages to create fire for the first time. So authentic is Hanks at portraying this emotion that you really do feel it with him. During pre-production on Cast Away, Hanks gained a lot of weight in order to fit the bill as Chuck Noland, a middle aged and slightly plump fed ex man. Production was halted half way through shooting so that Hanks could spend a year losing weight and growing his hair. Incidentally, it was during this time that Zemeckis and his production crew filmed another movie - What Lies Beneath. Waste not, want not - and time is no exception for Zemeckis it seems. Once Hanks had morphed into a much more wild and slender version of Chuck Noland, production resumed. I'm not sure if I'd call this “method”, but I'd certainly call it brave and committed from both Zemeckis and Hanks – either way, it pays off, as the transition is astounding.

It's not without its problems, however. Set in three acts with a sort of dowdy epilogue, at times it feels rushed and a little clumsy. The first act feels prolonged. There's a lot of time spent introducing the characters and helping us get to know their relationships with one another, and though valuable information that allows us to empathize with the main protagonist later on, if felt unbalanced. The second act is a stark contrast to the first, in that we experience Chuck's complete solitude and all that goes with it. An examination of man's resilience to extreme circumstances and the results those circumstances can have on the mind. It's this second act in which the majority of the movie takes place, as the third act is all but 20 minutes long. Rushed and almost tacked on, we have an epilogue that, frankly, did no favours for the movie – perhaps a product of the movie's ending being shown to focus groups and didn't test well without this epilogue with preview audiences. I'll hasten to add, this is pure speculation on my part. I'm just trying to make excuses for it really.

However, the movie's positives far outweigh its negatives. It's very much a movie that is the sum of its parts. Without Hanks, I suspect this would have been a sizeable flop at the Box Office, as it's his ability to bring a sense of realism to the central character throughout his plight that gives the movie its true credence. A Tom Hanks vehicle, probably – but such a performance he gives, that you won't find me complaining much.