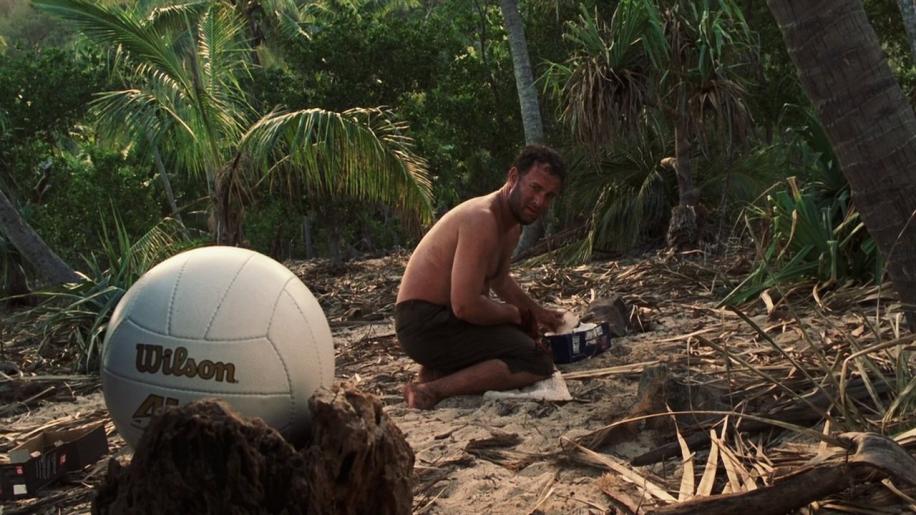 Robert Zemeckis can always be relied upon to produce a credible, enjoyable and entertaining film. Tom Hanks at the time this was made was riding high on the hog of Hollywood's most wanted and bankable list. Collaborators before on Forest Gump, which proved to be a watchable if somewhat sugary sweet tale, I think that Cast Away was in the bank even before it hit the screens. So what can we actually find on this desert island disc?

As has been mentioned many times before and no doubt will still cause discussion about its merits, Zemeckis extensively used the FedEx brand and logo throughout the feature; many had thought he had sold out to make this movie. Nothing can be further from the truth though, as Zemeckis points out during his commentary no money changed hands and so he wasn't at their mercy in terms of artistic integrity. Does its use change the nature of the film, well no not really! As I say it's extensive and certainly during the opening scenes it's perhaps overused to my liking; apart from that though it's never distracting nor excessive. Besides, it's been commonplace for too long a time. Blade Runner anyone with its use of brand names from soft drinks to hard liquor?

Anyway the story introduces us to Chuck Noland (Tom Hanks), his girlfriend Kelly (Helen Hunt), some of his immediate family only in passing, and his work which perhaps he has the most emotional investment in. A highflying trouble-shooter who co-ordinates start-up franchises or current ailing distribution offices he has to travel to one of these over the Christmas period. Organising this with Kelly he jumps on the next FedEx flight, swapping his gifts with her before departure in the car whilst parked outside the security entrance of the FedEx departure area.

On route Chuck's plane goes down somewhere over the Pacific. All crew, consisting of pilot, co-pilot, navigator and fourth crewman are killed on impact, either by the crash itself or by drowning in the icy depths to which the broken fuselage sinks. Chuck himself miraculously escapes this same watery fate and steered only by the winds and the current he is now adrift in his inflatable life raft. As fate would have it he is washed up ashore on a small deserted island, hundreds of miles from nowhere. Imprisoned on his new paradise by an all-encompassing reef ensuring there is little chance of Chuck making an escape; the crashing waves continually pushing him back to his island hell. A surfer's paradise this might be but for Chuck this becomes his home, place of shelter, mother providing food, and prison for his body, mind and soul.

Cast Away comes in three distinct sections, three acts. During the first all of the main characters are introduced and this really only consists of Chuck, Kelly and a work colleague Stan (Nick Searcy). Chuck himself is obsessed with schedules, time and structure; not for one moment can he rest without his trusty pager at his side. Neither can he phone Kelly from Moscow without his mind really focused on the business task in hand at the time. He's a detached sort of character, organising his life for his work, with precision, and this is how he looks upon those closest to him also; Kelly constrained by his greater mistress of work and time. Even to Stan whose wife is suffering from cancer Chuck can offer no emotional support, only offering a solution as he would to an ailing business opportunity. He lacks true warmth and feeling, a people person he certainly isn't.

The second section, the main of the three, sees Chuck marooned upon his island. Like earlier the first thing on his mind is not the image of Kelly he now carries around with him but his trusty pager to see if it can be used to solve this particular problem he now faces. Hanks has always been an worthwhile enough actor (not a great one in my opinion - look at Road to Perdition for an example of him cast out of character) and he really produces the goods here. First he's confident in business and he expresses a character that really isn't in touch with his own emotions or those around him. Once his character comes to realise that he's on this island for what might be his lifetime he looks inwards, into his soul, and comes to terms with the man that he really is. During this time we see Chuck go from faint hope, still organising the few packages which are washed up. His isolation becomes moving, and at times downright amusing as we see his feeble attempts at survival and finding his own Man Friday, Wilson. Wilson is a character all of his own, facial expression always fixed, he never utters a word; but he is there for Hanks to play off and for Chuck to relay his innermost feelings to without going completely insane. Wilson most definitely now has a cult following; not bad for character made from a volleyball.

Spoiler alert, the following discusses some of the end scenes so please if you haven't seen this yet (and I urge you to do so) then please skip this chapter. Whilst this second act sees Chucks downfall into solitude and eventual re-emergance as a passive, more patient man, the third sees Chuck break free of his prison to return to the world he left some 4 years earlier. In this new world Hanks again produces a credible performance as a man trying to piece together a life which for him was on pause, but for all the rest has moved on. Hanks shows us a world with new eyes, a world riddled with meaningless objects, a world where he can actually discuss his feelings with others. Hunt offers up a sterling performance as a woman who at her heart still loves Chuck to her core, but in her reality now time has also progressed, she has new responsibilities. The scene where the two meet again after these four years is wonderful in its presentation, keeping the viewer guessing until finally it's get the hankies out time. Even to this day after many viewings of Cast Away I still have a lump in my throat during these final moments.

I have to say that I always enjoy Cast Away; and must admit the first time I saw it I was astounded by Hanks' performance so much that I immediately watched it again once it ended. The fact that any director has allowed any audience to relate to and feel so much raw emotion for a volleyball is an outstanding task. Still to this day, like Chuck himself, I look upon Wilson as a trusted friend someone I hoped would be with me to answer all of my problems. The film itself progresses at a good pace, which for a feature where almost two thirds really only involves Hanks on his own on the island, is a good achievement in itself. I find Cast Away a worthwhile watch, incredibly emotional, sometimes amusing and, at times, intensely gripping following Chuck's journey into self realisation and the understanding of the importance of people, not structure.