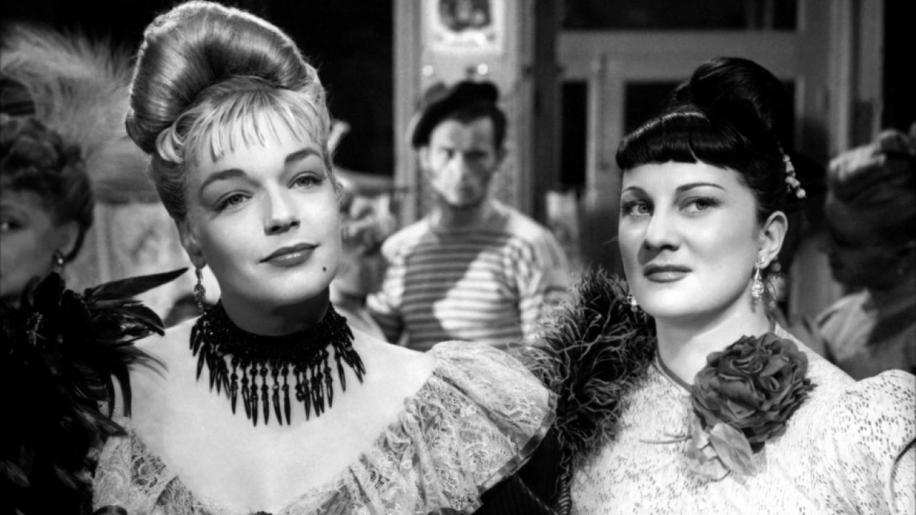 In short, it's an overwhelmingly sad love story about the feelings a man and woman share for each other amidst a torrent of bad luck and tragedy. It lures you into a delicious forbidden love story, only to dash all your hopes and dreams crashing to the rocks below.

It's another fine example of French Cinema though it attempts to break no real boundaries; at its heart, it's a tale of two people falling in love. Georges Manda (Serge Reggiani) is a simple carpenter; hard working, honourable, polite and dependable. Though hardly a formidable man in stature, to underestimate his fierceness when put to the test is to make a grave mistake. Of course, he's a gentle man and would never hurt anyone or anything without a good and just cause. Marie Casque D'or (Simone Signoret) is, for all intents and purposes, a working girl. Perhaps more appropriately described as an escort. She is bold and brash for a woman of the time. She knows her own mind and isn't afraid to speak it, something that can get her into, and out of trouble on occasion. With beautiful golden locks and good looks, she's a real head-turner.

The two meet when Manda, purely by chance, bumps into his old friend, Raymond (Raymond Bussières). Manda is mending a stage for musical performers at an outdoor eatery and cocktail bar, and Raymond arrives with a group of his friends. The two embrace and marvel at the fact that they haven't seen each other for so long. After a brief reminiscing session, Raymond wants to introduce Manda to his friends. What's not immediately obvious is that Raymond's group of friends are in fact gang members, into organized crime, syndicates and protection rackets. Among them is Marie, a trophy for one of the gang members, but something tells us she's not at all happy with her place.

When Manda and Marie's eyes meet, the chemistry is electrifying. She only has eyes for him as she twirls in dizzying circles as she dances a waltz with her date, Roland (William Sabatier). Unimpressed by their obvious attraction to one another and flagrant disregard for the fact that Marie is with him, Roland shows his discontent by mocking the carpenter and going out of his way to make him look a fool in front of everyone. Setting out to embarrass Manda, Roland performs a childish prank, offering him a chair next to Marie only to pull it away at the last second, planting him firmly on his behind. Roland subsequently gets in Manda's face, but the carpenter keeps his cool and reacts with an explosive and surprisingly firm strike, knocking Roland out cold. His pride badly dented, Roland decides that he must teach this lowly carpenter a lesson.

Later, the two engage in a fierce fight, orchestrated by the notorious gang leader, Felix Leca (Claude Dauphin), and it's here that the film takes a sharp turn away from the simplicity of a love story. The outcome of the fight goes badly, and Manda finds himself gasping for air over the lifeless body of Roland. Blinded as he is by his infatuation with Marie, he suddenly finds himself drawn into a seedy underworld that he want's nothing to do with.

He and Marie leave Paris and head for the countryside. This doesn't go down well with the gang leader, Felix Leca. He's a villainous and cold man, who also has eyes for Marie. He sets about blackmailing Manda in an attempt to prize Marie away from him, knowing how unwilling she would be to leave Manda of her own accord. What seemed to be the start of a happy life for Marie and Manda begins to topple into a murky and treacherous world where they become pawns in a bigger game. With a climactic ending that is typical of French Cinema of the time, it's quite an emotional rollercoaster as we follow the two love birds through this tale of love and woe.

It's just about as engaging as you can get. The perfect out and out sunday afternoon matinée material. Though French cinema can be slightly on the bleak side, especially around the time that Casque D'or was shot, it starts out feeling like a breath of fresh air. Jacques Becker, who would soon go on to direct Ali Baba and the Forty Thieves, and later the masterful Le Trou, decided not to shoot entirely in the studio, opting to take some scenes outside. It's really quite a refreshing sight to see real world locations used in favour of sets, and with material this old it somehow makes you almost think that you can see the colour in the image. It wasn't all that common at the time, and it's something that Becker was lauded for by his peers. In fact, even the mighty Jean Renoir is known to have held Becker in high regard for his boldness at breaking out of the confines of the studio.

The casting was of paramount importance to Casque D'or. Literally translated, it means Golden Helmet. A less literal but perhaps more fitting translation is Golden Marie, a reference to Marie's beautiful flowing blonde locks. Strange then, that Simone Signoret was chosen for the role, since she didn't in fact have blonde hair at all. Of course it's no big deal really, and was easily rectified with a lick of peroxide, besides, if you find the right girl but her hair's the wrong colour, you'd be a fool to change the girl and not the hair. Becker was no fool, and he most certainly had found the right girl, and it's clear that Becker took great joy in filming her. She's incredibly well filmed here, and she carries the role with a healthy peppering of sass and attitude. Utterly believable as the sultry temptress, with a cheeky smile. The character calls for a strong woman, and Signoret is certainly that. Whilst her looks could melt a thousand hearts in an afternoon, she could probably beat you in an arm wrestle too.

Playing opposite Signoret was never going to be easy, and in Georges Manda, Becker needed to find a male lead that could not only carry the role of the carpenter well, but could make you believe that he was the type of fella that Marie could go for. Serge Reggiani is not powerful looking, nor is he tall. In fact there's actually a couple of inches conceded to Signoret which, on paper, doesn't read quite right. However, Becker saw in Reggiani something that isn't instantly obvious. Reggiani is perhaps one of the first method actors outside of the method movement in New York which had begun to slowly make it's way across the pond around the same time. He completely lives the role, assuming the personality, and the physical traits of a carpenter. Tough, quiet, bold and just. Make no mistake, when I first watched Casque D'or, I was pretty bamboozled as to how Reggiani was picked over someone like Jean Gabin. Seems rather an obvious choice, since he was one of the brightest stars of French Cinema, and he had a brutish alpha male stature to him. But, when Reggiani has a bit of screen time in front of you, you begin to see what Becker saw. It clicks together perfectly when he knocks Roland out near the beginning of the film. It's a big role for sure, and it's carried off brilliantly by a rather small man.

Perhaps the fact that, whilst filming, an on set romance began to flourish between Signoret and Reggiani goes against what I mentioned about Reggiani being a method actor, but I think in some ways, this romance actually pulled Signoret into the role even further.

The other casting choice of note in Casque D'or is Raymond Bussières. He plays Manda's friend, Raymond. He manages to convey a sense of dismay and guilt throughout his performance that is both understated and subtle. You could actually believe that he's Manda's friend. Bussières brings a lightness to the movie that is quite a relief at times. Another excellent casting choice.

Of course, in saying all this, it's also worth pointing out that for some folks, French Cinema at this time had a tendency to be a little on the bleak side. I most certainly wouldn't criticise anyone for taking that view, in fact, though I do love it, I would wholly agree. Casque D'or is no exception. The whole time you're watching, you're aware that things are not likely to play out well for the two love birds. The fact that it's based on a true story probably goes some way to solidifying this assumption too. Despite it's dark and bitter skewer of emotional undercurrent, Becker weaves together an intricate web of complicated narrative, but with an effortlessness that permeates through the whole movie, making it quite easy to watch. This is a rare skill for a director, but one that Becker undoubtedly possess. The story revolves around love, but it's about so many other things too; loyalty, friendship, bitterness, greed, and of course, loss. There's even the hint of a political undercurrent running throughout, subtly showing the hierarchical differences between the characters and their plots and schemes. The film's climactic ending, so typical of French Cinema, adds to the drama brilliantly whilst also avoiding some potentially heavy censorship. In fact, Becker manages to maintain quite a lot of control over his movie by how he shoots a lot of his material. With censorship rife at the time, Becker leaves nothing for the vultures to cut out. Even an on-screen kiss turns to the sky before it could be deemed “too long”. Clever indeed, and it shows a great understanding of the movie industry, allowing him to keep creative control for himself.

All in all, it's a wonderful movie, and a perfect candidate for a lazy saturday afternoon. Of course that's not to say that Casque D'or couldn't be enjoyed at other times too. I would hazard a guess and say that if you haven't seen it already, no matter what time you watch it, nor what day, you're almost certainly going to enjoy it.