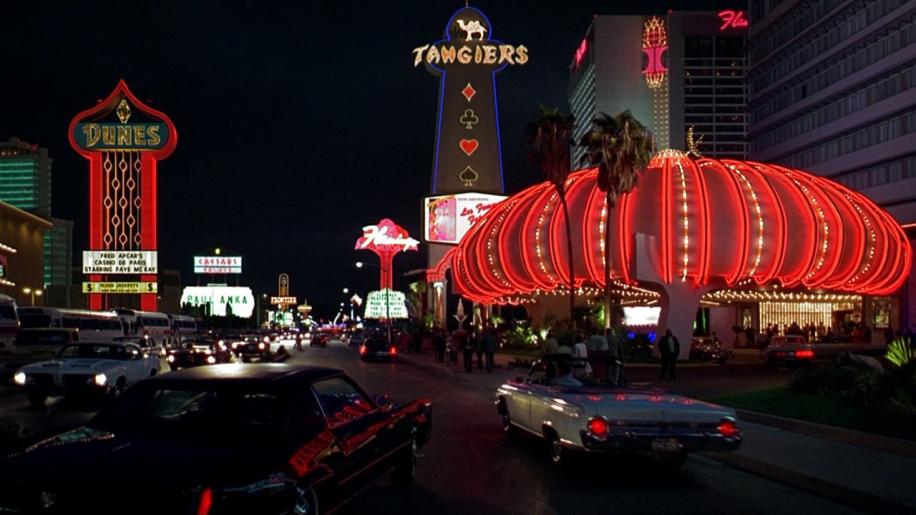 This newly Digitally Re-mastered Edition of Casino offers a decidedly variable image. During the earlier scenes of the movie, there is a noticeable amount of grain in the picture. This is obviously a result of the age of the original Super 35mm print but disappointing nonetheless. I would like to say that this grain is intentional, but they have managed to clean the image up considerably later on so I think this is just down to the actual authoring of the disc.

But it's not all doom and gloom. Once this initial grain has gone, the image is full of clarity, sumptuous colours and has a superb 'snap' to it. The Casino shots especially look fantastic with the deep greens and reds of the roulette and card tables. Skin tones too look natural and vibrant. Black levels are good but not up to more recent standards. There are some scenes which have a noticeably unusual 'temperature' to their colour. This IS intentional and is used to convey the 'heat' felt by the characters during these scenes. There were no noticeable artefacts or artificial looking edge enhancement although if you want to be critical, there was the odd case of some print damage with the appearance of a spec or two but all in all a pleasing, if not breathtaking image. Whereas the picture fluctuated in it's quality, the sound remains consistently good throughout. Although not full of surround action, what there is is subtle but beautifully effective. With Robert DeNiro and Joe Pesci both narrating throughout the movie, the voicing is especially well produced. Their voices are incredibly clear and have a tonal depth that escapes the confines of your speaker in a way that draws you deep into the movie. Explosions lack a certain amount of dynamics, again a sign of the times (gone by) but the ambience of the casino is captured effectively and overall the sound can be considered very good. A little more use of the LFE channel (even added post production) would have raised the grade to excellent. The extras are more for informative purposes but they do have entertainment value too. The bulk of them look at the history and facts behind the movie. Casino: The Story looks in some depth at the true life events surrounding the Las Vegas Casinos scandal which rocked the States back in the 70's. It explores the real characters behind DeNiro and Pesci's roles and gives some interesting facts behind the fiction. Casino: Cast and Characters is self explanatory but Casino: The Look gives a fascinating insight into how the makers captured the look and feel of Las Vegas during the 70's. Not only through the appearance of the characters but also in the use of décor, cars, signs in fact everything visible was scrutinised for it's authenticity.

Deleted Scenes offer not only deleted scenes, but also outtakes which on a purely entertainment basis, are the most rewarding. Moments with Martin Scorsese, Sharon Stone, Nicholas Pileggi contains some superb anecdotes with the Director, the Actress and the writer of Casino. Stone especially gives some fascinating accounts of how it was to work with DeNiro and how terrifying Pesci can be when he gets into character. Vegas and the Mob Featurette covers in further detail the reasons behind the Mafia's involvement and interest in Las Vegas, how they carried out their plans and how they ultimately failed in monopolising the gambling state. Production Notes are text based and there are about 27 pages to read!! Finally, History Alive: True Crime Authors: Casino with Nicholas Pileggi has interviews with the writer of Casino, Nicholas Pileggi who discusses his reasons for writing this story and his fascination with the history of the real events which form its basis. Plenty to refer to here but what I'd give for a Scorsese / De Niro / Pesci audio commentary! A classic movie which gets a well deserved special edition. Overall the package is good but with 10 years to plan it, it could have been a little more 'special'. Audio Commentary, DeNiro & Pesci interviews, Frank "Lefty" Rosenthal (Real life basis for DeNiro's character) documentary which aired during the original theatrical release of Casino and so on could all have been sort for this Anniversary Edition but at the moment, this is the best version you can get of Casino and as such, comes recommended as an essential buy if you're a fan of the movie or the genre.