"All right, I’m gonna give you a choice. You can either have the money and the hammer or you can walk out of here. You can’t have both. What do you want?" 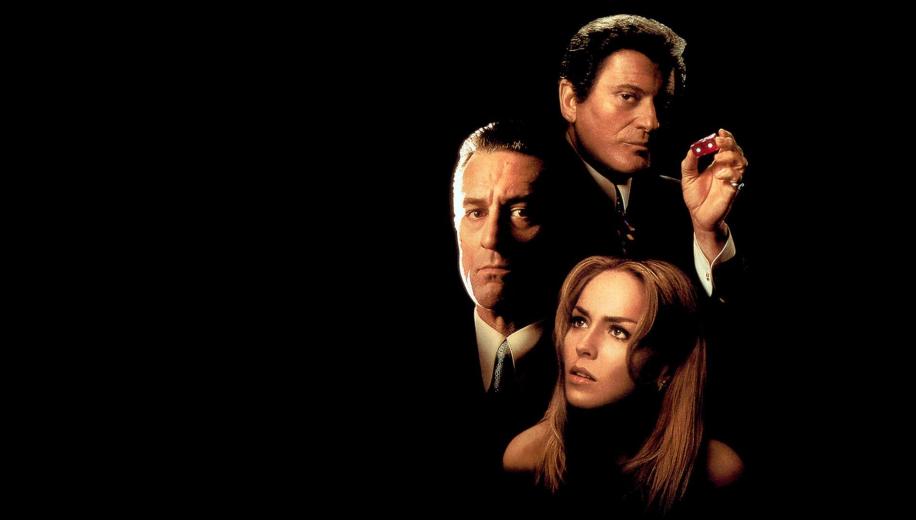 With the 3.5-hour The Irishman due for limited theatrical release shortly, reuniting Scorsese, De Niro and Pesci and topping both their 3 hour Casino and their original 2.5 hour Goodfellas, it will be interesting to see if the trio (losing writing collaborator Nicolas Pileggi but gaining a bigger ensemble cast that also brings in Pacino and Keitel to make for an absolute dream team of master actors) can bottle lightning for a third time.

Whilst Goodfellas is an unequivocal Scorsese classic - infinitely quotable, marvellously memorable, and energetically brutal - just five years later their reunion for this 1995 Vegas crime epic would be arguably even more stunning, refining the raw ingredients that were brought to bear in the 1990 mob story and turning in a spectacular study of the Vegas mob-ruled heyday, working as a surprisingly effective companion-piece to Warren Beatty's underrated Bugsy (which charted the tragic birth of Vegas), and effectively charting the subsequent rise and fall of what was, for a few years, one of the biggest licensed criminal enterprises on the planet.

It could be argued that 1995 saw Scorsese at the absolute top of his game. Sure, he might have had bigger budgets and better Box Office success later and, yes, both Raging Bull and - notably - the underrated The Last Temptation of Christ wielded more of that raw energy and passion that defined his earlier works, but Casino was the last classic era Scorsese production, and displayed a culmination of everything he had learned and refined along the way.

In some ways it could be regarded as a more polished Goodfellas, but it's so much more than just that. The story here was both bigger and more personal, pitching us a trio of fabulous lead characters perfectly brought to life by an equally at-the-top-of-his-game De Niro (in his last of a whopping eight collaborations with Scorsese), a dangerously volatile Pesci (his psycho Nicky could easily wipe the floor with his Goodfellas' Tommy, John Wick-style, with nothing more than a pen), and an Oscar-nominated Sharon Stone (impressive work considering she was - and in some ways still is - riding in the shadow of 1992's Basic Instinct), and some of the finest cinematography, editing, scoring and sheer direction seen in Scorese's entire filmography. And thus, arguably, in the history of cinema.


Casino was the last classic era Scorsese production, and displayed a culmination of everything he had learned and refined along the way

De Niro too had had some masterpieces across the decades - like The Deer Hunter and Once Upon a Time in America - but his greatest hits easily included most every collaboration with Scorsese (Mean Streets, Taxi Driver, Raging Bull, Goodfellas), and come 1995 and his final Scorsese collaboration, he too managed to bring everything he had learned over the decades to bear here. Indeed, 1995 was easily the master actor's greatest year in film, with Michael Man's equally masterful crime epic Heat and Scorsese's Casino marking a tremendous De Niro double-bill to see, the experience of which will likely never be topped. Here, his Sam "Ace" Rothstein is fabulously realised, with De Niro utterly invested in this similarly consummate professional character ("I want an equal amount of blueberries in each muffin!") whose own personal rise and fall mirrors the similar plight of mob-ruled Vegas, and thus provides the perfect personal guide to invest you in this story.

Vegas has never been as stunningly captured as this, with Scorsese revelling as much in the intricacies of casino workings, gambling and cheating (there's hints of Color of Money here), as he does in the mob minutiae going on in the background, and making every single minute of the near three hour runtime count, gripping you right from the explosive outset, through the energetic intro, the hilarious - and brutal - flashback to the old days, the cementing of Ace's position, the eye-catching appearance of Stone's "socialite" and the arrival Pesci's vicious mob enforcer - taking you on a whirlwind journey of highs and lows; marriages and bloody, brutal deaths (the pen, the vice, the bat) and trips to the desert where the bodies are buried, and reminding you with every passing moment that this is an assured and veritable master work by a director and cast at the absolute top of their game.

Embracing the period vibe, Casino was arguably the last Scorsese film to have that classical look, with softer focus, diffuse lighting and a rich aura that could have easily left it sitting comfortably as a native 70s classic, rather than a product of 1995 cinematography. A decade later, his Aviator would have some of this (from the same DOP) but dialled down nonetheless, and the decadently glamorous style here can be quite jarring for those used to precision-engineered crystal-clear digital cinematography. Despite this, it's a remarkably textured image, at once clean (yes, there's a hint of DNR at work here - there almost always is - but fine grain is still present and correct) and also superbly nuanced. The abundant reflections are better realised; the freeze-frame shots of Ace watching over the casino are stunning, facial nuances are present and correct - but for where they're clearly trying to age/de-age the cast - and costumes are lovingly intricate. This is about as precise as Casino was ever going to look without sharpening tools being cracked out to utterly obliterate the director's intended style.

Of course, you won't really care about any of that anyway because right from the opening credits sequence - indeed right from the menu! - the WCG and HDR implementation is going to blow your mind, bringing such a rich and vibrant Vegas to life that you're immediately transported right back into this glamorous world, as if the entire movie has a new lease of life and you're watching it for the very first time. The Ace/Nicky ride down the Strip, with the lights reflecting off the windscreen; almost every shot in and out of the Tangiers - it's jaw dropping eye candy, the colours rendered like never before, and black levels will make you wonder where the aspect ratio borders have gone on your TV (see: the Vegas aerial shot at night). This excellent native 4K presentation will have you not merely retiring the old SDR Blu-ray but putting it out of its misery.

Casino also earns a superb upgrade in the audio department, with a 3D object-based high definition immersive audio track in the flavour of DTS:X which fabulously refines the original mix for a more engulfing experience that, as with the video, will hit your right from the opening title sequence.


Casino also earns a superb upgrade in the audio department

Dialogue is keenly prioritised, with an elevated channel for De Niro's narration, and clear and coherent dissemination throughout, whilst effects are wonderfully observed, bringing the inner workings of these lavish casinos to stunning life. Money-bill-counting machines whirr, slot machines warble, dice roll and land, roulette wheels spin, whilst planes scream to life and car engines roar. The violence is more in-your-face than ever, from the bone-shattering whack of the hammer to the dull thuds of the baseball bats, whilst the vice scene affords that horrific squelching even beyond the crunching of the skull. Gunshots are thunderous, and LFE gets a look-in for much of it. It's the superb, almost entirely song-based score that defines the soundtrack, however, with literally dozens of iconic numbers perfectly chosen for each specific scene, given priority across the proceedings and making for an even more memorable aural experience.

With superb native 4K video and immersive audio, the only disappointment comes in the same meagre extras package as before, still residing on the accompanying Blu-ray

1995 was a high point for both De Niro and Scorsese, and Casino is a crime masterpiece which has arguably been even better regarded as the years have passed, earning itself a suitably stunning native 4K presentation and immersive audio track, and whilst the extras remain disappointingly unchanged this is still an absolute must-have 4K release.