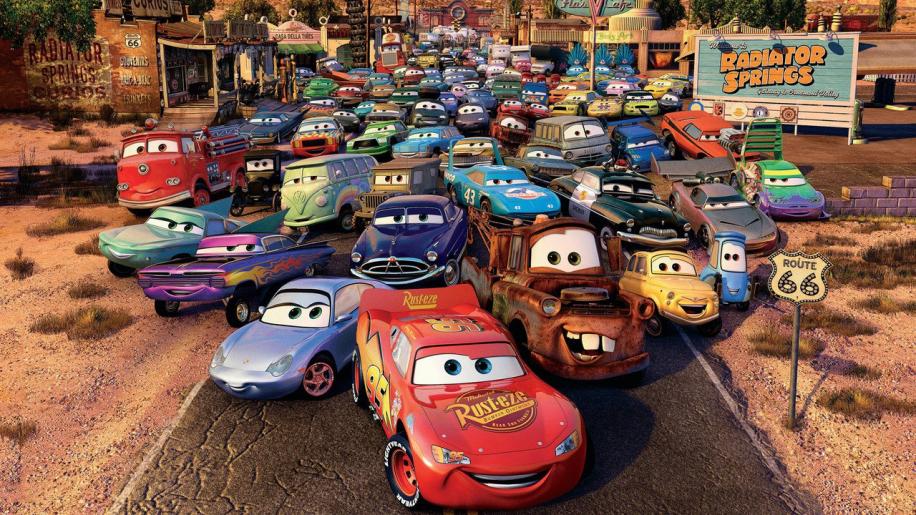 Pixar's movies have always looked amazing on DVD, and Cars is no exception - in fact, this may be their finest release to date. Put quite simply, the transfer here is literally gob-smacking. The anamorphic 2.39:1 image is overwhelmingly crammed with detail - vast racetracks brimming with crowds and flashing photography, intricate landscapes and densely populated scenes of bright and wild activity - and feels gloriously wide. The picture is a constant swirl of beautiful, eye-blistering CG vistas that never fail to take the breath away. I seriously doubted that Pixar's rendering of the jungle island in The Incredibles could be bettered - it was so lush, detailed and deep - but just look at the deserts, highways and mountain ranges that they have come up with this time. Freeze the image at any moment and the view revealed is fascinating, complex and captivating. The hues for the skies blending into the deserts is superlative - from hazy pinks, through the sun-filtered light blues to the deep azure of a cloudless canopy, on to the neon-dripping kaleidoscope of the night that sweeps over Radiator Springs.

The colours will blow you away. The primaries are blindingly bold and vivid, literally spilling from the screen with a radiance that just brings a big grin to your face. And for all the brash depth of such colours, there is only the absolute minimum of bleed - in fact, to be honest, I'm probably just searching for something negative to say and only just imagined it. For a pure demo of what Cars is capable of delivering, the first ten minutes packs in just about everything Pixar has learned thus far and really pushes the boundary of CG animation. Just look at the gleaming chrome and the fantastic realism of the reflections off the car metal. And there is zero shimmer on any of these intricate details, like the grills on the cars, or their racing patterns, which could have been affected by the frequent fast motion There is poetry at work here, folks. Even if the film was thoroughly lousy, it would serve as therapeutic eye-candy unlike, say, Polar Express or Monster House, which both had a degree of creepiness to them. There are moments here when awesome photo-realism is achieved. The scene when McQueen returns to re-surfacing the road as dusk begins to fall is a subtle work of sheer excellence - look at how the shadows and the sky appear totally naturalistic, the lighting is that good. Shots of the vehicles moving along the freeway at night look so completely real, too, that is a shock to return to the cartoon-eyed characters again.

Folks, no matter how good hi-definition is, it is really hard for me imagine how Cars could look any better than this. A stunning visual transfer that is virtually flawless.

Well, although the sound is excellent, the DD 5.1 EX track on offer seems, to me at any rate, as though it is holding something back. There is oodles of atmospheric steerage, a pounding and insistent score and plenty of zip-along, roaring engine action ... but it all sounds too, well, tame. Mind you, I've encountered this problem on a good few animation classics over the last couple of years, or so. It is sort of as though the studio has purposely toned the aggression of their tracks down a notch or two so as not to blow out the ear-drums of their core audience.

That said, though, there is still a great deal to savour with Cars' audio performance. The dynamics are strong, with great separation and depth, and directionality that is well-utilised with fiercely gunned engines, screeching tyres, voices barking out from every corner and a soundscape of densely active hubbub emanating from the full set-up. There are a couple of big booming moments that rush around the room, offering delicious sonic sweeps front to back and vice versa, and the aural effects are often quite ingenious.

A DD 2-channel mix is also available on the disc which has a meaty and well-produced design that spreads warmly across the front speakers.

This is where it gets really disappointing, folks. When you consider the lavish treatment that the likes of Monsters Inc, Finding Nemo and, of course, the magnificent The Incredibles received, the lacklustre single disc adopted here immediately gives cause for concern.

What we do have, besides the excellent shorts, One Man Band, which accompanied the film upon its theatrical run, and Mater And The Ghostlight, which sees the loveable old rust-bucket getting his spooky comeuppance after playing a few pranks on his chums, a featurette, a selection of Deleted Scenes and the full version of the fun and games that plays alongside the end credits under the title of Epilogue.

The Deleted Scenes have a Play All option and run for roughly ten minutes. These take the form of early sketches, which have been very loosely animated (more like frame-by-frame fits and starts) and capped off with real sound effects and character voices. Only the first one, which details the original manner in which McQueen loses Mac and winds up adrift in the wilderness of the desert, is really any good. At least it features a less troublesome means for their separation than the irresponsible joyrider approach seen in the finished film. The other scenes feature a ghostly vehicle graveyard that McQueen stumbles into, a bizarre dream sequence that sees our hero's engine being transplanted into a wheezy old asphalt spreader and a romantic trip down memory lane for Ramone.

The featurette is entitled Inspiration For Cars, and runs for 16 mins. Although this shows some real footage of actual Nascar racing - which is nice to see just how accurate the animators managed to get it - and a reveals just how, and why, John Lasseter chose to make the film (something to do with a much-needed family sabbatical that took the Lasseters on a cross-country road trip), this piece is really a factual epitaph for the real towns that suffered the loss of Route 66. Along the way we meet lots of colourful road-siders and travellers as the pre-production crew travel along the famous road under the tutelage of tunesmith, and Route 66 aficionado, Michael Wallis, who also voices the police car, Sheriff. Flimsy, daft and irreverent, this little feature may be interesting, but it is no substitute for a proper making of. However, as part of a much bigger, and more comprehensive package, this would still be a nice addition.

We also get a couple of sneak peaks for next year's Ratatouille (which suffers a woefully boring trailer) and Meet The Robinsons (which, although I'd never heard of it before, looked pretty darned entertaining).

Basically, this is just a filler package, folks - and not a very rewarding one, to be honest. The points it gains here are simply for the inclusion of the two fantastic shorts.

It is inevitable, if a little unfair, to judge Cars against its much-loved predecessors. Having raised their own bar to almost stratospheric heights, Pixar were always going to run the risk of causing disappointment with a film that deliberately went against their own trusted template. But if you lower your expectations a little - and, believe me, I'm in two minds about using that phrase - and view the film as the whimsical western ode it really is at heart, then you can't go wrong.

AV-wise, Cars more than delivers the goods. The image is utterly breathtaking, proving that there is life in standard DVD yet. The sound, whilst a fun-packed aural romp in its own right, still feels under-cranked but, nevertheless, provides some fancy whiplash effects along the way. As far as extras go, this release is considerably sub-par, and a major disappointment. A clutch of Deleted Scenes and a couple of very brief featurettes wouldn't fill a glove compartment. Obviously, there will be another edition along at some point. But, even so, Cars comes very highly recommended. So, go on, jump in and take it for a spin.