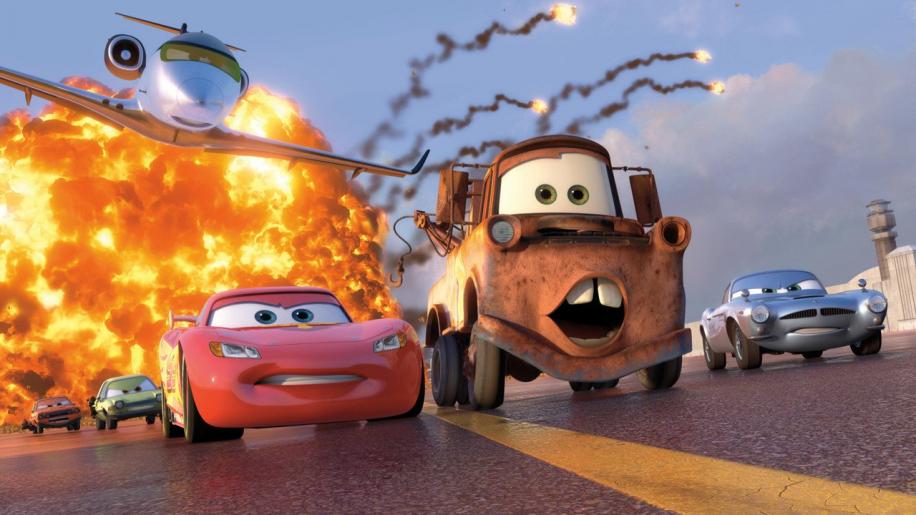 In commercial terms, Pixar have never had a box office failure. Even the lesser cannons in their arsenal, such as A Bugs Life, recouped well over their production costs in their initial theatrical run. The same is true for tonight’s feature which, whilst critically lambasted, has still managed to make more than double is initial budget costs in the worldwide market; it seems no matter what they do, Pixar have the golden touch. However, a succession of ‘Cars 2’ type critical nightmares might start to erode their crown because we all know the cinema going public is a fickle crowd, one whiff of defeat and the tide will swiftly turn. But for now, Pixar can do no wrong, they have embraced the latest 3D technology and, for my money, have produced the best looking 3D picture to date; though no amount of eye candy can hide a weak story, and unfortunately Cars 2 suffers accordingly. So start up your engines and let’s put the pedal to the metal in Pixar’s latest speed-fest.

When I originally saw Cars, I didn’t initially warm to it. The story of a self centred race car that learned humility and how that to drive faster sometimes you need to slow down, didn’t grow on me until my second viewing (and I haven’t looked back since); it was then I began to appreciate what the story was trying to say, and how the different threads all wove together to make a very satisfying whole. Of all the characters, the one that I never really warmed to, at all, was Mater. The rusting tow truck whose hick town vernacular and simplistic view on life made him the ideal ‘sidekick’, however; a perfect foil for Lightning’s drive-hard/drive-fast attitude and as a team the pair worked really well. (He also had the best line in the film, “He did what in his cup?”) And of all the relationships forged in Radiator Springs his and Lightning’s was plainly that of ‘best friend’ and, I guess, on that level it works fine. No hidden depths necessary. Come the (second) opening of the sequel, Lightning is now a four time winner of the Piston Cup (setting this film four years after the original) and in that time his and Mater’s friendship has remained on exactly the same footing – best friends, at home when fooling around. Mater is clearly still smitten with Lightning, he races with his charge in tow, at full pelt, to greet his friend upon his return and this is followed by a succession of ‘pranks’ that the two get up to – in a very similar fashion to those depicted in their first night out together. While this succession of scenes are meant to show how the two cars are still best friends and remind us of the original film, there is also that nagging doubt that we’ve seen this all before, and when you realise that, then the character of Mater is stuck as the one dimensional entity he was portrayed as previously. And this becomes a difficult hurdle to get over since this second film puts Mater as the lead – and there is crux of my problem with this film: even though I can see the joke, or what the makers were trying to achieve, at the end of the day there is still an annoying character in the lead; imagine Jar Jar taking the lead in Star Wars ... oh wait, you don’t have to, it's been done in (far too) many episodes of The Clone Wars.

The actual opening of the film introduces us to a whole new character, that of Finn McMissile, an Austin DB5 lookalike, which is a dead giveaway as to his profession, that of an international spy and British agent in the ‘James Bond’ mould. He is voiced by Michael Caine, himself once portraying a Bondian type anti-agent in the guise of Harry Palmer in the sublime Ipcress Files. Caine voices McMissile with only the kind of authority that he can, i.e. sounds exactly like Sir Mike, a hard edge but with that butter smooth undertone to spread the warmth when needed. His introduction deals with the main plot of the film, all about alternative fuel and a devious plan to discredit it, allowing the ‘lemons’, old ‘Russian’ type cars that have a reputation for falling apart, to take over the world with their discovery of the largest oil field on the planet. And this theme plays out in a kind of espionage/whodunit to the backdrop of the World Grand Prix, a race organised to promote said alternative fuel.

Our main characters become embroiled in the race when Mater tries to defend Lightning against a boastful Formula One styled car called Francesco Bernoulli on a live TV show. John Turturro gives the voice of Francesco just enough character to keep him on this side of irritating; pushing the Italian accent to the limits but reining in the over-the-top nature making him a worthy rival to Lightning. He doesn't quite have the rough and ready gruffness of Chick Hicks, but he displays greater wit and has greater skill on the circuit; therefore he is not as instantly dislikeable and thus makes him somewhat enigmatic.

The rest of the Radiator Springs crowd get to have a few minutes worth of screen time and all are voiced by their respective talents returning from the original film. I’d have liked to have seen a little more from Sally with regard her fondness for Francesco’s ‘open wheels’ and Lightning’s jealousy of it, but there simply isn’t enough time in the script for such indulgences. Once we get to the races the script takes a tri-polar route, that of the racing rivalry, the discovery of the car behind the alternative fuel plot and, the main thrust, that of Mater’s unwitting involvement in the spy world. The main idea behind the film was conceived when director John Lasseter was promoting Cars around the world, “Mater driving around exotic locations becoming confused” – flimsy, you’ll agree, but not without its charm since it’s been established that Mater has that type of character; though it’d best work as a short no? Instead, the globetrotting idea was broadened to include the ‘World Grand Prix’, though the world is Tokyo, Italy and England, it is still broad enough to open up the film beyond the outback of America. And since the ‘World Grand Prix’ is not enough, as the idea behind rivalry having already being explored in the original film, the world of espionage was opted for (from a dropped idea in the original story), followed by placing Mater in a true ‘fish out of water’ scenario and this is possibly the most extreme - make no mistake, folks, the entire structure of the film revolves around this one idea, everything else, including what should have been one hell of an emotional core, that of Mater and Lightning’s break up and reconciliation, and Mater’s realisation of his behaviour causing havoc, are merely tacked on asides. Really this is where the film loses its way; there is so much going on, and so much that could be expanded upon, but the reliance on situation comedy of a fool in an out of place situation simply feels old hat and below Pixar. The aforementioned emotional aspects are core values that have been explored in their top tier films, all the Toy Story’s for example, even the original Cars had it, but here, in the sequel, it’s glossed over to such an extent that is appears out of place. And it must be the first time that Pixar have made such a mistake, and as such, for me, put this film as their weakest so far.

And that is a shame, because there is much to praise. All the characters, save that of Doc Hudson due to Paul Newman’s death, make a welcome return, though their screen time may be limited, thanks to the familiarity from the original film it is great to see them all again, voiced by their respective talents. There is a seamless introduction to a whole host of new characters, and each give a terrific performance. Story segments are all very well crafted and interweave to give a complex but nevertheless easy-to-follow story that combines friendship, espionage and comedy. And the film looks truly amazing, both in its 2D and more especially its 3D guise.

When you listen to the commentaries and view the features on the bonus disc you really get a feel for how developed and integrated the story threads are, and how passionate the makers were to make the best film they could – being new and inventive, but still remain incorporated in the Cars Universe. And whilst you have to agree that that is true, the finished product is still little more than one of Mater’s Tall Tales; a glorified short that has been bloated to feature length run time; despite the numerous ‘realisations’ that occur, there is no true emotional depth, so whilst it is an enjoyable watch and a fun sequel, it is not a particularly good film, and when compared to Pixar’s own catalogue this makes it stand out like a sore thumb.