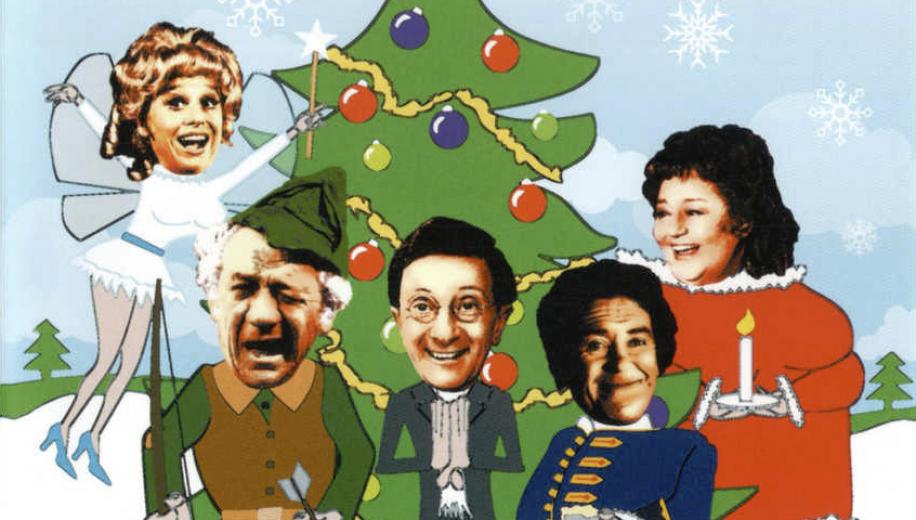 Carry On movies are largely an acquired taste and I never acquired that taste for them. Still, their bawdy humour and double entendres have guaranteed a large cult following that gives them some considerable worth. Over the course of nearly four decades, some thirty-odd Carry On movies were produced, along with numerous TV-movies as well. Some of them are standalone efforts that fans adore (like Carry On Up The Khyber), others are disappointing even to hardcore followers (like Carry On Emmanuelle). The TV movies tended to fall into the latter category, although it is noteworthy that these particular Carry On TV movies - the four Christmas Specials - have not all been released before on DVD, so collectors will be eager to find out if they are any good.

Carry On Christmas, made in 1969, is the first movie in the collection. Based loosely on the classic Dickens' tale A Christmas Carol, it sees Carry On regular Sid James' Ebenezer Scrooge facing his own demons, which come in the form of the like of Dracula, Frankenstein (Dr. Frank N Stein) and even Cinderella. It is likely to be regarded as one of the more 'important' TV efforts, not least because of Sid James' solid lead performance, but also because of the presence of Bernard Bresslaw, Peter Butterworth, Terry Scott, Hattie Jacques, Charles Hawtrey, Barbara Windsor and the legendary Frankie Howard (in a scene-stealing cameo as a fairy godmother). There's no Kenneth Williams (in fact he is not in any of these movies) but few fans will fail to appreciate all of the other memorable Carry On performances on display here.

Carry On Christmas - Carry On Long-John is a 1970 black and white effort (the only one of the four that is not colour) based loosely on Treasure Island. Again, because of the concept, most of the production is largely pantomime in style and we get Sid James once more in the lead as Long John Silver, with Barbara Windsor playing the young boy, Jim Hawkins. All of the requisite Carry On members are present and correct, along with Kenneth Connor and Wendy Richard in a dual role (although Kenneth Williams is still notably absent). One of the stronger titles in this particular collection.

Carry On Christmas - Carry On Stuffing is basically a sketch-based production made in 1972, with the team taking on the story of Aladdin - another pantomime, singing a bawdy Elizabethan song and having fun in the Garden of Eden, although this time the distinct lack of all the main players make the show fall apart. No Sid James, no Kenneth Williams, no Frankie Howard and no Charles Hawtrey. Barbara Windsor is there and, along with Kenneth Connor, she takes the main stage and there are some other familiar faces to back them up, but this is definitely the weakest of the selection.Carry On Christmas, the 1974 collection, is another sketch-based special with various scenes including Robin Hood, cavemen, another Elizabethan effort and a scene in the War. Sid James is back, interrupting each scene with his grumpy shopping store Father Christmas, Barbara Windsor gets down to her knickers in almost every scene and most of the usual crew are present in correct in the far better out of the two sketch-based productions.