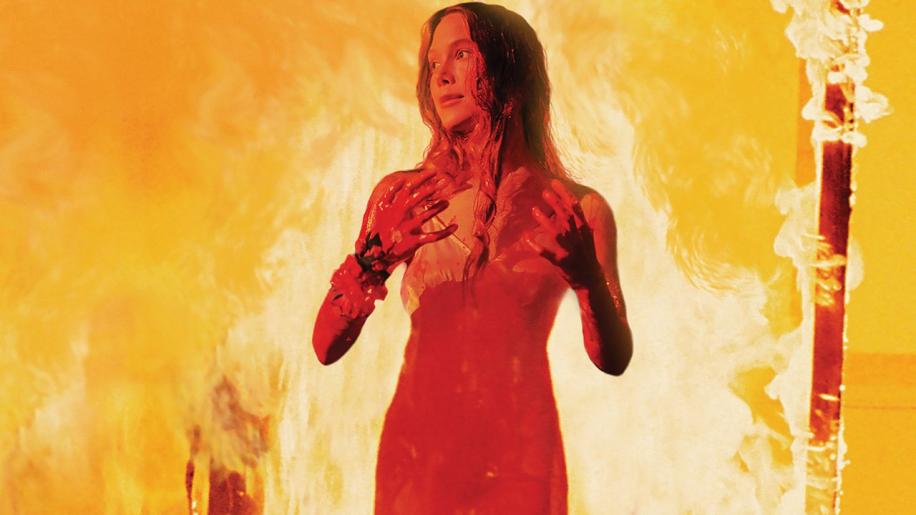 Brian DePalma had a fair few films under his belt before Carrie came to our screens in 1976 but nothing previously prepared film fans for what we were about to see. The viewing public had recently experienced The Exorcist, Texas Chainsaw Massacre and just prior The Omen so they were used to having a little more depth to their horror flicks, a little more substance and films which were a lot more disturbing than their earlier counterparts. The final scenes of Carrie are so important when discussing this film so if you have not yet seen it please advance to the technical sections of this review.

Carrie White (Sissy Spacek) is a shy, naïve teenager in her last year of high school, she's ridiculed by her classmates (and to some degree by her teachers) and treated with brutal disdain by her fanatically religious zealot of a mother (Piper Laurie). When she starts menstruating for the first time in the showers after gym she thinks she is dying, her mother not having told her the facts of life. Attempts by her teacher Miss Collins (Betty Buckley) to calm her result in Carrie discovering a new found trait, by only using her thoughts and her mind she explodes a near by light bulb.

Carrie returns home, confronts her mother about why she was not told of her natural development as a young woman and ultimately comes to realise that she can take more control of her life, she needn't be subjugated to the ritual beatings or incarcerations her mother inflicts upon her. It's time to go out, meet friends, go to the prom. Her classmates though feel this is the ideal opportunity for them to yet again ridicule Carrie, to take revenge for the detention they had to face for their earlier indiscretion.

The opening scenes of Carrie are very disturbing indeed, the slow motion shots of her in the shower, initially voyeuristic become quite brutal as we understand that Carrie has not had a 'normal' upbringing and at this late stage in her development does not know about her own body. She's degraded by her classmates and this is indeed a very difficult scene to watch, you have pity for Carrie knowing that ultimately this is not her fault; that blame rests with her mother, Margaret. We finally understand why; her mother is an icon from the middle ages honestly believing that Carrie has only now started her period because she has been sinning against the Lord.

From that moment the film seems to settle down somewhat into a standard teenage flick, where one such individual (Carrie in this instance) slowly emerges into the butterfly from the caterpillar she has been all of her life, becoming the swan from the ugly duckling. There are brief references to the new found telekinesis skills she has discovered and during such scenes the background score heightens the sense of foreboding but nothing can prepare you for the destruction and mayhem which she will ultimately unleash. During the middle part of the film it becomes a basic affair and at times you wonder if it in fact a horror that you are watching. All of the horror so far coming from Carrie's initial treatment by her friends and her mother and not what the viewer was expecting from the cinema posters.

It is the third and final act though that the cinema going public had been waiting for and when finally presented on screen, no matter what had gone before, this was the pay off. The earlier acts almost lulls the viewer into a sense of false security. Carrie, again humiliated, snaps and wastes bare all before her, even those few people she had regarded as friends. Using her new found powers she's able to seek revenge on those people who in their own small way sought their own revenge on her. Like Carrie, DePalma takes no prisoners in these final blood red bathed scenes, the slow motion introduction superbly heightening the tension, the use of split screen showing Carrie's own facial state at that time not realising right from wrong, friend from foe. There are acts of brutality which the cinema going public up to that time had not experienced before, or certainly not to this degree. A carnage of epic proportions it's just a small shame that it wasn't carried out to the same extent it was in Stephen King's original novel. But even through all of this mayhem, instigated by Carrie herself, you still feel pity for her, even though she is the perpetrator of these wilful acts of death and destruction you still feel she is the one harmed; it's not her fault. Without the earlier sections of the film introducing us to Carrie as an inexperienced young woman we would never have felt this and to that degree DePalma has to take credit for almost hoodwinking the viewer into thinking they are watching a film from a different genre.

So Carrie for me and for many others ultimately put DePalma firmly on the map. From here he would go onto direct some firm favourites, Scarface, that amazing opening from Snake Eyes and even to some degree The Untouchables but nothing he did before or since really matches up to the level of coiled tension he unleashes here in that final act; he starts off his film with blood and he certainly finishes with copious amounts of it. He employed a cast which many will recognise, and not just John Travolta before he went onto start in Saturday Night Fever and of course Grease. Most would go onto star in television although Nancy Allen would grace our screens in further DePalma ventures but most would probably remember her best as Officer Anne Lewis from Robocop.

It is Sissy Spacek and Piper Laurie though who have to take credit for the majority of this film's impact, without them it might have faltered somewhat; it is their developed, rounded roles and performances that add considerable weight to this film. Spacek is well cast as the young blossoming woman with no confidence, shying away from peoples eyes and hopefully thoughts, at times she and her character remind me of Mia Farrow and Rosemary Woodhouse from Rosemary's Baby. Spacek is brilliantly paired with Piper Laurie playing Carrie's mother. Not having played a role for some 12 years previously Laurie showed us here why she took the Oscar for her role in The Hustler. She comes across as an almost demonic figure, with her self induced sexual frustrations and evangelical beliefs, depositing all of her own failings and fears upon her daughter. It's her mother who is the monster in this film, not Carrie. Both actresses were nominated that year for Oscars, Spacek in the Leading Role, Piper Supporting and both really did deserve that credit, only being beaten by Faye Dunaway and Beatrice Straight for their performances in Network. My own opinion is that the wrong pair won.

Carrie paid homage to that earlier horror/thriller Pyscho as can be seen, or rather heard, when Carrie's powers are let loose. Those sounds now so indellibly etched on our minds when Janet Leigh met her demise in the shower are reproduced here and with great effect. So Carrie followed in the footsteps of the new wave of 70s horror and along with Halloween pushed it to another level, brought it home to a teenage cinema going public. It's not a perfect film by any stretch of the imagination, but then which DePalma venture is, but it deserves its place in cinema history and certainly a place on your BluRay shelves.