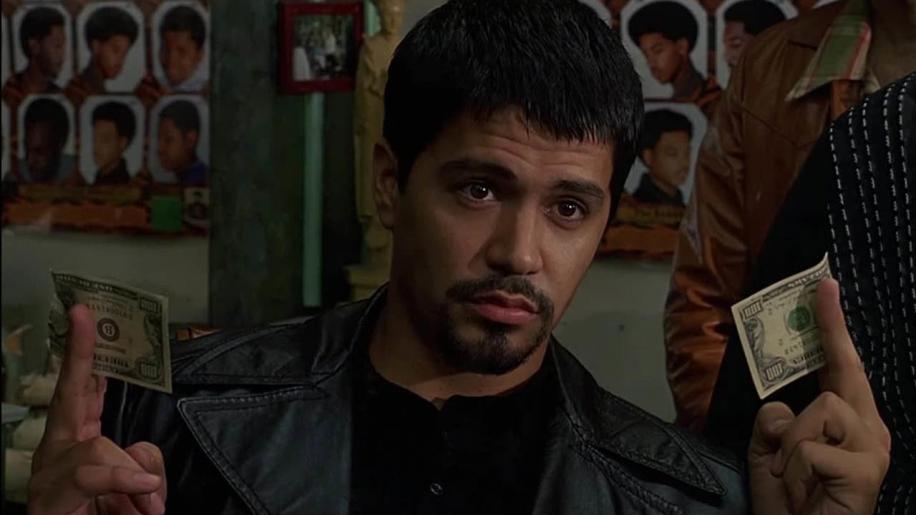 Carlito's Way: Rise to Power is given a basic 1.85:1 aspect ratio anamorphically enhanced widescreen transfer that promotes it with average detail, good clarity, little softness, no noticeable edge enhancement and little grain (except where intended). The scope looks little better than a TV-movie and the direction leaves a lot to be desired, but the transfer only presents what was filmed and cannot really be faulted for that. The colour scheme is reasonably fresh in most scenes - particularly for the skin tones - but otherwise the look is slightly faded, probably to suit the era. Black are fairly solid, allowing for reasonable shadowing and the transfer exhibits no print damage whatsoever. Carlito's Way: Rise to Power is presented with a solid if uneventful Dolby Digital 5.1 track that does what it needs to do. The dialogue is slightly muffled - you have to turn it up quite loudly to hear them speak clearly - and the effects are few and far between (with a couple of gunfight but little else effects and a little ambient noise but nothing significant or atmospheric). There is a decent soundtrack that is pretty reminiscent of Shaft and its boisterous predominance of the speakers marks the most significant part of a largely lacklustre effort. There is also a DTS mix but, to be honest, it does little to improve on the average Dolby track. For a direct-to-DVD release, there are a fair few of interesting extras to complement the main movie. First up we get seven minutes of deleted scenes, with more of the black and white credits footage (which sets the scene and has another actor playing an even younger Carlito), more of the gang in jail from the beginning of the movie, too much extra footage of Hollywood Nicky being a supercilious idiot and a little bit more of the lovely Leticia, a brief addition to Carlito's monologue musings and more from the hard-nosed cops who are on his tail. None of them really needed to be in the movie, but for a production like this they should have probably been left it (that is, apart from all the scenes involving Hollywood Nicky).

The Gag Reel is six minutes long and comes across as slightly incongruous with the feel of the movie (I am not entirely sure they should have included it). Most of the mistakes are line-fluffs or actors who are unprofessionally unable to keep a straight face, but there are a couple of nice extra moments with Luis Guzman (in scenes that were neither in the final film nor included in the deleted scenes) improvising excellently.

Got Your Back: Carlito's Brothers in Crime is a six-minute look behind the scenes at this Carlito's Way prequel. Jaclyn DeSantis (Leticia) pops up to talk about the boundaries within New York back in those days and we get plenty of b-roll footage and other cast and crew interviews. Unfortunately this short featurette is simply packed full of footage from the final film itself, padding it out and making it seem slightly too promotional. There is no need for them to explain the whole damn movie to me - I've just watched it and even if I hadn't, I wouldn't want to know so many spoilers - and expecting anything more deep than a face-value explanation of the story is too much to ask for in the short duration.

Bringing the 'Hood to Life is an eight-minute look at shooting this prequel, talking about the original movie, the fact that they got to shoot in Harlem and the basis in reality that the story has. The cast and crew discuss their own memories of the sixties, the clothing, the cars, the way the streets were run and so forth - and how they brought it all back to life in this movie and overall this is a much more interesting behind the scenes featurette. One glimpse of a clapper-board reveals the fact that, during the production, the project was under the working title of Carlito's Way: The Beginning, which was obviously dropped in favour of Rise to Power.

There is also a twelve-minute Making-Of Documentary that takes a more in depth look at the whole production. Unfortunately we're back to having far too much footage from the main film itself which is a shame after the last featurette. Still, there are a few nice interview soundbites and some interesting background footage. It's just a shame that they pad out five-minutes' worth of this new material with the same again of footage from the final film.

The Set Tour with 'Earl' takes us behind the scenes with the great Mario Van Peebles for a brief, four-minute look at some of the sequences being shot. He takes us through the setting, the filming and the fashion, proudly showing off his own attire. Although very short and not particularly informative, it is nice to spend more time with this quality actor.

We also get Trailers for this movie, the new Ultimate Edition Carlito's Way DVD and - rather out of place here - the average horror Skeleton Key. Carlito's Way is a vastly superior gangster movie that did not deserve to be disrespected in this kind of way. If a prequel were to be made, it should have been made by a better cast and shot by a better director. As is, for a b-movie DTV release it is quite a solid, watchable but unexceptional gangster thriller that will keep you entertained for the duration. Just don't expect to see more of the Pacino Carlito that we all know and love. Presentation-wise the video is fairly decent, the audio does what it needs to and there are a surprising amount of extras for such a low-budget production. Fans of the original could consider a rental to see whether or not they fancy adding it to their collection but newcomers should check out the superior Pacino/De Palma movie first before going near this.