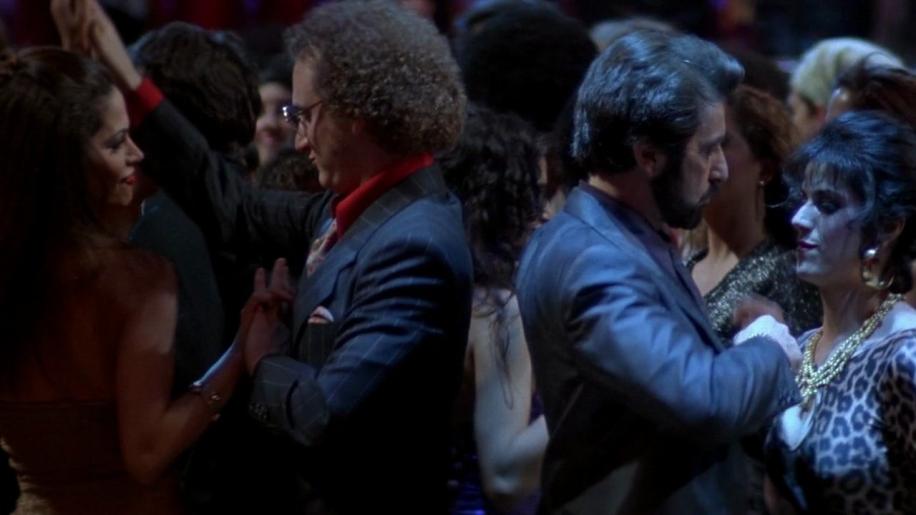 “Never give up your friends, no matter what.”

Al Pacino ranks as simply one of the finest actors on the planet. His film résumé speaks for itself, rivalling even method master Robert De Niro with numerous classic productions under his belt - from the Godfather trilogy to Scarface, Serpico and Scent of a Woman. Arguably having less range than De Niro (some say he gets a little too 'shouty' for his own good) I am seldom disappointed by his movies (which, these days is not the case with De Niro). The reality, though, is that they both probably reached their final peak nearly a decade ago with their awesome collaboration on Michael Mann's superior crime thriller, Heat. A few years earlier, however, Pacino reunited with Brian 'Scarface' De Palma for Carlito's Way.

“Look at me. Completely rehabilitated, reinvigorated, reassimilated and finally gonna' be relocated.”

Carlito Brigante is a reformed criminal. After serving his time running the gangs and then in prison, he is freed on a technicality by his weasely lawyer and finally allowed to go back to the streets he grew up on. Right from the start Carlito is determined to go straight. He wants to pick up the money due to him and retire to run a car rental service in the Bahamas. He has given up the life of crime. Unfortunately Carlito was a major league player when he went away, so everybody - from the upcoming street punks to the organised crime bosses - expects him to return to work as usual. Even his ex-girlfriend, who he is hoping to take to the Bahamas with him, does not think he can keep his hands clean. With the D.A. trying to entrap him and even his coke-snorting lawyer determined to lure Carlito back to the seedy side of life, the more he tries to fight it the more it seems inevitable.

Carlito's Way ranks as one of my favourite movies of all time (and is a strong contender for my top Pacino flick). It has a solid story based on the novel 'After Hours' by Edwin Torres. This was the second of two books about the character, Carlito Brigante, but in order to avoid confusion with Martin Scorsese's After Hours, director Brian De Palma opted to name his movie after the first book by Torres, Carlito's Way. De Palma has seldom had such fantastic material to work with but it is made doubly special when he works his magic. Rotating camera angles, cleverly spliced flashbacks, Scorsese-like continuous tracking shots and tour de force set-pieces (including a classic billiard-ball shootout and a tremendous Grand Central station finale that even topped De Palma's similar Untouchables train station climax) - it's all here for your viewing pleasure.

Despite the fact that an unnecessary prequel has just been released (Carlito's Way - Rise to Power), I have always regarded the other De Palma / Pacino collaboration Scarface as being an ideal companion piece. One tells the story of a man climbing his way up through the ranks to become a key organised crime player whereas the other looks at a man who has already made it to the top of his game, now desperately trying to escape the death-dealing that is associated with it. Despite their significant differences in terms of morality, there are major parallels between Carlito and Scarface's Tony Montana and De Palma takes great care in paying homage to his previous work without rehashing it - the 'here come the pain' scene where Pacino bluffs his way out of a confrontation with a lot of shouting and an empty gun echoes the climactic 'say hello to my little friend' Scarface battle, reminding you of what Carlito's earlier life was like. (Carlito even gives his club the same name as the stall Tony Montana ran in Scarface)

“You look at my hands. Now if you make me raise my voice again, I'll snap your neck like a breadstick.”

Pacino is at the top of his game, having shown his mettle as a mafia-man in numerous movies over the decades, although none quite as tortured as Carlito Brigante. You really feel for him, wanting him to shrug off the demons from his past but, at the same time, revelling in the moments when his former life shines through the cracks in his older, wiser veneer. Pacino simply is Carlito (and it pains me to think of somebody replacing him in the new prequel) but there are plenty of other big names who do their job just as well. An almost unrecognisable Sean Penn is on top form as Carlito's slimy lawyer, David Kleinfeld. Penn used to be one of those Hollywood bad boys, heading in the direction of Mickey Rourke when it came to trying to 'fight the system' but, just like Rourke, he has enjoyed quite an interesting comeback over the last few years with powerhouse Oscar-winning movies being churned out (Mystic River, 21 Grams) alongside solid thrillers like The Interpreter and The Assassination of Richard Nixon. Back in the nineties, when Penn wasn't really doing anything of value, he begrudgingly took on this role in Carlito's Way to pay for a film that he wanted to direct (the excellent Jack Nicholson drama, The Crossing Guard). None of that shows - all we get is fantastic lesson in talent and method-acting, with Penn pulling off one of his most convincing roles ever.

“Favour gonna kill you faster than a bullet.”

A young John Leguizamo makes an early appearance as a new, upcoming but still small-time hood called Benny Blanco, who thinks he is the rightful successor to Carlito's reign, Luis Guzman is on dangerously wild form as Carlito's right-hand man and old street enforcer, Pachanga (although he rather oddly appears as a different character in the prequel) and it is also worth noting a brief appearance by Viggo Mortensen (who, thanks to Lord of the Rings, is finally getting roles that he deserves like A History of Violence) as another 'friend' of Carlito's from the old days, Lalin. Surrounded by backstabbers who either want to prosper from his reputation or see him back behind bars (or worse) there is one shining light in his life and that is Gail, the love of his life. It was vital that they get the casting for this one right and Penelope Ann Miller does a great job in the role, exuding all of the passion, sexuality and vitality of a young Nicole Kidman, without being in the slightest bit aloof (which Kidman proved she was guilty of in The Interpreter). Penelope Ann Miller has never really shined as much as she did here as Gail, being lumbered with lacklustre b-moves like The Relic and The Phantom ever since.

Carlito's Way is a showcase of talented filmmakers working at the peak of their game, with keen direction, excellent acting, a moving orchestral score, a taut story and a punchy script. Thrilling from start to finish it is simply superb on every level and comes highly recommended. It is a must-have for absolutely every film-lover's collection.