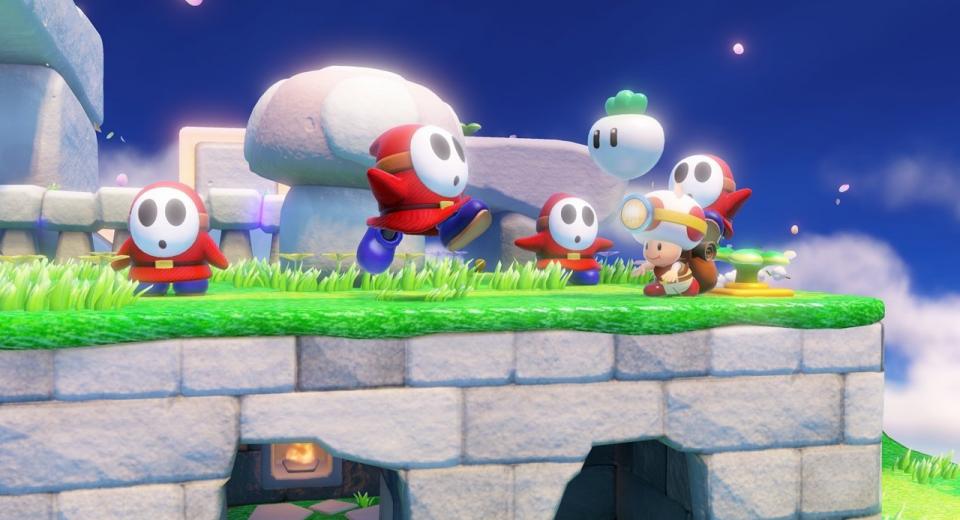 A lower priced game which receives a "soft" release that breaks the official street date may not sound like something to get excited about, but give Captain Toad another look and you'll find a real gem.

In amongst all the fantastic platforming fun of Super Mario 3D World there was the unmistakable kernel of a game yet to be. The few Captain Toad levels could easily have been little more than a spurious addition, intended to add variety and break up the platforming. But there was a reason they were held as one of the best parts of an already superlative Nintendo package.

The twist, in sharp contrast to the leaping and power-ups of Mario’s athletic gameplay, was that Toad could not jump. He was rooted to the floor, and would have to navigate the cube like levels by forward planning of when - and how - to ascend or descend to a different plane in order to reach his goal.

Each stage was a miniature puzzle box, and the emphasis was on moving around the square design, in a Fez fashion, and manipulating the camera angle so as to give you the best view of any potential M.C. Escher-like optical illusions.

Unsurprisingly, that inventive concept is easily expanded into a full game in the shape of Captain Toad: Treasure Tracker, which matches the quality of the taster found in SM3DW, expanding on it in certain areas, and adding some more ideas along the way.

Yet, even in the most experimental levels, the core remains the same, reaching the Star and possibly finding three Super Gems along the way. There’s a little damsel in distress type story that equates to what’s been propelling Mario in his Bowser battle for decades, but beyond the quality of the cut-scenes - which are well rendered and suitably colourful - there’s little to enthuse about. In truth, Toad doesn’t need a narrative any more than any other anthropomorphic mushroom with a flashlight on his head. What people who played SM3DW wanted was more; more levels, more use of the GamePad and more puzzling moments, and that’s what Treasure tracker serves up, albeit in differing ratios.


More levels, more use of the GamePad and more puzzling moments

It largely plays out like a huge expansion pack, as that’s what it is in essence, often relying on taking ideas that were already established and repeating them in a larger quantity. But that’s no bad thing. The beauty of the gameplay is its simplicity, at its very heart it’s a collection of mini gameplay hooks that wouldn’t sustain a full title on their own, but collectively they combine to keep your interest. Variety abounds, with the selection of levels orchestrated to flow like a fine tuned album: start well, don’t put two similar tracks next to one another and save your best till last.

A game for all ages As with many modern Nintendo titles, the difficulty curve is initially shallow, taking quite a while to ramp up, and the concessions to accessibility has neutered a few potentially great early levels, taking away any real sense of satisfaction upon completion.

The hand holding prompts that cover parts of the screen could really do with an option to turn them off as well; accessibility’s fine, but you need to be able to strive for a harder, and less sign-posted path. With that in mind, the designers have slotted in additional things for you to find and do, in the form of an extra challenge per level. These can range from the seemingly straightforward - such as finding the Golden Mushroom - to the trickier, like taking no damage or only using a certain move a select amount of times.

These constraints spice things up, and will certainly help to keep adults interested whilst they make their way through the early levels. It's in the latter game that the ease of attaining these extra criteria becomes taxing. Invisible pull patches that hide Gold Mushrooms are a particularly devilish trick, the only hint as to their location being signalled by the vibration of the GamePad; no easy feat to pick up if you’re in a level that has moving platforms that are causing the controller to intermittently rumble.

Speaking of the GamePad, its use is central to the inventive / gimmick ratio that may divide opinion, but it should at least be applauded as it’s a rare case where the second screen actually does something of worth. As a motion controller, it moves the camera angle, which sadly isn't merely optional; there's no point lining up the perfect angle if a minor reposition in the seat will alter it, no matter how smoothly it handles when you want it to.

The touch screen isn't just shoehorned in for beginners to tap enemies to stun them, or highlight invisible coins. You actually need it, to move blocks and turn wheels, and handily your finger prod is shown on the TV, so if for some reason you can't focus on two screens in quick succession you at least have a chance.

The most eye-catching use of the tablet controller however is as an aiming device for firing a turnip cannon from the first person perspective. In conjunction with a mine cart run, it’s certainly a striking inclusion that has that “just one more go” factor, even if it has to be supplemented with a little thumbstick work so you can get at least a reasonable panoramic view without swivelling your neck like an owl. Boss battles are present, but in lieu of a jump ability the attacks coming your way have had to be well telegraphed, and as such they’re a little mundane. The lack of a timer to make you move from behind cover means that the patterns can be watched for some time, usually from a spot of complete safety.

If anything, they’re bookends to give the rest of the game some perceived context and narrative when in all honesty it needs none. The boss levels are one attack concept used for a solitary stage, whereas the rest of the game is enchanting because it builds on lots of smaller, novel ideas that aren’t so focussed on what your environment can do to you, but rather how you’ll manipulate the environment. Once you get to the final Chapter, the ability to reach many Super Gems becomes linked to the correct use of a power-up, like the Super Pickaxe which smashes blocks, meaning you'll need numerous attempts for full completion.


It builds on lots of smaller, novel ideas

It’s ideas layered upon ideas, emphasising the journey from A to B rather than the style of how you get there as in Mario, with little touches that start to make a tiny Rubik’s Cube of a stage seem slightly more complex with each progression. Like putting Bill Blasters on movable blocks, or splitting a level where you have to grab a Double Cherry and take two Toads on alternate routes; it’s all about the variety building upon itself until you spend more time spinning the camera and planning your next more than actually moving.

It may play out a bit like a thank you to fans of Captain Toad’s inclusion in SM3DW, but that’s all it ever needed to be. The final example being the additional levels from Mario’s last outing, but this time redesigned for Toad’s traversal, with ladders and the like placed to make up for his lack of jumping skills. It’s strange to tackle a stage where you know every hop skip and jump, but have to approach it in an altogether more pacifistic mindset to Goomba squashing. Strange, but fun.

Captain Toad: Treasure Tracker is unashamedly simplistic in its early stages and aims to be as accessible as possible. This may lead to some older players feeling untaxed and less than satisfied with their initial puzzle-based treasure hunting. However, as the levels start doubling - and tripling - up on the gameplay mechanics necessary, and grow in size, the complexity does so also, particularly in the additional criteria needed for full completion, which is where much of the real challenge lies.

It won’t be to everyone’s tastes, but the market for this game was clear from the outset, with the type of package it is being adequately reflected in its lower price. It’s a large expansion of a small concept, adding scale, quantity and variety.

There's no common thread -like you'd find in a Mario title's World progression - but by its very design it doesn't need to avoid being disjointed; it's a collection of bite-size fun puzzle platform levels, polished to a high standard and oh so easy to pick up and play. In short, it’s more Captain Toad levels, and that’s all any fans of his appearance in Super Mario 3D World - myself included - really wanted.