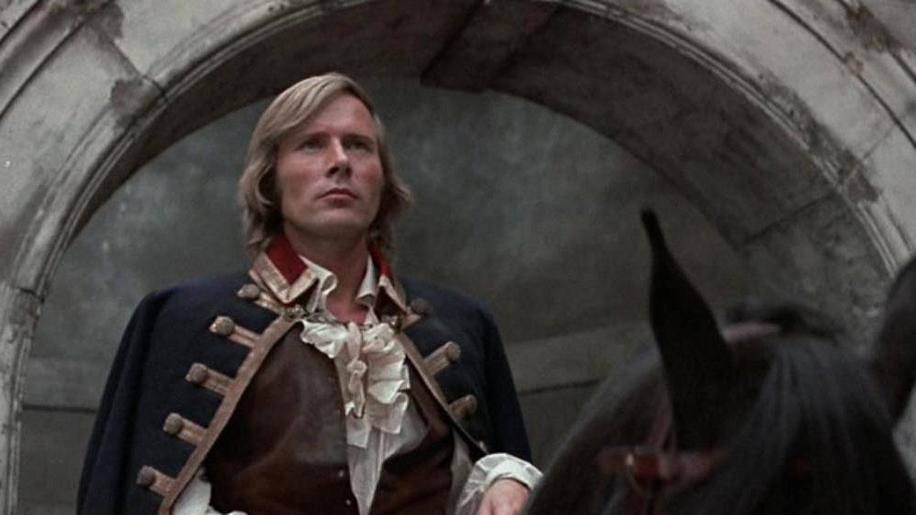 Captain Kronos comes with what is supposed to be an anamorphic 1.85:1 image that, despite having been severely cropped down either side, is still fairly rewarding to view for the most part. Grain, dust and damage have been virtually eliminated, except for a few wayward dancing vertical lines that stand out only because the print, otherwise, is exceptionally clean and clear. Detail is wonderful. Close-ups captivate, with eyes, teeth and skin bright and radiant. Distant objects are also pretty well reproduced with figures moving through the trees or along far away slopes with clarity and good definition. Contrast levels are similarly splendid, with copious deep black shadows stretching across the screen, a warmth from candle-light and from blazing fires and a nicely held and realistic variety of hues to the many daylight sequences.

The print, itself, is robust and steady, without much in the way of flickering or wobbles. Colour is well balanced, although the palette is much more subdued and autumnal than most of Hammer's fare and there is not much in the way of blood to splash gaudily about the picture. Some of the exterior shots, out in the woods, seem to suffer from a softer middle-ground section - which is particularly evident in the scene when Grost and Kronos interview their first actual eye-witness to a slaying. The foreground appears quite sharp and detailed, as do the trees and the movements in the background, but the people sitting talking in the middle of it all appear much softer and less well-defined than their surroundings. However, this is not a major discrepancy in the transfer. Edge enhancement, sadly, is a much greater distraction - although only on figures and objects that are well-lit or seen in silhouette. Presented with a DD 2-channel mono track, Kronos has an understandably limited presence. However, the score is delivered with warmth and vigour, bursting from the speakers with a rousing strength to add to the spirited atmosphere. The dialogue is clear and never muffled, although the dubbing is out on more lips than just Horst Janson's on a couple of occasions. The effects - swords clanging, carriages racing, church bells ringing and doors being flung open - all possess a nice degree of weight and the overall impression is of a rich and full-bodied soundtrack that copes well with a film from the early seventies. Although equipped with an excellent little booklet compiled by film historians Marcus Hearn and Jonathan Rigby, along the lines of similar production notes for The Abominable Snowman, The Quatermass Xperiment, Quatermass 2 and X-The Unknown, Captain Kronos is severely underfed in the extras department. We have a trailer and a rather lousy featurette called Vamps On Film. Running for around half and hour this fluff-filler is narrated by Hammer's only werewolf, Oliver Reed, and is clearly taken from some vintage VHS source. Badly put-together and filled-to-brimming with clips that give altogether too much away from their respective films, this is deplorable stuff. To be honest, I have yet to sit through the entire thing - and, in fact, probably never will.

The R1 disc apparently has a commentary track featuring Brian Clemens and Caroline Munro and it is a serious lapse on my part not to have secured a copy of it for myself yet. One day, though, I'll pick this up ... just to hear Caroline Munro's recollections of rolling in the hay with Horst Janson. For now, the best addition to this release is obviously the booklet, which is packed with information about the production, the cast and the makers, and entertainingly written. With some nice stills and a selection of rare posters for the film, this is a brief but interesting companion-piece. The featurette may be pure tat, but the film gets a definite thumbs-up from me, folks. Captain Kronos was a brave move for Hammer and one that didn't pay off. Brian Clemens went back to what he knew best and Hammer, well ... Hammer just faded away into ignominy, overtaken by time and taste. Kronos, however, lives on. And, as the meaning of his name suggests, he may have his time once again. The possibilities are endless. There is ripe scope for a remake, or just another adventure.

The disc does a very good job of reproducing the film - barring those little wayward flickering lines - and, with the excellent booklet that accompanies it, I can only recommend Captain Kronos wholeheartedly. Though, I'd probably opt for the R1 edition, if I were you.