The best non-Avengers entry in the entire Marvel Cinematic Universe 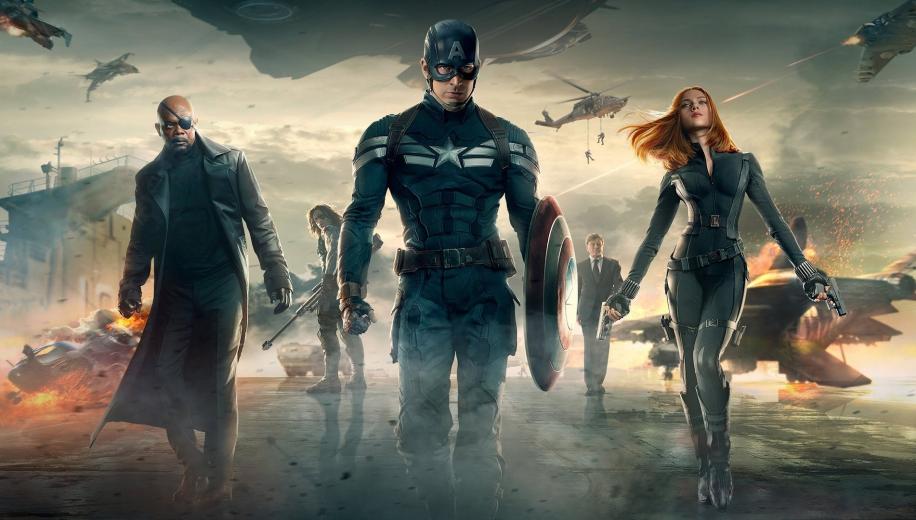 Winter Soldier not only turned Cap into a serious player, but also changed the whole MCU landscape, defying its comic-book genre to become a memorable conspiracy thriller in its own right.

Whilst Phase 1 was about the origins of the core Avengers, Phase 2 was where they really started to have some fun and mix things up, with Winter Soldier a game-changing political conspiracy action-thriller which tore S.H.I.E.L.D. apart and left far-reaching ramifications across the entire Marvel Cinematic Universe.

Arguably taking its cues more from Bourne than from its superhero blockbuster predecessors, this superior sequel delivers on all counts; seamlessly blending the narrative of the source Winter Soldier comic book with the core structure of the Robert Redford classic Three Days of the Condor, perfectly developing its hitherto underwritten key characters (Nick Fury, Black Widow and Cap himself) and giving them each defining moments that standout across the entire franchise; offering up a quintet of exceptionally-staged action sequences and topping it all off with a supremely oppressive, immersive score.


Breathlessly entertaining, The Winter Soldier thunders from one brutal set piece to the next with relentless determination and undeniable foreboding

Nobody was safe in this relentlessly intense tale, which accelerates from 0-100 in a heartbeat and then simply never lets its foot off the pedal. The Bourne Supremacy-flavoured ambush on Sam Jackson’s Nick Fury; Chris Evans' '12-on-Cap' elevator scene; and the entire bridge attack sequence, where Scarlett Johansson’s Black Widow finally comes into her own and where the street shootout turns into something from Heat, blended with hand-to-hand combat and knife fighting like something out of The Raid (or, since it's Kali knife fighting, perhaps Under Siege or The Hunted) - they are all contenders for the best scenes not only in the movie, but in the Marvel series up until that point. It's not just the excellent screenplay or the masterful action direction which define the piece – nor even the welcome character developments along the way – but also the superior score that enhances the suspense and drives home the dark tone throughout, reminding us at every stage in the piece that there's nowhere to run, nowhere to escape, and nobody to trust.

Breathlessly entertaining, The Winter Soldier thunders from one brutal set piece to the next with relentless determination and undeniable foreboding. There's a reason why the Russo Brothers landed all of the biggest, best and most important gigs in the MCU - including Civil War, Infinity War and Endgame - and that reason is Captain America: The Winter Soldier.

Captain America: The Winter Soldier comes to UK Ultra HD Blu-ray courtesy of Disney, offered up with all of the inherent technical limitations of a 2K Digital Intermediate, but looking pretty impressive nonetheless.

Winter Soldier always looked very good even on its initial Blu-ray release, here stepping up to the plate in the wake of the largely excellent jobs done for the Avengers Trilogy 4K set and delivering a strong 4K presentation. Sure, it's not perfect, but some of the issues within were more to do with stylistic choices (Cap has always been a little 'softer' visually in this than any of the other characters - likely due to the fact that he needed to look like a perfect super-soldier superhero specimen who had not aged since his plunge through the ice) and do not appear to be indicative of a problem across the whole presentation. For comparison, the detail on Fury's face shows up very nicely indeed (including the scar which he got 'the last time he trusted someone' - now a throwback line which definitely wasn't made good on in Captain Marvel), whilst the CG-expanded landscapes are utterly stunning - check out that lift ride down into where they are prepping all the helicarriers and the detail on each dropship. There are also a couple of fabulous reflection shots, with Fury and also Redford standing in their respective offices, poised against the window; the images looking impressive enough to make for character posters.

And even if some complain that it's not a consistently striking uptick in detail, the WCG and HDR add some fantastically vibrant tones to the feature, most gloriously realised in everything from the tiniest of elements - the head up display in Fury's car; the oversight committee holos - to the grandstanding helicarrier effects with the vast galleons booming cannon at one another a visual tapestry of opulent explosive delights. Black levels are rich and strong, affording a backbone to the darker sequences and, overall, it's a very nice, and oftentimes demo, video presentation.

More important for many will be the state of play on the aural front, and thankfully Disney are slowly edging their way out of their now informally trademarked Atmouse soundtracks (even if Winter Soldier was never a prime offender on Blu-ray with a stomping reference DTS-HD MA 7.1 mix; the woes didn't really start to hit home until Age of Ultron era), and offering up a suitably oppressive and veritably demo Dolby Atmos upgrade here.

Dialogue remains well-prioritised, coming across clearly and coherently throughout, but it's the score and effects which standout here. The slew of memorable action sequences - opening assault on the ship, Fury ambush, Cap's escape, the bridge assault, and the entire last half hour - are all defined by thunderous gunfights (moreso than any other one of the Marvel entries thus far - this is easily the most adult chapter) and brutal fights that, as aforementioned, have more in common with Bourne or, in the case of the street shootouts, Heat, than they do with superhero fare. The attack on Fury is a thrumming with intensity, and the bridge assault only tops this, although the consistent galleon broadsides in the final setpiece really threaten to take the roof down. The score is also a contender for the best score to any of the Marvel entries - unsurprisingly - and builds a staggering amount of tension in all the key sequences, delivering heightened threat with every beat, carrying LFE weight with it.

It's hard to match this up with something like, say, the recently released Aquaman or, even more potently, the stunning Atmos track to Spider-Man: Into the Spider-Verse. If that's Atmos perfection, then Winter Soldier, however impressive it is, and however much it improves upon other Marvel Atmos tracks, isn't quite as jaw-dropping.

The same selection of extras, with nothing ported to the 4K disc

The Winter Soldier 4K package offers up the same healthy selection of extra features that adorned the original Blu-ray release, though with nothing ported over to the 4K Ultra HD Blu-ray disc itself. The Russo Brothers headline an informative Audio Commentary which offers insight into the inspiration behind the story, founded in 70s conspiracy thrillers, and the characterisation and setpieces. A couple of small Featurettes, a handful of Deleted and Extended Scenes, an alternate look at Captain America's Notebook across different territories, and a Gag Reel round out the disc. There's a reason why the Russo Brothers landed all of the biggest, best and most important gigs in the MCU and that reason is Captain America: The Winter Soldier

Although Iron Man 3 darkened up the tone of the MCU previously, Thor: The Dark World was a miserable failure by comparison, with Winter Soldier proving the real game-changer, the repercussions from which were felt across almost every film since, right up until Infinity War. It's a phenomenal piece - where were the Oscar committee members who decided to champion Black Panther when this was released? - and, aside from Infinity War (which arguably is incomplete without the final chapter), a contender for the best entry in this entire universe.

Disney's 4K release of Captain America: The Winter Soldier delivers excellent video and a strong Dolby Atmos mix (which is a relief considering Disney's history with Atmouse tracks). All previous extras are present and correct on the adjoining Blu-ray, and the film is available in the UK as part of the Captain America Trilogy Boxset, following hot on the heels of the Avengers Trilogy Boxset, and preceding the release of Endgame. It's a must-have release that comes highly recommended.