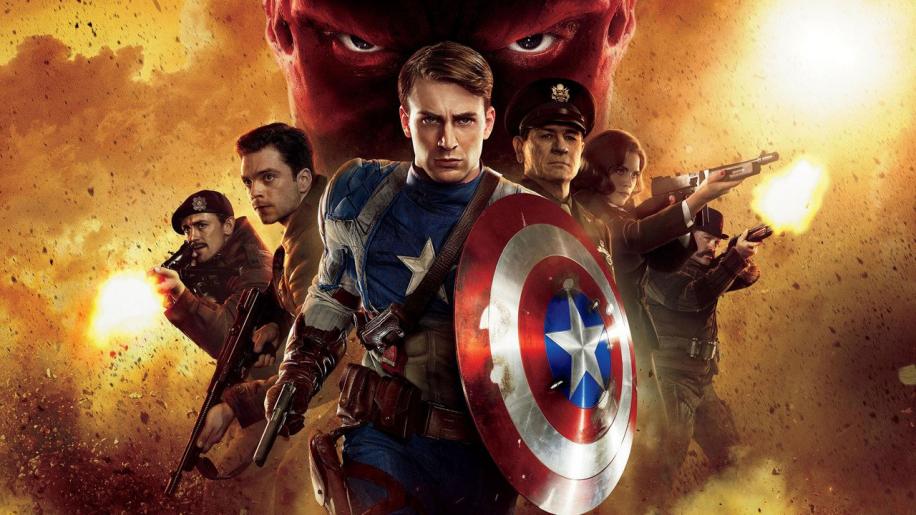 Coming off the back of the turgid mass that is the Green Lantern, I find myself enthralled and captivated by Marvel’s latest superhero effort, in what should be a clichéd ridden basic story, but which actually turns out to be rip roaring fun, and goes to show how a good script that pays homage to its origins can turn out when respect is given to both the source and the audience in equal measure. Tonight’s feature, ladies and gentlemen is Captain America: The First Avenger.

As is customary with the first film about a superhero we have an origin story and the film spends a great deal of time promoting the character of Steve Rogers, who will eventually become Captain America. Chris Evans took on the role, having worked with Marvel before as the Human Torch in the Fantastic Four films, after reportedly turning it down three times. His performance is extremely measured and as nearly half the runtime is concerned with Rogers before the operation to turn him ‘super’ we really get to understand what makes the man tick. Rogers is a kind man, sickly, weak and short, but with the heart of a lion – willing to stand up to bullies and take a beating, if need be, for the sake of justice and ‘right’; he wants nothing more than to enlist, but not to ‘kill Hitler’, in fact not to ‘kill anybody’ but because he ‘hates bullets’ and detests the killing and wishes to help his fellow American in their time of need. He is shown to be inventive, smart and courageous in the boot camp, but also timid and shy in his liaisons with the fairer sex – this is no mighty hero, this is a man who seeks justice and wants the means to do so. Evans plays this ‘skinny Steve’ extremely well; there is none of the bravado or cock sure attitude of his previous characters, it is replaced with genuine warmth of character that endears him to us. The formula he receives to transform him into the ‘super soldier’ does not diminish these traits, on the contrary it amplifies them, but also gives him the brawn to back up his convictions; thus when he dives head first into muck and bullets we, as well as his friends and comrades, are right there with him. This is a hero, not the bulk, speed and power, but the man behind it all, willing to sacrifice all for the right cause.

Directing duties are with Joe Johnston whose eye for period detail and panache for ‘Saturday morning serial’ adventure is exactly what the film needs to set it apart from its peers, even those in its own Marvel stable. Captain America was born in the bloody conflict of the Second World War and the film spends the majority of its run time in and around these events; but with a skilful diversion once Rogers has received the serum that turns him into the super soldier, despite its success, the powers that be don’t see him as an asset and consign him to the propaganda machine and this, in a weird twist of fate, is what inspired the titular name, costume and iconic shield. Dressed as an American ‘flag’ sporting a shield to defend the nations values and assigned a rank to lead the nation forward, this segment of the film is tinged with pathos, black humour and more than a grain of truth (look at how real soldiers were treated in Eastwood harrowing Flags of our Fathers). And it is not until Rogers faces a defeated army platoon that he realises his folly and that he is missing his calling as their justifiable anger inspires him to take on the impossible mission to rescue his fellow men and more especially his friend and companion, Bucky.

It is during this daring rescue mission that a number of things occur; most significantly Rogers comes face to face with his nemesis and near equal in stature, Johann Schmidt, or more infamously known as the Red Skull played with fervent ferocity by Hugo Weaving. Schmidt was the very first recipient of the super serum invented by Dr. Abraham Erskine who were both, at the time, working in Germany before the rise of Hitler’s Third Reich. Erskine was forced to inject the unstable isotope into Schmidt and whilst it worked it also had some serious side effects, and fearing repercussion fled to America to resume his work and perfect the technique – and not just the serum, the recipient was also considered – as the injection not only amplifies physicality, but also mental capacity and personality traits. Erskine is played by Stanley Tucci who imbues the character with a kind, grandfather warmth; a man whose sole purpose is to aid the war effort in choosing the right person to receive the formula and he sees beyond the body and into the mind; his selection of Rogers is based on his ‘good’ heart and it proves to be the correct. Weaving on the other hand plays Schmidt with relish, a soft German accent hiding a menacing insanity that drives all megalomaniacs. The formula has expedited Schmidt’s mania, strength and ambition beyond all reason, and his discovery of the ancient magical object the Tesseract, gives him the ability to put his plans into action. (I also like the fact that they tap into the myth that Hitler was actively seeking out ancient occult/or otherwise artefacts in much the same way as Raider of the Lost Ark did, a film that this action/adventure owes more than a nod of debt to). The mission also leads directly on to the narrative of the film, the destruction of Hydra’s (the clandestine group of German soldiers and scientists loyal only to Schmidt) munitions warehouses that are stockpiling the futuristic weaponry to devastate the world. But on a more personal level, the flight to the drop point sees a continuation and breakdown of the flirtation between Rogers and Peggy Carter (Hayley Atwell), an English officer with the Strategic Scientific Reserve, whose feelings for ‘skinny Steve’ boil over when he becomes the titular character.

Book ending the film we have the customary advert for Marvel’s The Avengers film, and whilst it is necessary to add that continuity, it actually devalues the film as a whole – here’s hoping that the Captain can have his own adventures as he fairs much better that way!

Much has been said about the digital shrinking of Chris Evans for the first part of the film and all of it good. Well, here on the Blu-ray it is just as astonishing, even if you look, and I did, you still cannot see the joins, it is an astonishing piece of trickery expanded upon in the commentary and its own dedicated extra feature. What makes this so believable is Evans’ portrayal of the ‘skinny’ guy, we never question his heart nor his actions; I love the scene after the transformation when Bucky laments “I’ve become just like you” as he is ignored by Peggy in the bar. Such comic elements are scattered throughout the run time and Johnston keeps the film moving at just the right pace – slow enough for us to enjoy the characters, get to know and understand their motivations, but quick enough to keep the action coming. It really is like a ‘Saturday morning serial’ with action, adventure, romance stitched together with a comedic nature and the ever threat of global domination. The balance is well struck and the narrative never dips, Captain America is the First Avenger and his place in history is assured.