First and foremost an origin story 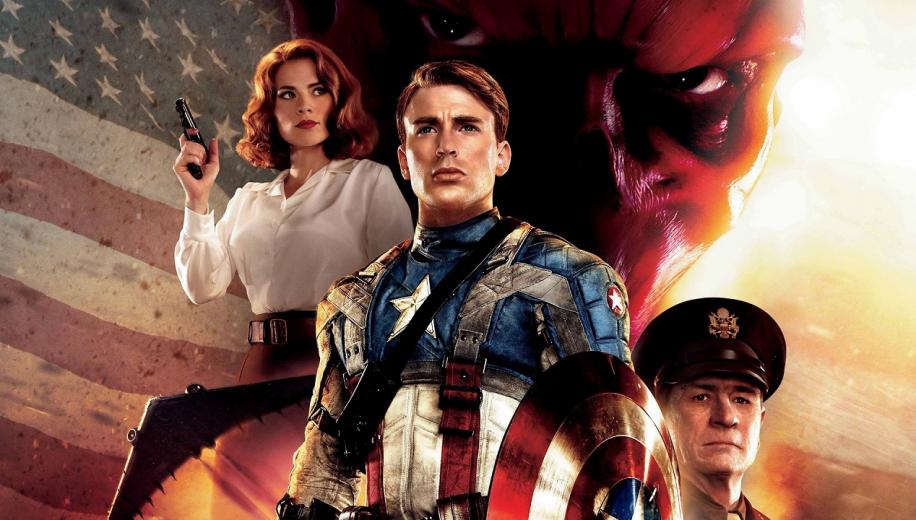 Captain America! How exciting! I'm a great fan of your films!

The little guy, with a big heart, standing up for what he believes is right is quite literally who Captain America is. Steve Rogers is a 7 stone weakling, but wants to fight for his country, to be someone who can be counted on and has the determination to see it through. Unfortunately, he can’t get in as his ailments and stature see him being denied time and again, that is until he is given the opportunity to become a ‘super soldier’, taking a top secret formula to develop his physical attributes; strength, speed and agility that turns him into the fabled superhero and one to lead not only his own band of men to secure victory, but eventually the Avengers themselves.

The First Avenger is an origin story, of both the titular character and the Avengers, for without one, you cannot have the other. As a film, it is somewhat ordinary, hitting all the right beats to tell its story, and indeed is surprisingly heartfelt at times (the relationship with Peggy) but its mainstay is as a stepping stone to bigger and better things. And whilst the MCU would go on to much bigger things, the Captain America parts of it contain some pivotal aspects, with its Winter Soldier proving to be one of the best films in the whole of the MCU.

It is easy to pitch TFA as the inferior brother, but there has to be a start somewhere, and seen as an allegory for Rogers himself, the first film has the heart to carry it through. Captain America TFA was shot digitally using a combination of Arri Alexa, Arriflex 235 and Arriflex 435 cameras with a resolutions of up to 2K and finished as a 2K DI which has been used for this Ultra HD Blu-ray release. The disc presents an up-scaled 3840 x 2160p resolution image in the widescreen 2.40:1 aspect ratio, and uses 10-bit video depth, a Wide Colour Gamut (WCG), High Dynamic Range (HDR), and is encoded using the HEVC (H.265) codec for HDR10. We reviewed the Region free UK Ultra HD Blu-ray release of TFA on a Panasonic 65DX902B Ultra HD 4K TV with a Panasonic DMP-UB400 Ultra HD Blu-ray player.

Shot digitally in 2011, the source resolution is, by today’s standards, low and the picture shows it. The up-scaled image is marginally sharper with some enhanced detail over the 1080 image, but overall it still appears relatively soft, even close up detail of skin texture and clothing weaves show only modest improvements. The battlefields of WWII fair well, with trees and other foliage well defined, likewise the various craft, tanks, motorbikes etc. are tight against the background.

The overall colour palette of the film is somewhat drab, earthy browns and greens and whilst the HDR and WCG do boost these to give a greater range and depth to the colours, the artistic intent remains intact; i.e. it is still pretty drab. Cap's uniform is suitably bold, the red white and blue being strong and defiant, and likewise, the various Hydra enhanced weaponry holds strong blues. Oranges of explosions seem somewhat tame though, not the eye scorching hotness one might expect, the standoff over the retreating bridge in the warehouse seems a bit flat – still better than the 1080 image, obviously.

Black levels are pretty good, there is a reasonable depth to the frame, and shadows are extended, while the white end of the scale manages to push the image out: highlights, weapon fire and sparks are wonderfully bright.

Digitally, there are no issues and the source is pristine. The English Dolby Atmos track is also a nice improvement, opening up the soundscape to include some decent three-dimensionality. The overhead channels are used sparingly but to good effect during the action scenes, with explosions and gunfire ringing all around. The surrounds add bulk to the effects and give some good ambience to quieter moments: the lead up to Rogers’ enhancement in the lab is wonderfully realised. Bass is pretty good, there some decent LF effects, with the sub contributing to the low end quite nicely. The score manages to remain well mixed and well layered giving the speakers plenty to do. While dialogue is clear and prioritised to the front but given a little directionality when required. Does need a wee pump of the volume to get the best out of it, but once done it is thoroughly engaging. All the extra features are on the included Blu-ray, with nothing new or added, and are the same as have been previously available.
Audio Commentary – With director Joe Johnston, director of photography Shelly Johnson and editor Jeffrey Ford, whose informative track covers pretty much everything about the shoot, including plenty on the effects.
Marvel One-Shot: A Funny Thing Happened on the Way to Thor's Hammer
Featurettes – Seven in total, titled: Outfitting a Hero, Howling Commandos, Heightened Technology, The Transformation, Behind the Skull, Captain America's Origin, and The Assembly Begins.
Deleted Scenes – Four in total: Attack in Norway, The Battle at Azzano, Steve Rogers Gets his Medal and Steve Rogers Meets Nick Fury.
Trailers Captain America: The First Avenger is first and foremost an origin film, not only of the titular character but of the Avengers themselves. As a film, it is, compared to what is to come, rather ordinary, one might say safe, but it does what it sets out to do, placing a stepping stone of much bigger things to come, and does so with surprising gusto and a heartfelt script.

As a 4K UHD, the set from Marvel is pretty good; the picture is up-scaled to 4K and shows a modest upgrade in terms of detail, though HDR and WCG add decent depth to the stylistically drab colours, while both black and white scales are nicely improved. The Atmos track, although needing a wee volume increase, is nevertheless well prioritised, engaging with decent bass and clear dialogue. The extras are exactly the same as has been seen before. Available in a trilogy box set with Winter Soldier and Civil War.