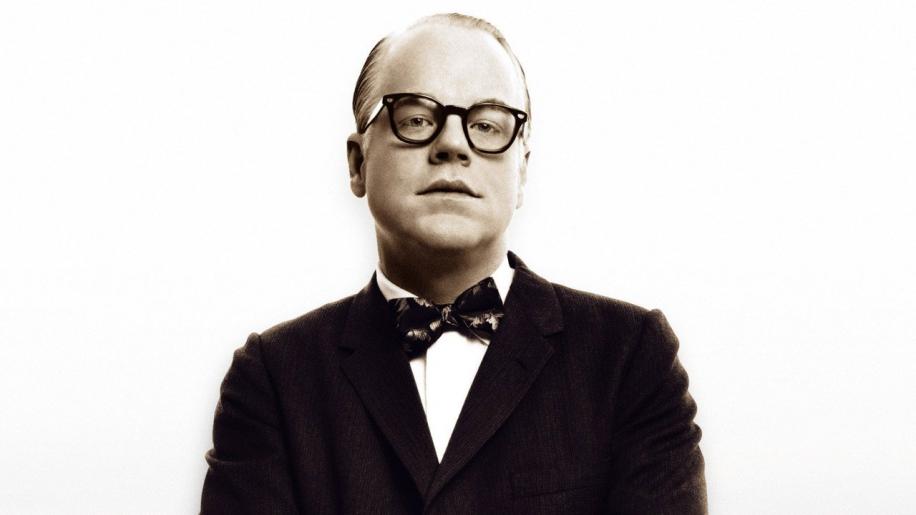 “On the night of November 14th, two men broke into a quiet farmhouse in Kansas and murdered an entire family. Why did they do that? Two worlds exist in this country: the quiet conservative life, and the life of those two men - the underbelly, the criminally violent - and those two worlds converged that bloody night.”

In the Sixties, a controversial American author who was famous for writing works on then-touchy subjects like interracial and homosexual relationships, became intrigued by the plight of one young man on death row. So captivated as he was by the true story that he conceived and published one of the first ever non-fiction novels to be seen at the time, potentially changing the future of literature. His name was Truman Capote.

The movie introduces us to Capote, painting him as an eccentric, extremely intelligent but correspondingly arrogant man who was, more often than not, the centre of attention at any of the functions that he attended. He was the proverbial life and soul of the party. With a distinctively fey voice and a very camp, effeminate demeanour, he was always the first to be noticed and had learned over the years how exactly to use that interest to his own benefit, adopting a very brave 'take me or leave me' attitude.

Riding the success of his latest published work, he notices a newspaper article about two young men who butchered an entire family in a small Kansas town and convinces his publishers to let him investigate the story further, with a view to writing a book telling their tale. When he actually does go and delve deeper by spending more time with one of the murderers in particular, he finds himself empathising with the killer much more than he had ever expected (or wanted) to.

The book research quickly becomes something of an obsession for him, spending all of his time with his newfound homicidal 'friend' without even ever putting pen to paper. His own friends and colleagues are concerned for him and how he is slowly becoming both drained and disturbed mentally. It soon becomes apparent that, even if he does manage to finish his work and have it published, he simply may never be the same again.

Capote is an extremely slow, atmospheric piece that paints a picture of a very enigmatic, popular author who finds himself greatly affected by his latest subject. Rather than play the movie out using key pivotal moments to show the historical transition that takes place, the director has chosen to fashion a much more broody, contemplative work that shows a more realistic, gradual change in the lead character as the dark subject matter that he is researching begins to affect him in unforeseen ways.

Taking on the extremely difficult title role is the highly talented character actor Philip Seymour Hoffman. He has shown the breadth of his range over the years, giving vastly different (but equally noteworthy) performances in everything he has set his mind to. He is always convincing in whatever part he adopts and held his own against DeNiro in Flawless, provided a scene-stealing cameo in Adam Sandler's remarkably thoughtful romantic drama Punch Drunk Love and was integral to the multi-faceted Magnolia. He is soon to be seen in another Cruise movie, the highly anticipated M:i-3, where I hope he brings some gravitas to a sequel that could potentially get the franchise back on track. Here his performance is one of those that makes you truly forget that he is acting and believe that he really is Truman Capote.

He is ably supported by the likes of the lovely Catherine Keener (Being John Malkovich, The Interpreter), who plays his confidante Nelle, Chris Cooper (Lone Star, The Bourne Identity) as the policeman in charge of investigation and Bruce Greenwood (Thirteen Days, The Core) as Capote's partner.

I have to say that, whilst Capote is a clever, thoughtful and correspondingly disturbing movie, which really puts you in the mind of a man who is getting too involved with a serial killer, it is not really a very enjoyable movie and a lot of this is because of the central character. Don't get me wrong - I can see precisely why Hoffman's performance has garnered so much critical acclaim - but that still does not make the movie a pleasant watch, nor his character one you are going to like. Capote is painted as desperately arrogant and fairly cold for most of the movie, only occasionally displaying moments of seemingly random humanity. I understand that this was all supposed to show the conflict inside that he is undergoing, but he is correspondingly quite hard to sympathise, let alone empathise, with. And unfortunately, for me at least, if you don't care about the lead character (whether hero or anti-hero), it is very difficult to care about the movie itself. Capote is like a brilliant piece of art which every likes to admire and appreciate in a gallery exhibition but nobody would actually want to see every day hanging on their wall.