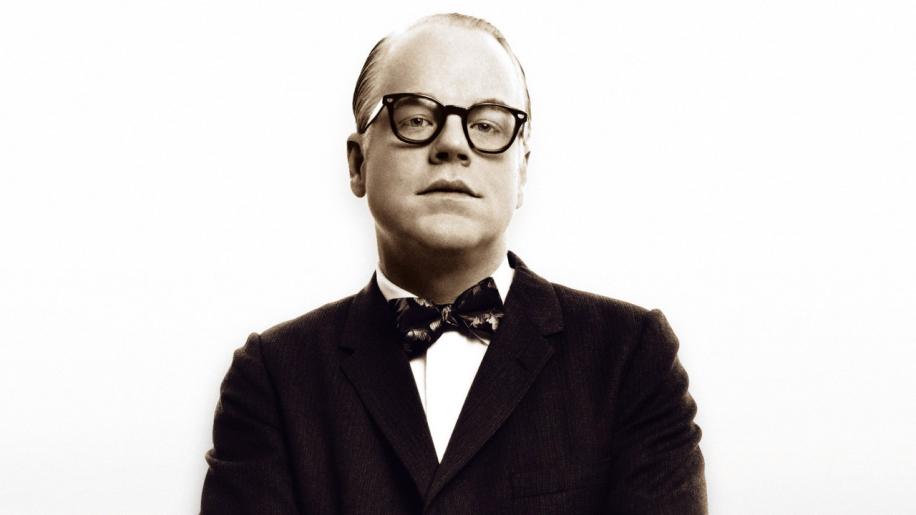 Capote is presented in a broad 2.35:1 aspect ratio anamorphically enhanced widescreen transfer. Perfectly capturing the era, we get decent detail and clarity throughout, with negligible softness but some edge enhancement and some scenes exhibiting unnecessary grain. The colour scheme really takes this movie back in time, with the bleak landscapes, grey skies and dour palette (apart from during the sunny Spanish interlude) all still being rendered accurately. Blacks are fairly solid and the transfer itself exhibits no signs of print damage whatsoever. Perhaps not as picture perfect as you would expect from such a recent production, any deficiencies only tend to add to the feel of the production.

Capote comes with a main soundtrack recorded in Dolby Digital 5.1 Surround Sound. The dialogue - even Truman's own fey mumblings - is reasonably clear, normally coherent through the proceedings but often forcing you to vary the volume level between scenes. There are very few loud effects (most notably only the four distinctive shotgun blasts), the ambient noises instead being well-observed, from passing cars to creaking floors to clapping audiences, allowing for the surrounds to put you back in the thick of things. Often you wonder whether there really is a car rumbling by behind you or it is just coming from the rears. The score is very subtle and only breaks through into a limited few of the scenes, probably kept to a minimum in order to allow the movie to have more of a documentary feel.

First up we get an Audio Commentary with the Director Bennett Miller and lead actor Philip Seymour Hoffman, who plays Capote. They immediately jump into discussing the slow pace of the movie, the contemplative images and the 'restrained score' - which I take as almost non-existent. The more dry offerings include when each scene was shot, the locations chose and the weather they got, although it is interesting to note what was improvised (many of Philip Seymour Hoffman's party pieces), what came directly from the book 'In Cold Blood' and how they developed the central character. It is a quiet, thoughtful offering that is totally in line with the pace of the movie.

The second Commentary is with the Director Bennett Miller and the Cinematographer Adam Kimmet who discuss the more technical aspects of the production, but often stray into the same topics as were covered (fairly thoroughly) on the first audio commentary. Even the new offerings only tend to involve talk about locations, houses used, shots used, costumes, period cars and period sets, which can get extremely dry and tedious after a while. There are a few nice anecdotes about on-set happenings but overall this is definitely the lesser of the two audio extras.

The 'Answered Prayers' Documentary on Truman Capote runs at nearly seven minutes in length and looks into the real Truman Capote. We get contributions from his biographer and Philip Seymour Hoffman himself (who did a great deal of research for the role) who talk at length about his personality, his behaviour and his work. There are plenty of nice stills of the real man, along with a short but interesting bit of video interview footage from him (where you really get to see just how perfect Hoffman's vocal rendition was). This is a very interesting offering for fans of the man and his work, even taking a brief look at the resultant downfall he suffered following his last book.

The Making-Of Featurette is split into two sections, totalling some thirty-five minutes of Behind the Scenes Documentary. It is fairly comprehensive, looking at the evolution of the project, with contributions from the Director, the Screenwriter, the Cinematographer and the lead, Philip Seymour Hoffman as well as co-stars Catherine Keener and Chris Cooper. They discuss the real man himself, casting him, the other characters, putting the movie together, giving it a sedate style, the end result and its authenticity. It is an interesting offering, with a few clips from the main movie but also some nice stills from the production.

Finally we get a few Previews on disc startup - Jennifer Aniston's Friends with Money and Ralph Fiennes' White Countess - along with access to these and a bunch of other Trailers from the main menu: The Memory of a Killer, Thumbsucker, Junebug, Saraband, The Passenger, Breakfast on Pluto, Where the Truth was, The Patriot: Extended Cut, The Dying Ground and the excellent new Tommy Lee Jones modern-day western, The Three Burials of Melquiades Estrada.

Capote is a well-filmed, superbly-acted documentary-style drama whose subject-matter unfortunately makes it very difficult to enjoy and correspondingly difficult to like. Slow, contemplative and unsettling, it revolves around a character who is complex and interesting but not in the least bit likeable or able to be related to, a serious problem for a central character. So although I can see why Hoffman got the award for this movie, I cannot recommend it as a movie anybody is likely to actually enjoy a great deal. This release has correspondingly solid video and audio, with a some decent extras to round off the disc, but it is still most likely to be popular with true fans of the real Capote.