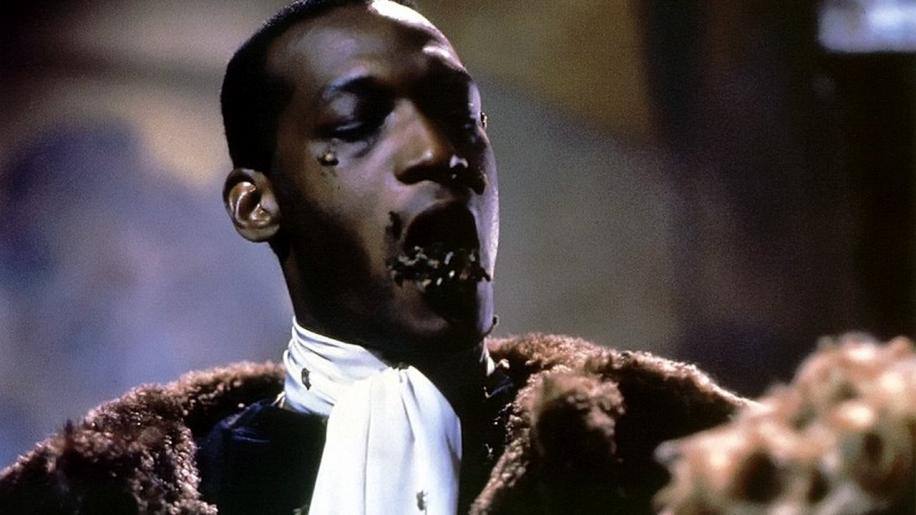 Single-minded student Helen Lyle (Virginia Madsen) is determined to present an academic thesis that will blow her opinionated and self-satisfied lecturers out of the water. Focusing upon the themes of urban folklore, she learns of the terrifying legend of the Candyman, a hook-handed serial killer who appears when his name is chanted five times in a mirror. Her search takes her to the urban squalor of Cabrini Green deep in the projects where she discovers to her horror that not only is the Candyman more than just legend, but he that will not rest until he claims her as his next victim. Candyman is that rarest of beasts, an original and satisfyingly cerebral mainstream horror movie, that succeeds on almost every level. The film marked Bernard Rose's first real foray into wholly American filmmaking, and his skills and ability with the material play an integral part in moulding this into a great piece of entertainment. Rose had already shown his aptitude handling highbrow psychological horror in his fabulous 1988 British outing Paperhouse, and he shows his skills again here, moulding an intense and intelligent plotline that grips the attention from the off. Inspired by Clive Barker's short story The Forbidden, Rose's script is a near-revelation, transplanting the narrative from Liverpool across the Atlantic to the slums of Chicago. Rose's choice to contrast the upper-middle class white academic society of Helen and her husband with the impoverished plight of the African American slums is a masterstroke. In creating a coloured monster in the shape of the Candyman, Rose draws upon a rich and horrific legacy of slavery and racism in constructing his own elaborate and effecting urban legend. His command of the folklore is superb, creating a sweeping miasma of fantasy and reality which makes us question what is real, what is imagination, who is telling the truth and who is deluded. His twisting and turning script is in itself a tribute to the conflicting and confusing realities of your typical urban folklore. Nobody really knows the true story, what is real or fabricated, but it sure freaks you out anyway. As a director, Rose handles his script deftly and effectively. Although intelligent and efficient, genre fans won't be left disappointed by the film, which includes some well executed scenes of tension. When the film switches into slasher mode there are some great scenes of visceral bloodshed, and although the camera chooses to portray these off-screen Rose certainly doesn't scrimp on the carnage of the aftermath. The sets too are wonderfully evocative, with the desolate Cabrini Green becoming an effective urban equivalent of the traditional haunted house. This is a genre movie of rare quality. At times it can be as brutal and unforgiving as some of the boldest of its type. At others it displays a style and grace that demonstrates that great films can and will be made within the confines of the horror genre, regardless of the dim view with which this type of film is generally held. The sense of elegance the film proudly displays is thanks in no small part to an absolutely astounding score by Philip Glass, whose soundtrack surely ranks up with the greatest given to any modern day horror movie. At times it recalls a more subdued and orchestrated version of a Goblin soundtrack found at Argento's peak. Its glacial piano motifs help create a sustained feeling of unease and isolation and help maintain the movies distinctive and effective sense of dread throughout, whilst lending an epic quality to proceedings. Unusually for a horror film, the acting here is uniformly superb, with not one bad central performance. Virginia Madsen makes a great no-nonsense pragmatist driven to hysteria, and the underrated Xander Berkely turns in another solid character role as Helens sleazy lecturer husband. The film undoubtedly belongs however to Tony Todd, whose faultless performance as the eponymous villain steals the show. Despite his minimal time in front of the camera, Todd creates a rich and memorable monster, sinister and unyielding, but injected with a level of humanity and pathos that separates him from the faceless cartoonish villains so often associated with this most disparaged of genres. Of all the characters, only Michael Culkin's cartoonishly overwrought Professor Philip Purcell feels forced and not entirely convincing. The fourteen years since Candyman's release have only served to illustrate what an effective and engrossing film this really is. Since then Wes Craven's phenomenally successful Scream series has ushered in a generation of self-reflexive ironic takes on the horror movie, followed by the increasingly bereft and banal culture of rehashing old classics with a hip teen cast ad-nauseaum. How refreshing it is to see a film of such delicate and intricate originality, and performed with such sincerity and seriousness. Candyman remembers that the secret to a great horror movie is not to make us laugh, not to make us wait only for the gore, but instead to engross us, to make us think, and ultimately to creep us out.