The one-button Flash game popularised by its iOS release finally makes its way to Android. 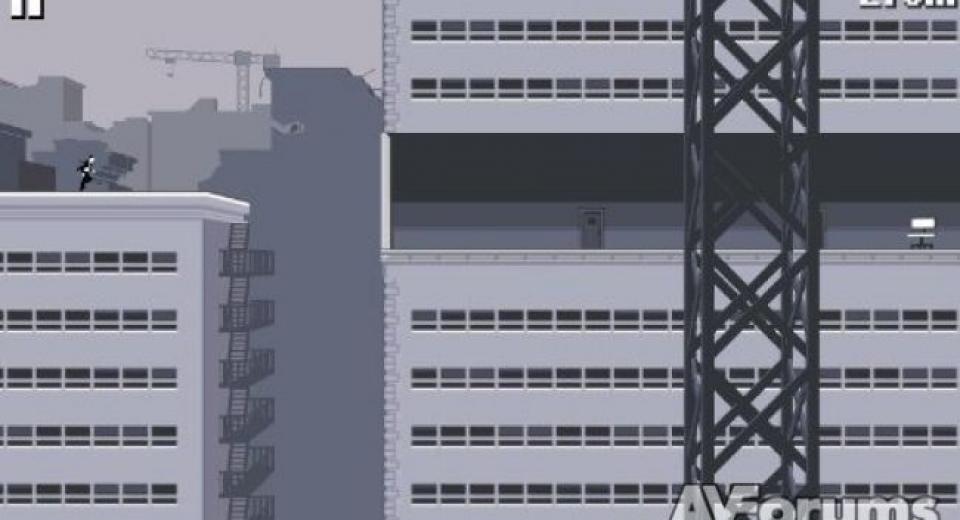 The product of just five days' work, Canabalt took casual gaming by storm when it was released on iOS a few months after debuting as a Flash-based browser game. It's taken some two and a half years, but finally there is an Android port courtesy of Kittehface Software, released as part of a recent Humble Indie Bundle.

Canabalt is a side-scrolling platformer in which the player-character (a man in a suit) runs continuously to the right, leaping from rooftop to rooftop in an attempt to escape a city under attack. There is only one control: tap the screen anywhere to jump. If you fall down, it's game over.

Each run begins the same way - the suited man leaps through an office window and lands on top of the nearest building. Platforms (in the form of rooftops, advertising hoardings, cranes, etc) are procedurally generated, so no two games are the same.

Jump height and distance is influenced by the duration of the player's touch and the speed the character is running. At full pelt the timing is more tricky, particularly if short jumps are required. Running into the boxes scattered around the environment will cause the character to stumble and lose momentum, so there is some skill involved in managing his speed.

The challenge is increased by various environmental events such as rockets that destroy buildings, bombs that need to be hurdled and rooftops that collapse under the character's feet. Canabalt places its audio front-and-centre. The loading screen reads, "For maximum awesome, headphones recommended", and that's advice worth heeding. Danny Baranowsky's soundtrack is an exhilarating accompaniment to the relentless forward momentum of the game. There are three tracks in total, but 'Run' (the original and default) is the most fitting. Just as much thought has gone into the sound effects: The tinkle of broken glass, the martial arts-esque exhale when attempting a big leap and the pat-pat-pat of shoes on cement all contribute to Canabalt's engrossing atmosphere.

But if it wasn't for Adam Atomic's mysterious setting and retro greyscale visuals, it's unlikely the game would have achieved the same level of success. Beyond the ostensibly simplistic aesthetic, there's a panicky, apocalyptic undercurrent that sweeps the player along. Huge War of the Worlds-inspired mechanical beasts can be seen setting buildings ablaze in the farthest layer of the background. The battle being waged will be lost, and the suited man knows it. His desperate attempt to escape is doomed; Canabalt is, after all, unwinnable: the singular goal is to get as far as you can before the inevitable fall.

It's difficult to have just one go on Canabalt, partly because it's so engrossing, but also because there are no barriers to an instant restart. At the end of a game the player is told how far they ran, along with the message, "Tap to retry your daring escape". The action required to restart is the same as the only control in the game. This is a masterstroke of design, because the player's finger is poised anyway. Furthermore, there's no 'Game Over' music, nor does the soundtrack begin again at the start of the new run. It just plays constantly in the background, giving a powerful sense of continuity between games. Canabalt features online leaderboards where top runs of the day, week and month are displayed alongside a list of the all time farthest distances achieved. At the time of writing, the record is just shy of a mind-boggling 300,000m.

Kittehface Software's addition of the 3D background for Android is a really nice touch. The original 2D is available as an option, but it's hard to imagine many players will abandon the snazzy new visuals. The only other notable difference between the Android version and its iOS counterpart is that in this port it doesn't appear to be possible to use MP3s stored on the device in place of the game's soundtrack, but that's no great loss.

Canabalt HD is a faultless port of a game perfectly suited to touchscreen devices. Highly recommended.

Originally released in 2009 as a browser game, Canabalt really took off when it appeared on the iPhone. It's taken some time, but finally there's an Android port, boasting optional 3D visuals. The simple one-button gameplay is as fun as ever and Danny Baranowsky's soundtrack is the perfect accompaniment. Canabalt couldn't be better suited to touchscreen control and remains a defining game of the 'casual' genre.