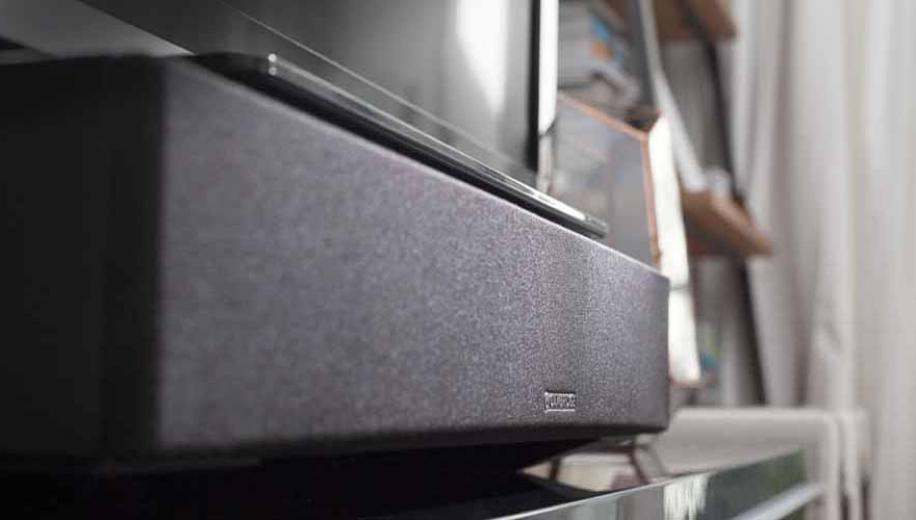 What is the Cambridge Audio TV2?

The Cambridge Audio TV2 is a 2.1-channel soundbase aimed at smaller TV screen sizes, although there's also the larger TV5 for those looking for a soundbase to match a big screen television. The TV2 isn't a new product but is actually an enhanced version of the existing TV2, which Cambridge Audio refer to as Version 2 or v2. They have added some new features, so along with aptX Bluetooth support, there's an HDMI connection and support for Hi-Res audio. There's also an improved Digital Signal Processor (DSP), along with the existing four EQ settings. The remote control has also had an ergonomic make-over, whilst the cabinet boasts a 'seamless' design with no visible joins and the power supply is now internal. The TV2 costs £199 as at the time of writing (February 2017), putting it into a very competitive price bracket, but does it deliver enough to stand out from the crowd? Let's find out. The look of the new and improved TV2 follows the same basic design as the previous version, although there have been some changes. So the design retains the forward-firing speakers built into an enclosure large enough to put a TV on and a downward-firing subwoofer on the underside of the cabinet. However the new TV2 uses a 'seamless' MDF enclose that is designed to ensure that the cabinet is presented with no visible joins. The TV2 also now has an attractive black satin finish, as opposed to the matte finish used on the previous generation. The earlier TV2 used an external power supply but the revised version now has the power supply built-in for a more discrete installation. The build quality is suitably solid and the cabinet is designed to minimise vibration and distortion, whilst the TV2 itself measures 550 x 100 x 333mm (WxHxD). Despite the slim and discrete proportions of the TV2, it still includes plenty of power with the new version including double the digital amplification of the previous model. This increased power works in conjunction with the amplifier's new optimised signal path and the TV2 continues to feature two patented 57mm BMR (Balanced Mode Radiator) speaker drivers. These are now located in their own independent, sealed enclosures to allow for a wider but more accurate sound. These forward-firing drivers are behind a removable cloth grille on the front of the soundbase. The TV2 also features a downward-firing 165mm subwoofer which has been design to compliment and augment the twin BMR drivers. The new version of the TV2 also has two bass ports at the rear to help boost the overall low frequency performance of the soundbase.
The new TV2 is attractively designed, solidly built and easy to set up The connections are located on a panel at the rear of the TV2 and here you'll find an optical digital (TosLink) input, a 3.5mm input jack and analogue stereo inputs using RCA connectors. However the new version of the TV2 now adds an HDMI connection as well which supports ARC (Audio Return Channel), allowing the playback of audio from any compatible TV. The TV2 also includes a new and improved aptX chipset for Bluetooth support, allowing for a higher resolution wireless connection of up to 10m, along with one button Bluetooth pairing with up to eight audio devices. At the rear you will also find the two-pin connector for the built-in power supply and provided cable. The TV2 has a redesigned remote control that offers a more ergonomic shape, making it comfortable to hold and easier to use. The remote is quite large and as such the limited number of buttons do seem a bit sparse but there is everything you need to effectively control the TV2. It includes buttons for selecting ARC, Optical, Aux and Bluetooth inputs, with the latter doubling as the button for pairing the TV2 to a Bluetooth device. There's also an on/off button, a mute button, volume up and down and buttons for selecting the DSP modes. The new version of the remote control now includes dedicated buttons for adjusting the volume of the built-in subwoofer.
There's now an HDMI connection and the remote control has been redesigned as well The TV2 is designed to be used with TVs that have a stand no wider than 550mm and no deeper than 333mm and the TV can not weigh more than 30kg. If the TV is larger or heavier than this or if it uses a stand with feet at either end rather than a central base, then you could install the TV2 on a lower shelf of your TV rack. The soundbase sits on two feet that provide support and isolation, as well as sufficient space for the downward-firing subwoofer. The new HDMI connection supports ARC at up to 24-bit/192kHz, which allows playback of Hi-Res audio from compatible TVs and the TV2 can decode and pass back LPCM 2.0 audio. The TV2 includes an auto power off feature, so if it receives no audio for a few seconds from the TV it turns off, but it will turn back on again as soon as you turn the TV on and the soundbase detects an audio signal. When you remove the front grille you'll find that, between the two forward-firing speakers, there are instructions and controls that take you through the process of learning IR commands from your TV's remote control. The instructions are easy to follow and, after a few seconds, the TV2 will have leant the volume up and down commands from your TV remote, thus allowing you to adjust the volume from a single controller. Unfortunately there is no actual display on the front of the TV2 behind the cloth grille, in fact all you'll find is an indicator LED and an IR receiver. The TV2 boasts an improved DSP that delivers lower distortion and more processing power and it also includes the same four EQ settings found on the previous model – Film, Music, TV and Voice – depending on what you are watching or listening to.
The inclusion of aptX Bluetooth and Hi-Res audio support are certainly welcome

So have all these enhancements to the TV2 been worth it? Unfortunately we didn't review the original TV2, so we weren't in a position to make a direct comparison but we did review the previous version of the larger TV5, so we did have a point reference. The changes made to the TV2 go beyond mere cosmetics and and there have been a number of internal improvements made, that help enhance its overall sound quality. The good news is that all these improvements have resulted in a soundbase that delivers a great all-round performance.

The front soundstage does indeed deliver a wider presence thanks to the two forward-firing BMR speakers and the sound is reminiscent of the larger TV5. There is a terrific sense of stereo separation with both music and effects but crucially dialogue always remains clear, which is vital for a soundbase that will largely be used for watching TV programmes and movies. The mid-range is very well represented, as are the higher frequencies, making it easy to pick out specific effects in soundtracks such as Jurassic World. There is a nice sense of detail with plenty of ambience and the overall soundstage felt balanced, whilst the TV2 could go loud without becoming harsh or brittle. The combination of the downward-firing subwoofer and rear bass ports certainly help to add a solid low frequency foundation to the sound without overstaying its welcome. The bass was well integrated with the forward-firing speakers and the ability to be able to fine tune the subwoofer is a welcome addition.

Of course the bass performance of the TV2 will never be able to match a soundbar or soundbase that uses a separate dedicated subwoofer but for a single-box solution the TV2 gives a good account of itself, especially considering its dimensions. When watching films with a heavy bass presence like Pacific Rim, the TV2 was able to deliver a weighty sound that complimented the on-screen action but it obviously can't compete with some of the competition in this regard. We did like the TV2's ability to spread the audio across the front of the room, creating a more immersive experience and mitigating the lack of any surround presence. The inclusion of the various EQ modes can be useful depending on the content you are watching, so the Film mode can give movies a greater sense of scale and the TV and Voice modes can be useful with various TV programmes. However in general we preferred the Music mode, which offered the most balanced performance overall.

Whilst you might not think of a soundbase as the your primary method of listening to music, the way we consume audio these days has fundamentally changed. Many TVs now offer access to any number of music sources, be that streaming services or music on your own network, and as such the ability to pass Hi-Res audio to the TV2 from your ARC capable TV is a definite benefit. The Cambridge Audio certainly gave a good account of itself when it came to music and the combination of the forward-firing stereo speakers and the downward-firing subwoofer resulted in an enjoyable listening experience. The same was true of the built-in aptX Bluetooth capability, so if you just want to connect a smart device to the TV2 and listen to some music on the sofa, then that is certainly an option and you might be surprised at the quality of the results.

The Cambridge Audio TV2 Version 2 (v2) is a well designed and very effective soundbase that delivers a great all round audio performance. The enhancements made to the new model go beyond mere cosmetics, although the seamless cabinet and gloss black finish are nice. The newly designed remote control is also handy and the addition of an HDMI connection and Hi-Res audio are certainly welcome. The internal improvements definitely raise the TV2's performance with an open and detailed front soundstage that integrates well with the built-in subwoofer. It had a decent bass performance for a single-box solution and had plenty of power in terms of its built-in amplification. The Cambridge Audio performed well with TV programmes and movies but was also surprisingly good with music, making it a great all-round performer that is definitely worthy of recommendation.

The biggest problem that any soundbase has these days is that the recent trend has been for TVs to have feet at either end of the panel rather than a central stand. However since the TV2 is aimed at smaller screen sizes, there is a higher chance of a TV using a central stand and thus making installing the soundbase easier. The other option is to go for a more traditional soundbar but the larger size of the TV2's cabinet does give it an advantage in terms of sound quality. Having said that, the sub-£200 price bracket is a very competitive one and there are plenty of soundbars with separate dedicated subwoofers that could certainly give the TV2 a run for its money in the bass department. In terms of possible alternatives there is the Acoustic Energy AEGO Sound3ar, although that lacks an HDMI connection, or the Samsung HW-K450 soundbar, which has everything and is great value for money.