The ultimate in convenience but it has some limitations 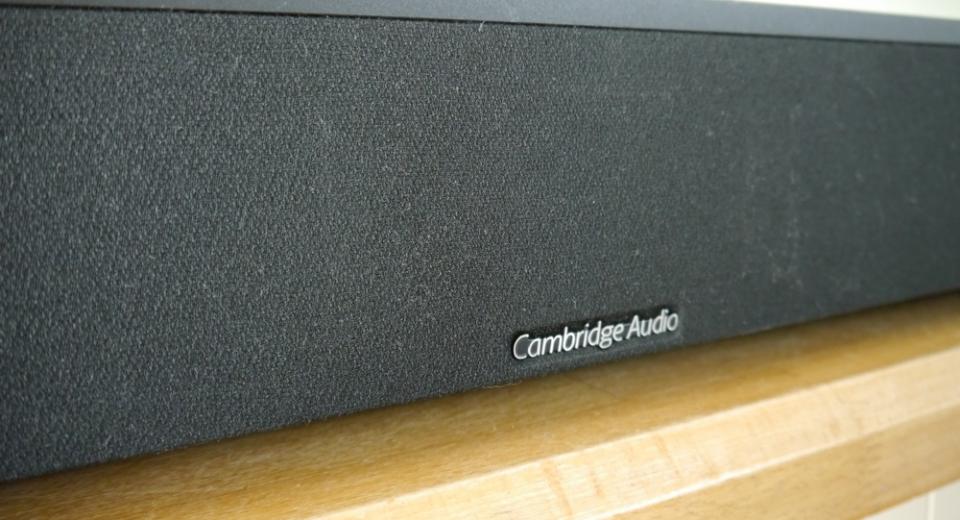 What is the Cambridge Audio Minx TV?

Soundplinth - there’s a new term to stick in the glossary of AV Products and this is the third we’ve seen in fairly rapid succession with more incoming.

Why would you want one? The simple answer is your flat panel TV sounds awful and, well, flat and you’re looking for something more refined and punchy. You could, of course, elect for something a little more expansive by choosing a soundbar with subwoofer package but the point of these products lies in convenience and tidiness.
So here we have Cambridge Audio’s solution to a problem we didn’t really know needed solving until recently in the Minx TV, which was designed in the UK and retails for just under £200, which puts it on roughly level pegging, price-wise, to the Maxell MXSP-SB3000 and Orbitsound SB60, we looked at earlier in the year. Let’s see if this little Minx is tempting enough to part with your readies…

Plain and simple - as per requirements
The Minx TV looks exactly what it is – a speaker system configured to accommodate the placement of something upon it - it’s almost a speakershelf but plinth is a better description, given its trapezoid shape and tapered sides. It’s a fairly unremarkable bit of kit but we guess that’s the point of the exercise here and it’s unobtrusive enough, save for the indicator light that can draw the eye late at night. Connectivity options are a bit limited – certainly compared to the competing Maxell product – so you only have one S/PDIF digital audio, a 3.5mm auxiliary jack and RCA Stereo, as well as the option of Bluetooth streaming.

Set up is simplicity itself, whether wired or wireless. For the physical connections, you simply just connect the appropriate cables to the relevant inputs which are nestled in a recess at the back of the unit. Initial Bluetooth pairing with a device uses a dedicated button on the remote, rather than it going in to pair mode automatically when the Bluetooth input is selected but it’s still a very straightforward process.

In terms of what you can place on top of the Minx TV, Cambridge Audio advises that it’s tested for TVs of up to 47-inch screen size and weighing 30Kg. In practice, you get a safe area of 49cm (width) and 30cm (depth) to play with so your TVs base-stand will ideally be rectangular or ovate. In other words, the recent trend for stands that span the entire width of the display – or further - aren’t going to work. Where's my remote?
The included remote is probably the smallest we’ve ever seen with any AV product but it works and allows for full input and mode selection as well as the expected volume controls. We’ll concede that it didn’t need to be especially big, given the simplicity of options, but this is a controller that's bound to get lost on a regular basis

Cambridge Audio has equipped the Minx TV with AptX Bluetooth Streaming which is generally pretty robust be we did experience a few drop-outs during our streaming tests. Nothing too alarming, it’s pretty much par for the course with Bluetooth, but it can still be quite irritating.

The Minx TV also features two of the manufacturer’s patented BMR (Balanced Mode Radiator) speaker drivers which are designed to deliver a wider soundstage than the cabinet dimensions should really allow. Rather than just utilising a regular ‘pistonic’ driver, which vibrates only forwards and backwards, the 2.25-inch drivers also operate on the vertical plane, moving upwards and downwards. Quite what effect this will have remains to be seen but Cambridge claims it widens the ‘sweet spot’ for stereo. There’s a fairly sizeable – box dimensions considered – 6.5-inch subwoofer inside the Minx TV which is claimed to deliver half of the 100W total output. There’s also a choice of four DSP (Digital Sound Processing) modes available with the standard TV, Film, Music and Speech options on offer but there are no separate ‘Bass and Treble’ controls, which might hinder placement in some cases.

We first fired up the Minx TV with some ‘regular’ TV viewing and we were impressed with the clarity of the dialogue and it certainly provided a shot in the arm to the speakers in the 40-inch Samsung and 65-inch Toshiba 4K sets it was connected to. Despite the fact the sides of the cabinet are sealed, you would swear blind that there is sound coming out of them, which certainly gives some credence to Cambridge’s claims that the Minx TVs BMR’s deliver a wider soundstage but there is still, undeniably, a sweet spot – firmly front and centre. However, listeners at more acute angles will benefit from the enhanced audio.

For movies with multi-channel audio tracks, the Minx TV was a little less composed and whilst it still managed to anchor and place dialogue accurately, effects were more difficult to locate although, again, it will certainly outperform your flat panel. Those very low effects handled by the subwoofer would also sometimes distort and overpower the rest of the audio, especially using the Movie DSP, so we’d avoid that mode and whilst there’s not really a great deal between the other three, in terms of tuning, we found the Voice and Music modes to offer the best accompaniment to film soundtracks.
The sub can overpower and distort so placement is important.
Musically, the Minx isn’t a bad performer either. There is the same tendency for the sub to overpower the rest so it’s a shame there is no dedicated control to knock it back a touch, instead you’re really only left with the global volume control to tame it. We noted that the sub performance – like almost always – was very placement dependent and we’d advise the Minx TV is best situated somewhere it has room to breathe, i.e. not with its rear positioned close to a wall. We had it in a couple of locales and performance was notably better with it positioned more than 50cm from the rear wall.

So, provided you can find a suitable place in which to seat the Minx TV, it will reward you with some surprisingly rich and punchy audio that shows a good adeptness across its nominated disciplines. The subwoofer can distort and over-power but for £200, or so, this is a pretty decent speaker package.

The Minx TV is a fairly non-descript speaker unit but that’s the point really. It’s designed for those that don’t want clutter and it’s certainly a neat and fairly inconspicuous package. There aren’t a huge array of connections – 1 optical, 1 stereo, 1 aux, is your lot – but it should be sufficient for most scenarios and the inclusion of Bluetooth streaming certainly opens out the possibilities for your music collection. The remote control is unspeakably small and lightweight and bound to b frequently misplaced but gets the job done.

Overall, we found the Minx TV to put on a decent show, whether it was with regular TV watching, movies or music. As we said above, placement is nearly all and its rear is best kept 50cm, or more, your wall otherwise the bass can really distort. The subwoofer still has the tendency to overpower the rest of the package and we’d have welcomed a separate control for it but, in its absence, just avoid the Movie DSP which is the worst culprit.

As an answer to the problem of beefing up your TVs audio, the Minx TV is certainly a success and priced at around £200, it’s definitely competitive. For those who simply mush have an incredibly tidy solution, it's a possibility although we would encourage readers to stretch to a soundbar, at least, where possible.