Does the Wii U provide enough new features? 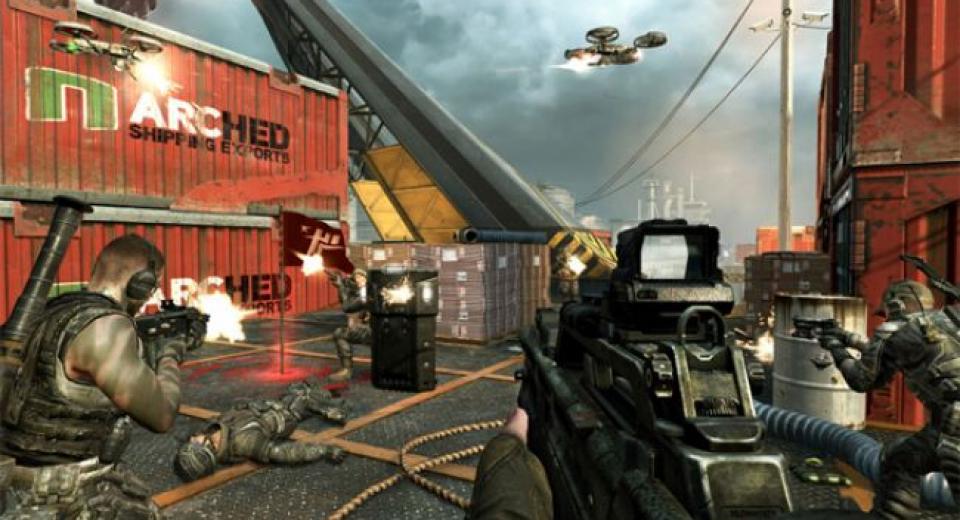 I never thought I would see the day when a full blown Call of Duty game would be running on one of Nintendo’s machines. But here I am being proved wrong as Black Ops 2 has launched for the Wii U and looks to makes use of the new GamePad with some interesting features not seen on the 360/PS3.

Our views on Black Ops 2 have been stated before in our review of the 360 version (linkage) and all of the points raised in that apply here too:

The question whether this year's changes make Call of Duty a fundamentally better game is debatable. Single player is the most dynamic and interesting campaign the series has seen for a while, even though it has its pacing issues the setting presents more than enough new toys to warrant a look. In multiplayer Treyarch are getting good at honing the formula, dropping and implementing features with a now experienced hand. Big strides are being made with the additional features, COD TV and COD casting are clever additions which will almost certainly enrich and extend the life of the community. Zombies continues to grow to more than just a distraction into a deep fleshed out experience.

Although most of what's on offer might not be particularly new it's a well executed version of the package which can still deliver better than the many which attempt to emulate it . At this point it's unreasonable to expect the genre shifting changes that the series may have offered in the past, and the majority of the community likely wouldn't want such upheaval in what has proven a very popular formula. Treyarch have become very adept at taking the pulse of the community and providing just what it needs for another year of survival at the top while at the same time offering hooks for new players and having the best chance yet of reconnecting with a few sceptical ones. Whilst I didn’t particularly enjoy the first playthrough and find the near-future setting quite bland, the Wii U version is actually quite refreshing. Dare I say that I am finding it to be more enjoyable than the 360 version?

As mentioned, the game is the same as the other consoles’ in terms of mechanics and graphics meaning it looks and plays as good as its rivals. Surprisingly, the GamePad isn’t as cumbersome as you’d expect and it doesn’t take too long to get used to holding the larger controller in your mitts. For those that have played the 360 or PS3 version for any length of time, they will need to change the button functionality as you will more often than not press the wrong one. For instance a crouch may be confused with a jump or a reload with a weapon swap unless swapped to the ‘classic’ layout.

As with many of the launch titles for the Wii U, Black Ops 2 can be played either on the TV with the GamePad supplementing the action on-screen or solely on the GamePad should the TV be in demand by another member of the family. For what it’s worth, the GamePad only provides added detail during multiplayer modes as the singleplayer campaign is shown on the pad throughout. The multiplayer is where the pad comes into its own though as it becomes so natural to look down at your controller, see where your enemies/friendlies are and then take action from doing so.

It will surely develop a breed of new tactical players who will become familiar with every inch of a map, know where the key hold points are and move quickly and effectively to take out nearby red spots on their map. All your scorestreaks are called in via the pad too, all of which are just a thumb's reach away but some do require interaction with the TV set which is a shame as plotting airstrikes on the GamePad would be great.

Even someone with stubby mitts shouldn’t struggle to press the buttons on screen which is a good sign considering you can change your class on the fly and not have to break the action to do so through the pause menu anymore. Playing the entire game through the GamePad isn’t too shabby either, the graphics are exactly the same (albeit if the image is a little washed out) and the only niggle is that the subtitles are a little hard to read. For someone as backwards as me who has subtitles on for every game this is a bugbear but for others it might not be but this is hardly surprising given the resolution change in order to fit the image on the pad. There are a couple of missed tricks with the GamePad as you can’t utilise all of your scorestreak perks via the GamePad and the campaign doesn’t really make anything of it other than mimicking what is already on your TV. This is the same for the audio as well; it can be played through the TV and/or the GamePad which is useful for when you want to play on the pad rather than the big screen. There are no uses of the either the gyroscope or the accelerometer which, depending on your stance, will be a good thing or a bad thing.

The online modes are just as solid as you’d expect them to be on other consoles but there is a problem with ‘lag’ on rare occasions. It’s not present in every game, but for the ones that it is it can spoil a solid play session.

The GamePad is a bit of a hit and miss affair when it comes to the sensitivity of the analogue sticks and the trigger buttons. You can be resting your finger on a trigger and end up firing your gun in some instances, giving your position away. The former issue really makes itself noticeable when you’re trying to line up a headshot or have to quickly whirl around to shoot down a sprinting foe.

It really is surprising how a few simple ideas courtesy of a new controller can alter a game's functionality and appeal so much. Multiplayer felt a little stale when played on the 360 but this new level of interactivity makes complete sense. Don’t expect any interactivity with your teammates though as it is unlikely that anyone will have picked up a headset. Not one person I encountered did which is a shame as the GamePad microphone and speakers could have sufficed perfectly.

It's not often that I warm to games that I previously didn't like but in this case, Call of Duty has a saving grace in the form of the GamePad as the simple ideas it brings make a massive difference to the entire experience. It looks great, sounds great and the online modes are surprisingly stable much like the ones seen on other consoles which aren't as populated as you would hope. Come Christmas though, there should be an influx of numbers as more people unwrap this on the day of festivities.