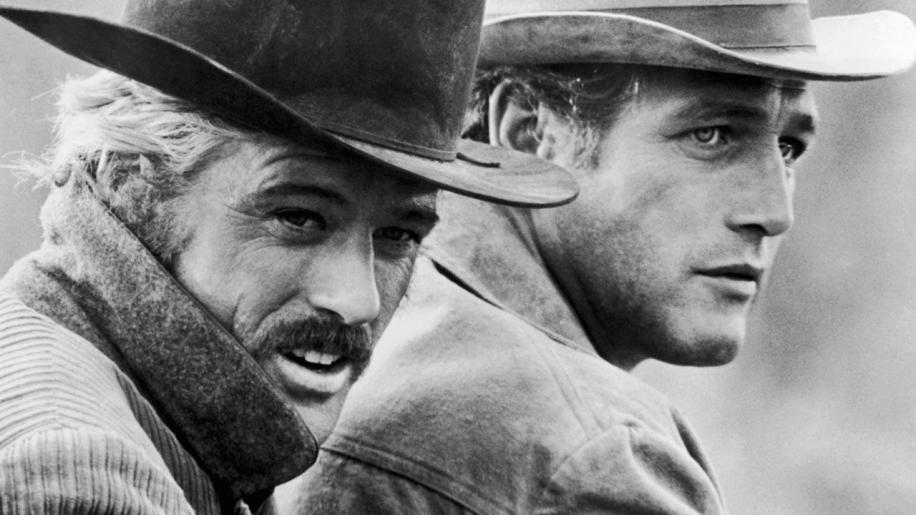 One of the most frequently recurring types of film in the last 40 years just has to be the buddy movie and probably the original picture of this kind was ‘Butch Cassidy & the Sundance Kid’ which was released back in 1969. I first saw this movie being shown as a 16mm print on a clattery old Bell & Howell projector at school in the early 1970’s and it made such an impression that I bought my own print in the late 70’s to show on my own projector at home. Since then I’ve bought the DVD and most recently added the American Region A locked Blu-ray to my collection. You’ll have gathered that I like this film quite a lot. For those who have been exploring the upper reaches of the Zambezi river for the last four decades, it’s a modern classic Western starring Paul Newman and Robert Redford as the two titular Bank Robbers, who make the mistake of robbing trains belonging to a certain Mr E.H. Herriman of the Union Pacific Railroad and live to regret it as he hires a top notch posse of trackers to find and capture them – dead or alive. Our two heroes decide to hide out in Bolivia, where they won’t be found and go straight, but this proves to be well nigh impossible. Along for the ride is schoolteacher Etta Place, played by Katherine Ross, with whom both men are in love. Her only stipulation is that they shouldn’t expect her to watch them die.

Okay, so that’s the story in a nut shell but, for me, the movie isn’t really about the story. It’s about memorable scenes and great lines (courtesy of writer William Goldman) as well as the on screen chemistry between Newman and Redford.

The movie opens with a sepia tone sequence involving the Hole in the Wall Gang being projected on a wall as the main titles play and switches to the story as the Sundance Kid (Redford) is accused of cheating at cards. In most Westerns, this would be the cue for the gambling table to be up ended and some serious fast draw work. This movie was different. Butch enters at that moment and calls Sundance by name, at which point the accuser realises his big mistake. Instead of killing him, Sundance would be quite happy to leave on the condition that he is asked to stay. Butch acts as intermediary here and we’re eventually spared some carnage. This was quite a fresh approach to the hackneyed scene and it was accomplished with such great tongue in cheek humour that it pretty much set the tone for the rest of the movie. These guys aren’t out and out cold blooded killers, they’re quite reasonable chaps really.

The humour continues as they rob the first train in the movie, only to find that Woodcock, a real Boy Scout of an employee, has locked himself in the carriage containing the money and refuses to open the door. They try to reason with him as they don’t want to see him get himself killed but the jobsworth merely recites that he was entrusted by Mr E.H. Herriman of the Union Pacific Railroad before –KABOOM - the doors are blown off. Again Butch goes to tend to the injured Woodcock rather than grab the money.

Later, while robbing another train, Butch is delighted to recognise the voice of Woodcock behind the locked carriage door – again refusing to open it and reciting his Mr E.H. Herriman monologue. This time they manage to trick him into opening the door by pretending to be about to shoot a vociferous woman passenger. Unfortunately the conscientious Woodcock has locked the money in a chunky safe, which is then opened by an explosion reminiscent of the ‘You’re only supposed to blow the bloody doors off.’ scene in ‘The Italian Job’. As paper money floats in the air, Sundance enquires,”Think you used enough Dynamite there Butch?”

This is where their troubles begin as the posse hired to capture them leap out of a following train and pursue them persistently as they try everything they know to shake them off. “Who are those guys?” asks a concerned Butch every time they think they’ve eluded them but they inevitably appear steadfastly on their trail.

Probably the best scene with the most memorable dialogue ever is where Butch and Sundance have been pursued to high ground and their only chance of escape is to leap from a mountain top into a river way below, surrounded by huge rocks.Sundance is prepared to shoot it out with their pursuers, there and then but Butch asks why he doesn’t want to jump.

Butch: Are you kidding, the fall will probably kill you!

The movie also has the great bicycle scene with Butch and Etta cycling through soft focus meadows and trees to the strains of ‘Raindrops Keep Fallin’ on my Head’ sung by B. J. Thomas. The song went on to be an international hit for French singer Slasha Detyres – sorry, that should read Sacha Distel. The smile on the audience’s lips is frozen by the final scene as our two heroes move into Western lore in a gory shoot out which ends in a poignant freeze frame. Again another very memorable image that has stayed with me for almost forty years.

It should be remembered that the film spawned the popular 1970’s TV series ‘Alias Smith and Jones’ about a couple of train and Bank robbers who try desperately to go straight in the Wild West. The series continued the off beat humour between the two buddies, Hannibal Hays and Kid Curry but was no match for the movie in terms of style. So, this film has a very special place in Western movie history – some might even call it iconic, so why, oh why, oh why has it been released on Blu-ray with a ropey MPEG-2 transfer. This is an important movie and deserves a proper High Definition transfer and restoration. I’ve covered this in more detail in the picture quality part of the review, but people need to be made aware of this travesty as soon as possible. I wonder which disrespectful child at Fox was responsible for this decision. This is exactly how to destroy the future of the Blu-ray format. Distributors who have the resources as well as the product should know better than to try to dupe their customers with sub standard releases. Fox – how very dare you!