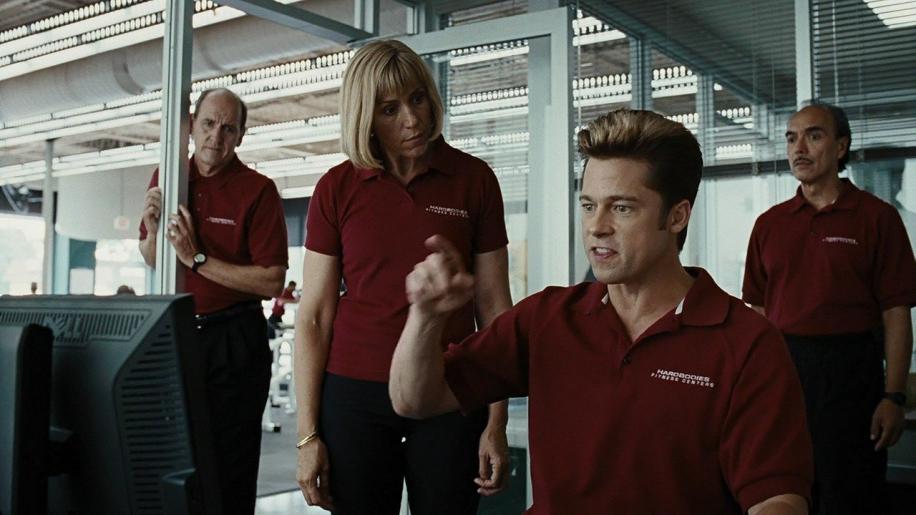 There is an immeasurable value to a clear set of instructions. Follow them and things should quite simply fall into place. If however you try to be a smart Alec and don't, well you'll then probably go round in circles for hours or days upon end wondering where it all went wrong.

So it's quite simple. If something or someone clearly instructs you to 'Burn After Reading', surely it would make utter sense for you to do just that? Hmmm, maybe not so......

Okay, so what is this film all about then? Well, it revolves around a basic premise. Take the most menial and irrelevant of confidential CIA information, circulate it amongst a circle of ill-informed dimwits and not only will it lead to a likely disaster of sorts, it'll also lead to the unfolding of a most bizarre sequence of events.

I've always wondered why some movies love to slot in the "This tape will now self-destruct in 5 seconds" message. It's as if the powers that be have decreed that although special agents are allowed to save the world, they're still not competent or trustworthy enough to dispose of classified information appropriately. How strange ?

There's an irony in there somewhere and the Coen brothers have done their best to make it incredibly simple to understand. Relate it to how Chinese whispers eventually take on a meaning of their own, compare it to an unstoppable toppling of dominoes or simply just call it the way that the wind decides to blow. The formula here is based around a similar undeterminable cornucopia of bizarrely intertwining events that take on a life of their own.

It's all a case of matters overtaking events and destiny being unwittingly decided by those completely unaware of what it is that they are doing wrong. The tangents that they touch being set into a freewheeling motion, only to be brought together in full circle once again. It's a mad, mad world that the Coens have conjured up here and don't we know it. If you don't already then you sure will!

Take a communal area like a public gym, an ageing gym instructor desperate for some rejuvenating plastic surgery, a depressed CIA analyst who's recently been forced out of his job, a philandering husband and a host of extra-marital affairs. Not only do these all add a distinct comedy to the mix but a quite unlikely string of events somehow manages to hang together.

Linda Litzke (Frances McDormand) works at the Hardbodies gym along with a dim-witted assistant called Chad Feldheimer (Brad Pitt). She's getting on in life, she's still very single and the 'outwardly facing areas' of her body are beginning to sag a little. Becoming quite insecure with it all, she's convinced herself that a nip and a tuck are long overdue. Problem is she hasn't got the money to get it all done. Call it fortune or misfortune; she needs this 'perk me up' surgery no matter what.

Little surprise then that her mind is fertile ground for many a mis-construed thought. When a CD is found in the ladies locker room at the gym, Chad has a perusal of the contents only to discover that it contains some sort of confidentially classified information. It's exactly the sort of thing that triggers her off into a hair brain scheme of an idea which eventually leads to a blackmail scam. In reality what they actually have in their possession is a disc full of the very low level and worthless memoirs of an ex-CIA analyst.

Neither Chad or Linda know at this stage that it's stuff fit for the dustbin. Their thoughts are completely led by ill-advised personal agendas; their plans toy between blackmail or possibly selling the information onto the Russians. The Russians? Yes why not? The cold war may not be as cold as it once was but it hasn't completely thawed out either has it? Surely, there's a ready market for leaked CIA information somewhere? Well at least that's what this unlikely pair thinks!

John Malkovich plays the ex-CIA analyst, Osbourne Cox. The opening scenes see him being forced out of his job at an exit interview due to a perceived drinking problem. It's a difficult thing for a man to have to accept, let alone an overly proud one. The loss of both his job and lifelong career aspirations and being left with having to face the void of an onward reality becomes pretty difficult to reconcile. What the poor fellow doesn't realise is that it also puts the final straw onto his marriage as well.

Tilda Swinton plays Katie Cox, his hard nosed and immensely uptight other half. She's a doctor who's been having a longstanding affair behind his back. Her own infidelity causes her very little concern. Being quite at ease with the fact that what he hasn't known about won't ever harm him she feels incredibly little guilt about it all. In any case the fact that he's now walked out of his job without consulting her finally gives her a very real reason to file for a divorce.

Poor guy, so not only has he just lost his job, he's then immediately served with divorce papers and evicted from his house. He'd be forgiven best left in the belief that's he'd been the root cause of it all rather than to try to work it all out. It all adds up to a highly strung and intense character portrayal. In actuality it results in John Malkovich delivering one of his better and most enjoyable performances in a movie for a long, long time.

Okay, enough of that but where's the link and what's this disc got to do with it all? Well, as part of the commencement of divorce proceedings, Katie is advised by the lawyers to get a hold of all of his personal affairs. She wastes little time and does so by taking a blanket copy of all the material off of his computer. The disc gets sent to the lawyer but somehow his secretary puts it into her gym bag. She only then inadvertently goes and loses the disc at the gym doesn't she! Is it beginning to come together now?

So, now you've got the link between the Hardbodies staff and Ossie Cox, it all now leads to a fabulously disastrous and hilariously blackmail attempt upon him. The Coens waste no time in pulling together a fast edited sequence of interlinked events that are not only truly absurd but laughably so. The blackmail remains nothing other than a doomed juvenile attempt to withdraw money out of him.

However, it doesn't just end there, it only just begins there. In true Coen style they inject further dimensions that add utter chaos to the mix. Enter George Clooney who plays Harry Pfarrer, a guy who's married to an upcoming and successful children's book writer, Sandy Pfarrer (Elizabeth Marvel). Whilst he enjoys the trappings of a respectably good life he is in fact an extremely bored house husband. There is simply not enough in his life to rid him of his pent up levels of excess energy. The misguided fool has therefore taken to cruising internet dating sites and impulsive jogging to help burn off his latent energy instead.

As you can imagine his philandering exploits open him up to no end of compromising and entertaining encounters. Not least of which firstly begin with the affair that he is having with Katie Cox and secondly, the one that he starts to have with Linda Litzke.

None of them realise it but the cause and effect of the whole upcoming situation is actually down to each and every one of the characters in question. Problem here is that no one has any appreciation of any of these facts and what the relationship between it all actually is. Everyone is so caught up in where there own lives are headed that no one actually wants to know where they're headed as a collective. In short they're living a stones throw from a train wreck of a life and a very real head on collision that's headed their way.

There does of course come a point that brings a closure to this vicious circle of deceit, ineptitude and comedy between all these idiots. Unsurprisingly it all ends up becoming a frail and heightened state of schizophrenic paranoia for all involved. Although it also remains debatable from the whole debacle that they were actually all a bit cuckoo to begin with and it was only ever going to be a matter of time.

Surprisingly, to a degree, there's some truth and parallel to be drawn out of this mess for all of us. The lesson and wisdom to be gained is that far less of the blinkered approach and a little more expansive thought in our day to day lives would make the world feel a relatively more organised and constructive place for all concerned. Well, that was my take of it all but feel free to make of it what you will.

Burn After Reading may not be to everyone's expectant tastes and I'm sure some of you will be surprised with the direction the Coens have taken with this film compared to what they gave us in No Country for Old Men.

However, if you rid yourself of any pre-conceptions, then this movie is a thoroughly enjoyable and entertaining watch in its own right. It's dry, it's witty and it's incredibly funny in being nothing other than a complete and utter nonsense of a story.

I'll let you work out what it all has to do with a former Greek Orthodox priest (if anything) but the ending had me roaring with a bellyful of laughter and chuckling to myself for days afterwards. It's definitely worth a watch.