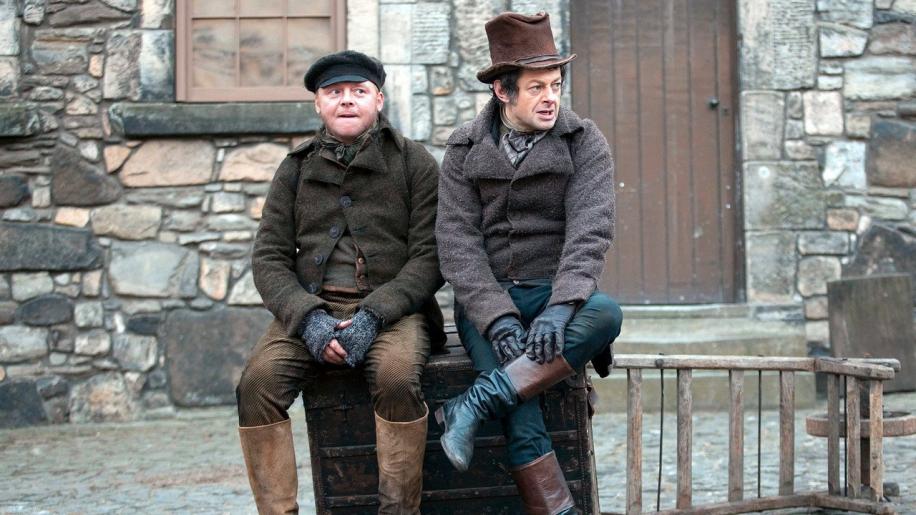 One of the more macabre episodes in the history of Edinburgh has to be the tale of grave robbers Burke and Hare from the late 1820’s. When I heard that a new film had been made about them, I imagined something dark, grimy, gory and totally unpleasant – i.e. something I’d much rather not see. Then I heard that it had been directed by the legendary John Landis (‘An American Werewolf in London’) and my spirits rose. When I also read that Simon Pegg (‘Hot Fuzz’, ‘Shaun of the Dead’) was starring in it, I knew it had to be a comedy. So, a comedy about grave robbers and murderers. How on Earth was that going to work? This, I had to see!

I’m quite partial to a bit of good black comedy but, these days, many directors seem to go over the top with the shock or revulsion element – almost as if to say they really wanted to make a full blown horror movie, but this was the closest they’d been allowed to get. With all of this in mind, plus the fact that I’d read some negative reviews from the movie’s quite recent cinema release, I settled down with mixed expectations. It would have been mixed nuts, but I’d eaten them the night before.

What a happy surprise it was to find that, for me, ‘Burke and Hare’ on Region B locked Blu-ray is a movie that blends the comedy and darker elements of the tale with quite a light hand, producing several belly laughs along with some delicious mirth that teeters close to the edge but somehow manages to stay on the acceptable side of good taste. All I will say is that you should not set out looking for total historical accuracy here, as many facts may have been massaged in order to shoehorn them in to the storyline – such as Greyfriars Bobby making an appearance when, in fact, he wasn’t around until 30 years later. There’s always some Smart Alec out to spoil the fun. As we are told at the beginning, ‘This is a true story, except for the parts that are not.’

So anyway, a pair of Irish immigrants, William Burke (Simon Pegg) and William Hare (Golum himself, Andy Serkis), are making ends meet by conning the good people of freezing cold Edinburgh into parting with their ‘ba’ bees’ for things like cheese mould masquerading as Donegal moss which they claim to be a cure for boils or any other ailment they can dream up. Mr Hare is the ideas man while Mr Burke is more hands on. As the famous Dr Knox (Tom Wilkinson) is having trouble getting hold of fresh corpses for dissection from the gallows, he has to look to other suppliers to fulfil his requirements. At the same time, one of the lodgers in Mrs Lucky Hare’s (Jessica Hynes) boarding house passes away and our heroes are tasked with disposing of the body. After selling the corpse to Dr Knox, a candle lights up (well, they probably didn’t have electricity back then) in William Hare’s brain at the sales opportunity that presents itself. The only problem is that there doesn’t seem to be too many dead people around – yet. The rest, as they say, is history (imagine reverb here).

The tone for the film is set nicely with the use of ‘Scotland the Brave’ played up tempo on the bagpipes over the opening titles and shots of period Edinburgh - with real snow in the air. Right from the start you know that this is a tale told with its tongue firmly planted in its cheek. We’re introduced to the Hangman, Angus (it’s our old mate Bill Bailey with a pretty good Scottish accent), who bemoans the fact that he now can’t sell the bodies of his ‘clients’ due to a new Bylaw forcing him to give them (against his religion) to the Scottish Royal College of Surgeons Lecturer and foot fetishist Dr Monroe (the magnificent Tim Curry) – leaving his best customer Dr Knox short.

As Messrs Burke and Hare prosper due to the prevailing market forces and availability of ‘nearly dead’ victims, Burke falls for actress Ginny (Isla Fisher) and undertakes (geddit?) to finance her forthcoming all female production of ‘Macbeth’ – oops, sorry ‘The Scottish Play’. Must throw salt over my shoulder now. At the risk of offending feminists everywhere, it’s just this kind of slightly ridiculous premise that adds to the fun. Around about now, someone with adenoids usually raises a finger and says, “Er actually, there was an all female production of ‘Macbeth’ performed at the turn of the 19th century in Edinburgh.” It’s that Smart Alec again.

The comedy in ‘Burke and Hare’ is a great mix of slapstick, controlled buffoonery, sight gags and coinciding events. I felt it worked quite well because, strangely enough, I found the two titular characters quite likeable. As Hare does most of the scheming and planning, you’d think you might find him immoral, but in fact he comes across more as amoral. To him, it’s all just business and maybe ‘Burke and Hare’ is really just a sales and marketing training film in disguise.

The movie is full of great faces like Reece Shearsmith (League of Gentlemen), Hugh Bonneville (Notting Hill), Sir Christopher Lee (you don’t really want me to tell you who he is now, do you?), Paul Whitehouse and Stephen Merchant. Much praise must go to Ronnie Corbett as Captain Wee Tam McLintock of the Edinburgh Militia who is hot on the trail of the grave robbers for most of the picture accompanied by his two riflemen – one of whom has the unfortunate habit of fainting at the wrong moment.

The cast make brave stabs at the Scottish accent and most, including Sir Christopher Lee carry it off well. Only Isla Fisher, very pretty though she may be, gives her Australian origins away occasionally – although her parents were both Scottish. Many will ask why Scottish actors weren’t used – as well they might – for there are many fine thesps north of the border, but it all comes down to audience exposure. An international audience may never have heard of them and that’s what puts bums on seats.

The film is released under the recently resurrected Ealing Studios banner and ‘Burke and Hare’ continues the tradition of dark comedy like ‘The Lady Killers’ and ‘Kind Hearts & Coronets’ from the heyday of the studio but for a modern day audience. Some may consider it sacrilege to mention the three films in the same sentence, but come on, it’s a bit of fun. John Landis does a good job of keeping the pace up for the duration, without sacrificing the need to tell the story well. His ardent fans might say it’s not a patch on some of his other work, but it’s just that bit different.

I thoroughly enjoyed ‘Burke and Hare’ and would wholeheartedly recommend it to anyone who likes dark chocolate rather than the milder milk. The gore isn’t overdone and the occasional dismembered limb isn’t too ‘in yer face’. It didn’t upset me at all and I’m a bit squeamish, having shot a hip replacement operation for a medical film many years ago which put me off eating meat for months. Anyway, it’s not a film that sets out to be taken too seriously. The script and the cast never let you forget that – which makes it all a great deal more light hearted. Upon its Cinema release, it seems to have been a bit of a ‘Marmite’ movie. People either loved it or hated it. Hopefully its release on Blu-ray will give a wider audience the chance to make up their own minds. Go on, be brave! Give it a spin.