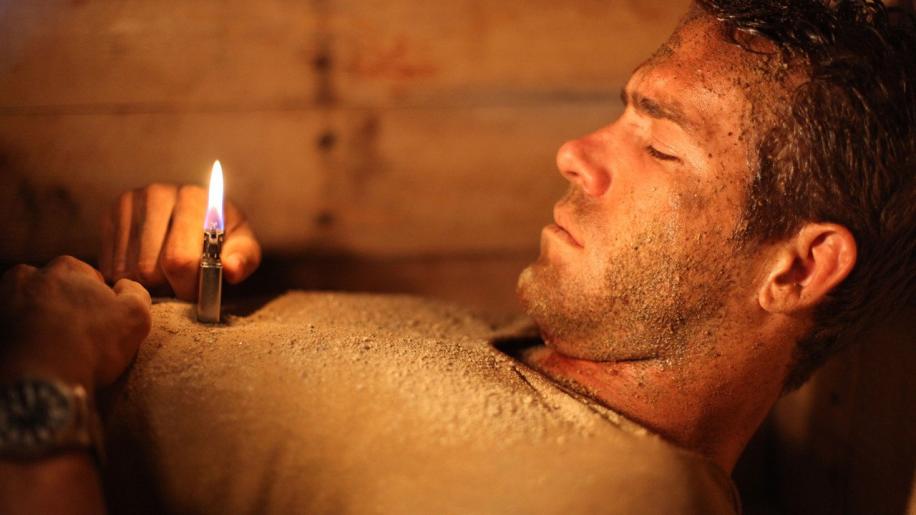 It’s amazing what you can do with a simple premise: whether it be a single set where two complete strangers are handcuffed to opposite ends of the room (which is basically what the majority of the first, and best, Saw movie was about), or a mother and daughter confined to their own secure room as a group of robbers attempt to gain access (Fincher’s underrated Panic Room). The claustrophobically confined ideas don’t always work as well – I was quite disappointed with Phone Booth, and have heard terrible reports about Devil – but the pattern is definitely more hit than miss, and works particularly well for indie filmmakers who may not have much money, but certainly have no shortage of intelligent, original ideas (that is, until Hollywood gets its fingers into them). I mean, look at Cube, essentially limited to one repeated set, and yet boasting some of the cleverest ideas you will ever come across in a mystery thriller. Buried takes things to a whole new level – here we’re not limited to the confines of one room, but actually the restrictions of a coffin, buried underground. I had heard good things about the movie, although I was seriously wondering how they were going to maintain tension and interest in a full-length movie centred around just a guy trapped in a coffin. Well, I’m here to tell you that they did pull it off. Buried may not be a film you’re likely to revisit anytime soon, but it is also probably unlike anything you have ever seen before.

A man wakes up bound and gagged in a coffin, buried underground. He can’t quite remember what happened before he ended up there, and doesn’t know who put him there. Struggling to move, he finds a zippo lighter in his pocket and a nail protruding out of the corner of the coffin, and attempts to use both to free himself from his rope bonds. Smashing against the coffin lid and screaming out for help, he gets absolutely no response, except a trickle of sand seeping through the cracks in the wood. And then a mobile phone rings by his feet.

Young Spanish filmmaker Rorigo Cortés Directed and Edited this 94 minute mystery suspense thriller, crafting an extremely tense, inherently claustrophobic movie based on an excellent premise and a minimalist story, which is basically one guy, in a coffin, making frustratingly desperate phone calls as his lights and battery die down. It really comes down to little more than that, and it is a testament to daring filmmaking that Cortés manages to wring every last drop of tension out of such a limited setting, engaging the viewer using simple ideas: surprise noises, unreliable light sources, and the very real threat of running out of oxygen. But his best move was to find a decent enough actor to sustain your interest, and carry you on this journey entirely single-handed.

I’ve always enjoyed Ryan Reynolds’s performances, even if they are normally just supporting roles in movies. He looked like he was the only one who actually had any fun on the set of the anticlimactic Blade: Trinity – the gorgeous Jessica Biel was too busy pouting and Wesley Snipes was too busy sulking over his paycheque; whilst Reynolds had all the best lines. He was engaging too in Carnahan’s ensemble Smokin’ Aces, even if he was just one of many star players, and he brought a similarly great wit to X-Men: Origins – before they sewed his mouth shut. Literally. I think Reynolds is great fun to watch, with humour and humanity to his performances, and none of the overt I’m-tougher-than-the-rest-of-the-world traits that many of his action persona counterparts usually have. But I was never sure about his taking the lead in a movie – the upcoming Green Lantern will be an interesting test to this theory, particularly since it’s not one of the most popular comic superheroes – and I certainly did not think he’d ever get lumbered with carrying an entire movie single-handedly.

As the central protagonist in Buried, the whole film rests on his shoulders (much as it did with the excellent Sam Rockwell in Moon). As a viewer, you experience everything through him, picking up little bits of information through his desperate phone calls, watching his agony and torture as he strains and twists his way around in the tiny box. And, most importantly, he doesn’t play it as a lily-white American hero. He character clearly has demons, clearly has some very natural responses to the position he’s in – can even be a bit of an asshole sometimes – and it works really well because you’re trapped in the box with him. You’re confronted with the same frustration, desperation and anger as he is, faced with the same shocks from your captors or the same bureaucracy from your supposed allies. It’s a one-man performance, and I dare say there are probably few people who could have pulled it off with quite as much aplomb as Reynolds. He’s not going to win an Oscar for it, and I dare say he’s highly unlikely to ever win an Oscar, but this certainly shows that he’s got a hell of a lot more to offer than just his previously established cheeky wit and effortless charm.

You’ll likely wonder within the first few minutes whether or not Cortés can pull off this massive feat – is he really going to shoot the whole film within the confines of a coffin? But he miraculously does exactly that, shooting from crazy angles to reflect the claustrophobic nature of the incarceration, ingeniously adopting different light colours in a realistic way, despite the setting, and using absolutely every single trick in the book to pull it off. I don’t think the film is perfect at all: its narrative is, after all, extremely limited, and you have to be quite a forgiving viewer to make it through to the end, particularly when you kind of hope for much grander conspiracies than are ever actually realised. You’ll also often ask yourself whether you’d do things differently: most notably in the telephone conversation with the lawyer (the only recognisable telephone voice, played by Stephen Tobolowsky of Groundhog Day fame “Watch out for that first step, it’s a doozy!”) – why would you even waste your battery on his pathetic questions? – and you’ll wonder whether the threats from the victim’s captors are all that possible to realise (what are they going to do? Dig him up, torture him, and then bury him again?), but overall it is a splendid exercise in pure desperation and slow-burning realisation. Is it totally and utterly exhausting? Yes. Will you want to watch it again in the near future? Not really, it’s a bit of a one-watch movie – after you’ve survived it and made it to the end, there is little to draw you back in and watch it again, you would have picked everything up the first time around. Does that make it a worse movie? Only in terms of rewatch value. And, honestly, you’ll still likely want to show it to your friends, so this isn’t necessarily a movie just designed for rental.

Whatever you decide, know that Buried is a thrilling, tense and stressful experience – an extremely clever movie which shows, in classic Hitchcock style, what you can do with a great idea, a game actor, and a decent video-camera. Following on from 2009’s Moon, and last year’s Monsters, independent filmmaking has never been as breathtaking as it is now: rich with innovative ideas, edgy performances and effective realisation. There’s no doubt that everybody should see this movie, or rather, experience this movie. It’s likely (and hopefully) as close as any of us are going to come to being buried alive. Recommended.