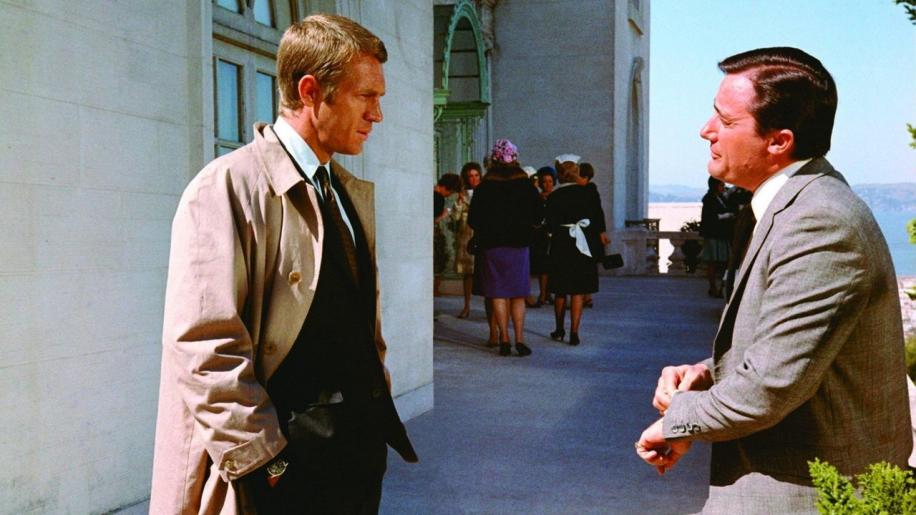 The anamorphic 1.85:1 picture is good quality with lush colours and clarity. There's a certain amount of grain but the transfer is relatively free of edge enhancement or mpeg artefacts. The print has little damage and the late 60s film stock is transferred well. San Francisco looks fantastic in the daylight, feeling both cold and windy, while still looking bright and sunny. Occasionally some night scenes suffer from bad contrast but it's the exception rather than the rule. It's a 5.1 Surround mix but there's not that much in the way of surround work. The dialogue is nice and clear and the score comes across well, but practically everything is front and centre channel oriented and there's little panning or bass. Bullitt is not really an action film so there's not that much in the way of effects, but shotgun blasts sound good, as do speeding cars. The chase scene has no music once it gets going, only the snarl and throb of big bore exhausts and the squeal of brakes, and it sounds great! Had the audio been feeble at this point I would have been genuinely disgusted! It's a pretty decent set of extras. The first disc which contains the film has a lively commentary by the director Peter Yates who discusses relevant points with a lot of enthusiasm. He often keeps talking about a subject long after the scene has ended simply because he has so much to say, so it doesn't lapse into the bland repetition you often find on commentaries. There's also the original theatre trailer, which I always find a nice addition to an old film.

The second disc has two feature length documentaries, and a vintage featurette. The first documentary, 'Steve McQueen: The Essence Of Cool' is basically a look back on Steve McQueen's career and was funded by the Turner Classic movies channel. It's a pretty good watch and a nice piece on the guy. Being an hour and a half in length it covers practically everything you would want it to. Not bad at all.The second documentary, 'The Cutting Edge' isn't based on McQueen or Bullitt, it's based on the art of film editing and while having only a tenuous link to this particular film (Bullitt won a best editing Oscar), it's a welcome addition nonetheless. It's another meaty documentary, weighing in at over an hour and a half, and most of the talking heads are Hollywood luminaries like Steven Spielberg, Chris Columbus, Joe Dante and suchlike. Made in 2004 it illuminates the mysteries of film cutting with numerous scenes from various films. These range from early examples of stylish cutting like the steps scene in 'Battleship Potemkin', to the more frantic cutting of fight scenes in modern action films like those proffered by a certain Mr. S. Seagal. It's an engrossing documentary and one that you probably will watch more than once.

A nice little featurette from 1968 is the final extra - 'Bullitt: Steve McQueen's Commitment to Reality'. The filmmakers went to lengths to ensure Bullitt was an authentic looking film and this covers some of the methods used. They used doctors and nurses in walk on roles for the hospital scenes for instance, and genuine stuntmen in several roles as baddies. In a similar manner, Steve McQueen insisted on doing all the stunt driving himself, as he was a bit of a dab hand behind the wheel, so this made it easier for the director to shoot the chase scene as you could see 'Bullitt' was driving at all times. I can't imagine that carry on being allowed these days! I found the narration to be unintentionally comical because it's done in such a straight-laced manner by that guy with the gravely voice who seems to have done voice overs from the beginning of time. What a voice, he must have been the most over employed person in Hollywood! For once the Special Edition tag is worthwhile, even without an extended/different cut. Bullitt has a very good transfer and the special features disc is practically worth getting by itself for the two top notch documentaries. File Bullitt alongside 'Dirty Harry' and 'The French Connection' for a trilogy of classic, ground breaking cop thrillers.