Bullet to the Head Blu-ray Review 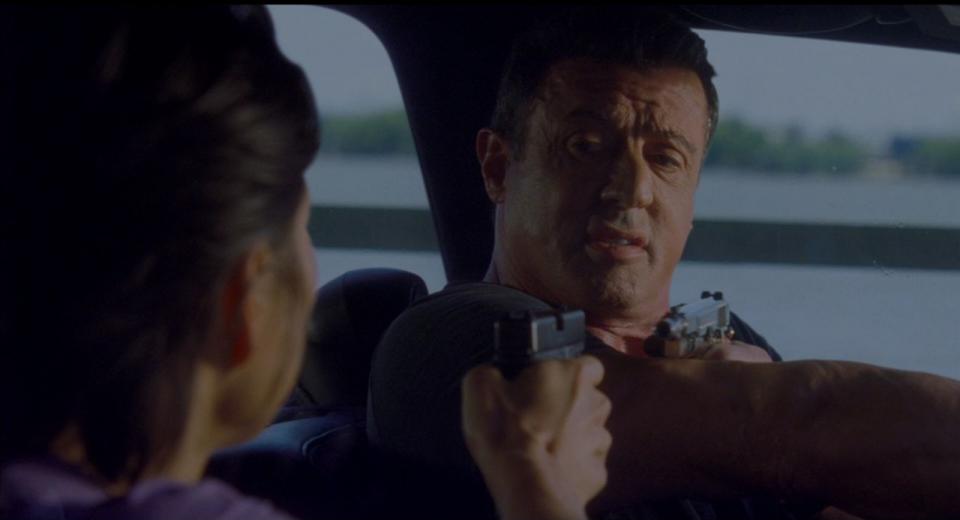 “Are we gonna fight, or do you plan on boring me to death?”

Well, Hill set and shot most of his film in New Orleans and it certainly looks as though it has been lensed through a greasy sheen of Louisiana sweat. The 1.85:1 BD transfer comes via AVC and looks pretty much the way it did at the flicks. Whilst I cannot put much fault at the feet of the transfer, barring a slight issue with some aliasing, the image still looks quite drab, hazy and bland. Which is just how it looked theatrically. This is not a colourful film – partly due to its gritty neo-noir aesthetic of muted, downplayed and seedy, smoke ‘n’ liquor imagery and partly due to a softened contrast that encourages lazy sunshine and vapid, heat-stifled night-times that lack the truest blacks and don’t allow shadows to dominate – and the picture looks appropriately stifled and earthy.

Primaries don’t burst from the screen – even the neon signs and the red laser-sight beams seem a little subdued in actual vibrancy. Skin-tones are swarthy, with everyone appearing with exactly the same tan. Eyes do not sparkle. Highlights are few, with only a couple of sunny vistas brave enough to intrude upon Hill’s dingy world.

Grain is present, but it can fluctuate. Now there are some stylish shots, flashbacks and the like, that go all sick and sepia, and there are others that simply soften. But, a couple of times, grain suddenly moves in for a frame or two, and then is smoothed out in the next shot. For instance, when Jimmy first meet Kwon in a bar. A close-up of Stallone is as grainy as hell, the middle-shot that follows crisp and sharp. I’m sure it is source-related and very possibly deliberate, but this sort of thing can occasionally stick out and lead to an inconsistent overall image. The contrast, as I say, isn’t tight, but it suits the film, and the blacks, whilst not the best, certainly can add some solid depth when required.

The image still presents a reasonable degree of fine detail, which means that close-ups of Stallone offer crags, cuts and crevices aplenty. Although that body is exquisitely chiselled – and a genuine inspiration that means age truly can be wrestled back – his face, which was always lumpen and interestingly asymmetrical, has now become as immutable as a stop-motion creation that has been left out to bake in the sun for several weeks too long. There are some good close-ups of Christian Slater, too, with some boyish stubble nicely defined.

A body opened-up on a slab in the morgue yields some graphic rendered and detailed viscera. But this is not a picture that delivers much in the way of crisp clarity. Some points of interest occur in the masked ball at Baptiste’s exclusive party – their identities may be disguised, but most of the women are parading about in the buff – with lots of golden masks and overtly theatrical embellishments. A team of mercs opening-up with fully auto fire and laser-sights provides some neatly delineated red beams and crisp orange muzzle-flashes that look great cutting through the gloom of night-time in the bayou.

Finally, I encountered no issues with edge enhancement or banding. This is a reliable and faithful transfer ... sadly of a film that just doesn’t look very nice. Without threatening the stranglehold that Lionsgate have around the neck of home video sound mixes, Bullet’s DTS-HD MA 5.1 track still provides a lot of bang for your buck. As you will appreciate, the sound design is stuffed with gunfire and solid, meaty impacts and toils consistently down in the lower regions. A dainty affair, this is not.

Remember how Clint Eastwood’s voice suddenly turned all gravelly in Tightrope and then became a granite-chewing rasp in Heartbreak Ridge? Well, Stallone’s voice has also undergone some radical evolutions too. That famous mumble is in full effect, but the timbre and depth of his speech has become extraordinarily low and guttural. By the time Expendables 3 blasts its way onto home video, you may need another subwoofer to cater just for Sly’s voice! But, having said this, there should be no trouble understanding any of his dialogue, or that of anybody else for that matter. It all comes through crisp and clear, with lots of clarity, personality and nuance.

And since we were speaking of the sub, it gets a nice little workout courtesy of a fair number of unforgiving melees. Handguns roar, assault weapons hammer out their staccato anthem, and there are a good couple of whooshing explosions to spice things up a bit. Both of which deliver deep, rumbling gut-punches and send out floor-worrying tremors. Shots in confined spaces deliver a more claustrophobic kick, such as the sequence in the bath-house.

Ample rear-support adds to the atmosphere. There are some echoes and gunshots that whistle and thud around behind you, vehicular movement lurching across the set-up, and the sounds of various scraps issue audible bruising from all around. Keegan’s single-handed assault on a bar full of goons, and his Casino Royale-like brawl in the men’s room boasts some impressive crashes, bangs and wallops that spread out around the environment. The axe-fight is where all of this comes to a crescendo of clanging steel, flinch-worthy jaw-sokking and vicious, reverberating body-slams into unyielding girders.

Incidentals like the hubbub in Baptiste’s masked shindig, and the ambience within the various bars and the cop-shop make some inroads into realism, with chatter and whatnot emanating from wider vantage points. There’s some shattering glass – Jimmy firing through a car window at point blank range, Keegan slamming his hand through the case holding the fire-axes – and this is agreeably shrill and scintillating. Even the sound of the tattoo drill buzzing away is well-placed within the mix.

Bullet to the Headis a macho actioner. Your neighbours will have no trouble believing that. You’re kidding me, right? Is this all we get? One poxy micro-featurette.

I know the film didn’t do so well theatrically, but I would have thought that Stallone, at least, would have been up for providing a commentary track or something. Sadly, all we get is an exceedingly poor slice of puff-pasty promo that clearly dates from the time of the film’s production wrap … which was actually a long time ago. This ramshackle affair, with soundbites from Sly, Momoa, Kang and Hill is massively stretched out with copious footage from the film, and pretty much establishes the fact that everyone had a great time working on it and working with one-another. Momoa is obviously still optimistic for his portrayal of Conan in what turned out to be a woeful outing for the once-mighty Cimmerian, which cannot help but date the show even further and damage what precious little critical clout it may have accidentally contained.

An utter waste of nine minutes of your time. For some reason, it becomes the norm to place Bullet to the Head alongside Arnie’s The Last Stand as though they have both been cultivated from the same blood-soaked experimental soil. The truth of the matter is that Arnie’s film is a comeback whilst Sly’s is merely another vehicle for the unstoppable action star. He hasn’t been away from the genre since he banished memories of that couplet of comedy missteps with the supreme Cliffhanger back in 1993. And whilst Arnie is definitely doddery now, the Italian Stallion still carries immaculate screen presence, packs a helluva punch and looks hideously sensational.

Teaming up with 80’s macho-movie demigod Walter Hill has been a long time coming and, arguably, Sly’s debut with the man behind The Warriors, Southern Comfort, 48 Hrs, Red Heat and Extreme Prejudice is all rather mundane and by-the-numbers. Fans of both merchants of mayhem will surely find plenty to enjoy and I, for one, enjoy it immensely. But then I could possibly the biggest and most devoted fan of them all. Stallone owns the movie and it is something of a shame that Jason Momoa wasn’t permitted to grow as a proper nemesis for him. As it stands, the Klingon-visaged behemoth is intimidating and violent enough, but the screenplay only throws him the odd bone to gnaw and the actor shows glimmers of a depth that has been denied. The oft-mauled relationship between Sly and sidekick Sung Kang has been unfairly drubbed. Kang has also been sold-out by a script that reduces his rule-book flaunting detective to little more than an irritating stooge, but he makes the most out of his fact-finding part in this offbeat duo.

The Blu-ray is hardly stellar. Even if the transfer is largely faithful to the image I saw at the flicks, it is grubby, sweaty, and drained of vitality. Some aliasing dogs a couple of smackdowns, but the video is technically fine. The audio is nicely aggressive, and boasts some muscular-sounding set-pieces. There are certainly better and more adventurous sound-mixes out there – and a lot of them wrapped around Stallone films – but this is still good, solid stuff that delivers some appreciable oomph. But the dearth of extras is a big letdown. With Walter Hill getting involved with the BD releases of other films of his, and Stallone normally wallowing in home-video promotion, the woeful lack of anything other than a pathetic EPK featurette is truly annoying.

But, overall, I can’t help but recommend Bullet to the Head for those who know and appreciate such shallow masculinity and brazen escapist delinquency. Short, sharp and savage, it’s a bludgeoning, sweaty saga almost completely sans good guys. It kicks like a mule and has the impact of a bullet to the ... ahhh, you get the picture.