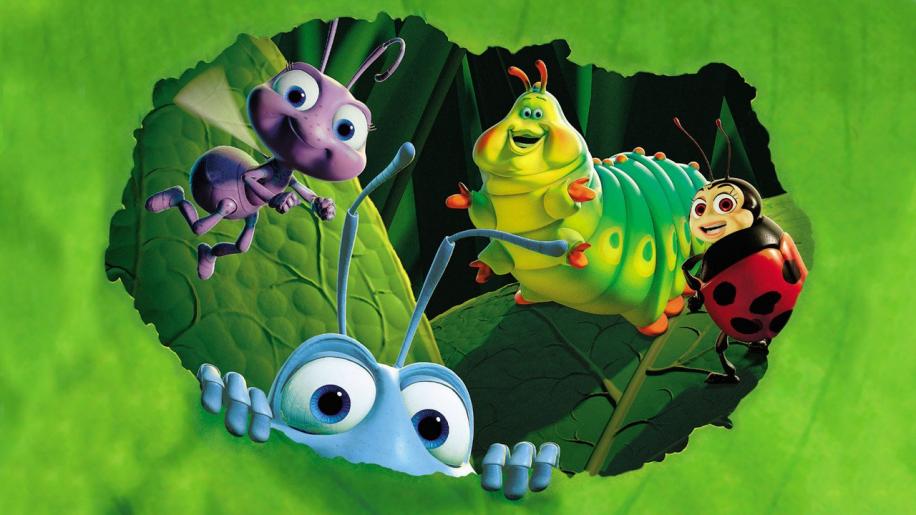 Mastered directly from the digital source, the highlight for anyone who currently owns the original Region 1 edition is that this is released in anamorphic widescreen. Yes, that's right, no more manual zoom on widescreen sets people! In a word this is simply stunning. From the opening credits, where we see a zoomed out shot of the island of the ants detail and vivid, solid colours leapt out of the screen. It's sharp, it's utterly clear and both the greenery and the blue tones of the ants are displayed with depth and contrast that rivals Pixar's more recent releases (and dare I say it, this looks better than Finding Nemo).

Even when things take on a darker tone, and we descend into the bowels of the ant hive and when Flik is in the Bug City, the shadows and darker colours look utterly convincing with a flawless presentation, offering depth and detail that looks incredibly filmic.

Edge enhancement is absent (thank you Pixar), as are compression artefacts, and the whole presentation exudes quality. It may be an old film now, but even still, you'll be hard pressed to beat this THX presentation.

Thought the sound on Finding Nemo was good? Well it might just be worth revisiting A Bug's Life, because this is still reference quality audio by anyone's standards. Buyers of this Collector's Edition will be spoilt by the inclusion of both 448kbps Dolby Digital 5.1 and 768kbps DTS 5.1 soundtracks, something which is missing from the Region 1 counterpart.

Both soundtracks offer a stunning multi-channel presentation which - given suitable equipment - will happily compete with anything that's released today. The channel usage is liberal but never overpowering, with dialogue moving effortlessly around the room in line with the onscreen action, and always clear and defined.

Placement is the word here, and whether it be the ambient buzz of undergrowth, or an ant's footsteps, or the screeching predator that is the Robin, effects wrap around the viewer with an enveloping 3-dimensional mix. LFE is used appropriately, and there are several moments which will test the quality of your subwoofer - from the disappearing offering (hear the crackle and rumble as the season's hard work tumbles into the water), to the rain storm which will have even the most jaded viewer ducking for cover, the bass will roar through the room with tightness and depth.

Superb sonics then, by anyone's standards, but how does DTS compare to Dolby Digital? Well I always thought that the Dolby track on my standard Region 1 version was superb, and indeed that's still the case. I flicked through a number of keys scenes of varying tempo and the overall conclusion that I can draw is that the DTS track is slightly “brighter” and a touch louder than its Dolby counterpart. Given blind side-by-side testing you would be able to spot the differences, and much will come down to listening volume and whether your room sounds quite bright, but regardless of choice, it's reference quality all the way.

Here we have a wealth of extras, packaged neatly onto disc 2. Both the original Region 1 and 2 releases of A Bug's Life were lightweight on additional material, so it's a pleasant surprise to see a feature packed list. But are they any good?

The disc is broken down into several sections: Pre-production, Production, Sound Design, Release, Outtakes and finally Geri's Game. Starting with pre-production, first up is a bizarre short called the “Fleabie Reel”, which includes John Lasseter in some live action work and some basic, early animation - this whole feature is rather passable and low quality.

Next, we leap in quality terms to the meat of this section, and this includes elements of “Story and Editorial”, “Research” and “Design”: we get an extensive look into the storyboarding process, including some ditched elements, and more interesting is footage of the team's research video, of ants and insects shot with micro cameras: we see how this really set the benchmark for the perspective of the whole movie. Also here is a host of artwork and 3-dimensional models, showing the progression from paper to final product for characters and locations in the film.

The production section contains three featurettes which cover a “Behind the Scenes” look at the movie in progress, a “Voice casting” section which shows us all of the real life cast spliced with clips from the movie (and it's really quite freaky that the actors and actresses look similar to their onscreen characters) and “Early tests” which shows sample animation clips of the ambient environment movements along with shadow and lighting tests. Finally here we have a “Progression demonstration”, an interesting section which uses the angle function (finally I've found a DVD that uses it!), and shows us 4 stages of animation (and you can flick between all 4).

Next up is sound design, which I found fascinating. Essentially it shows how a number of individual sounds were pulled together (and from where) and then clips from the movie itself showing how they all fit together: amongst other things, you'll find that one of the flying bugs sounds is a combination of a real Huey helicopter mixed with bubble wrap. Ok so it's nothing ground breaking, but interesting nevertheless.

The “Release” section shows trailers for the theatrical and video releases, and also contains poster art, with the highlight being a brief “Character interview” section which Pixar made specifically for the film's release.

Outtakes contains the same material that you'll have seen on previous releases - two sets of frankly hilarious mock-outtakes and a short documentary where we find out how these came about (and the crew's favourite ones!), and wrapping the package up is the stunning short “Geri's Game” - and if you're familiar with Toy Story 2 you'll recognise the main character immediately.

Overall this is an excellent set of extras which does the movie justice: recommended, especially if you're a fan of animation.Wonderful movie, great DVD. Don't own it? You should, but it's not worth it for the DTS soundtrack alone.